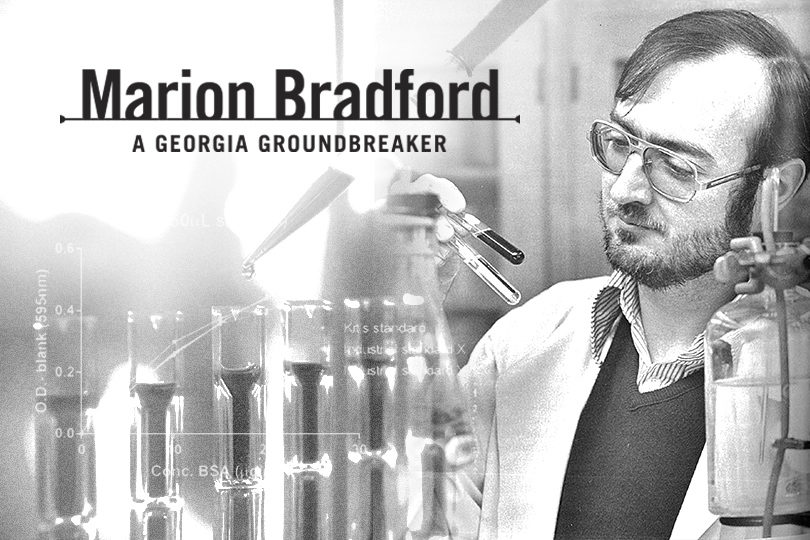 Marion Bradford’s work has been cited more than 206,000 times.

UGA alumnus has one of the most cited research papers on record.

Biochemist Marion Bradford spent most of his career developing new ways to use a common item found in kitchens and nurseries around the world—cornstarch.

For decades, Bradford worked to convert cornstarch into a renewable energy source that could replace fossil fuels and produce everyday products ranging from food, feed and fiber to chemicals and industrial fuels.

He was part of a team recognized in 2003 by the U.S. Environmental Protection Agency and the American Chemical Society for creating an organic compound from corn sugar used in carpet fibers, cosmetics and liquid detergents that helped reduce the global economy’s reliance on petroleum-based materials. The organizations praised the team’s contributions to the “welfare and progress of humanity.”

But it is his research on the seventh floor of the Boyd Graduate Studies Research Center at the University of Georgia in the 1970s that will be his legacy. A theory he pursued because he thought it would save scientists time in the laboratory turned part of his doctoral dissertation into one of the most cited scientific papers in history—and invented an analytic process that revolutionized biochemical research.

“I look back and say, yep, that is what I am known for,” said Bradford, 72, who developed the Bradford protein assay, a process that is still being used in laboratories around the world to detect proteins in tissue samples. “It made life a lot simpler.”

One of the most cited research papers in history

According to an article published in Nature in 2014, if you put a printout of the first page of every paper listed on Thomson Reuter’s Web of Science that cited Bradford’s research paper and stacked them up, the pile would almost reach the summit of Mount Kilimanjaro.

Five years ago, Bradford’s paper had been cited by other scientists 157,683 times and was one of only three to achieve more than 100,000 citations. Today, it has jumped to 206,088 citations and counting, which makes Bradford one of only a few scientists in the world whose work has been recognized at this rate and used by others—in the evolution of science—to provide credibility for their research and scientific knowledge. 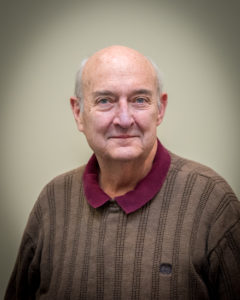 Looking back more than 40 years, Bradford, who is retired and living in Hendersonville, North Carolina, talks matter-of-factly about how the discovery—which is done in a test tube in one simple step—came about. His friend, a postdoc working next to him, was reading a published paper on a dye, Coomassie Brilliant Blue, and how it changes colors when it binds to a protein.

At the time, an assay that could provide an instantaneous reading on proteins seemed out of reach. Proteins are important because they do most of the work in cells and can either help fight infection and keep people healthy or cause damage and serious illness.

The method being used at the time was a multi-step chemical reaction, Bradford said, and it took up to two hours to complete.

But, he thought, if Coomassie Brilliant Blue—first developed for use in the textile industry—could be used to stain wool sweaters instantly, it should be able to stain proteins in a solution as well.

“I took the concept that was being used and changed it to a liquid form, came up with a new formulation that would allow it to stay in the solution, bind to the protein, and change colors instantaneously,” he said.

The discovery led to a patent

Bradford’s discovery using Coomassie Brilliant Blue G-250 was patented in 1976. The professor working with Bradford told him that he could be the sole author on the research paper since he was doing it outside of his fieldwork of reproductive biochemistry, but the professor wanted to be included on any patent.

Christopher West, who chairs the department of biochemistry and molecular biology at UGA’s Franklin College of Arts and Sciences, was a graduate student at the California Institute of Technology when Bradford developed his assay. Suzanne Barbour, dean of the graduate school at the University of North Carolina and a professor of biochemistry and biophysics, was in junior high school. 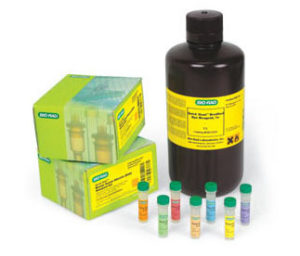 The Bradford Protein Assay is still a necessity in many labs around the world.

Barbour calls the Bradford assay the gold standard. West says it is a critical research tool that provides scientists with a quick reading on the concentration of proteins in any sample—a necessary procedure for researchers, whether using it to detect illness, for drug development or to study the relationship between plant protein and human nutrition.

“Anytime you do an experiment, you need to know how many proteins you have,” West said. “It’s like looking at the fuel gauge before going on a trip or deciding how much flour to buy before baking a cake. There are things you need to do first before you move on to what comes next.”

Both scientists suspect that Bradford didn’t realize the impact his discovery would have when he published his paper in 1976.

“For him it was probably a means to an end,” said Barbour, a former dean of UGA’s Graduate School. “I don’t think he realized that a gazillion scientists would be using this assay every day and that it would be something that revolutionized the way we do molecular biochemistry.”

Research was always his passion

Bradford always wanted to be a researcher, but it didn’t happen right away. After obtaining his Bachelor of Arts degree in chemistry from Shorter College in Rome, Georgia, in 1967, he taught middle school science and math for a few years. He also worked for the Georgia Department of Public Health in its clinical tuberculosis laboratory.

What Bradford realized during his time outside the lab was that pure scientific research was his passion. And he knew that to move forward, graduate school was a must.

“The research I wanted to do could have been in almost anything,” said Bradford. “But I knew that for the work that I wanted to do, I first needed a graduate degree. It was like getting a permission slip.”

So Bradford left public school teaching behind and spent his first wedding anniversary in 1972 standing in line at UGA signing up for graduate courses in foreign languages and biochemistry—an area of study in which he had never taken a single course as an undergraduate.

After Bradford received his doctoral degree in 1975, he stayed at UGA as a research biochemist until 1981, when the postdoc who first asked him about his thoughts on the use of Coomassie Blue told him that A.E. Staley Manufacturing Co. in Decatur, Illinois, was looking to hire.

Bradford got the job and worked for A.E. Staley—one of the largest processors of corn in the United States that merged with the British company Tate & Lyle in 1988—for the next 21 years. Afterward, he spent 17 years as a consultant with the Iowa Corn Promotion Board developing new uses and improving the sustainable production of corn.

He was part of the green, or sustainable, chemistry movement and patented new methods of converting carbohydrates from corn into materials that would replace the petrochemicals being used to develop drugs, preserve foods, create plastics, resins and fibers, and make pesticides and fertilizers. His “last hurrah,” he said, was being part of that Tate & Lyle and DuPont team that discovered the renewably sourced plant-based textiles.

Still, it is the Bradford assay, he knows, that will be at the top of his scientific accomplishments long after he is gone.

Bradford was recognized as a recipient of the 2019 Graduate School Alumni of Distinction award at a reception and dinner on Oct. 3.  The event was held in the UGA Special Collections Libraries in Athens. This award recognizes graduate alumni whose professional achievements and contributions to society exemplify the University of Georgia’s motto, “to teach, to serve, and to inquire into the nature of things.”