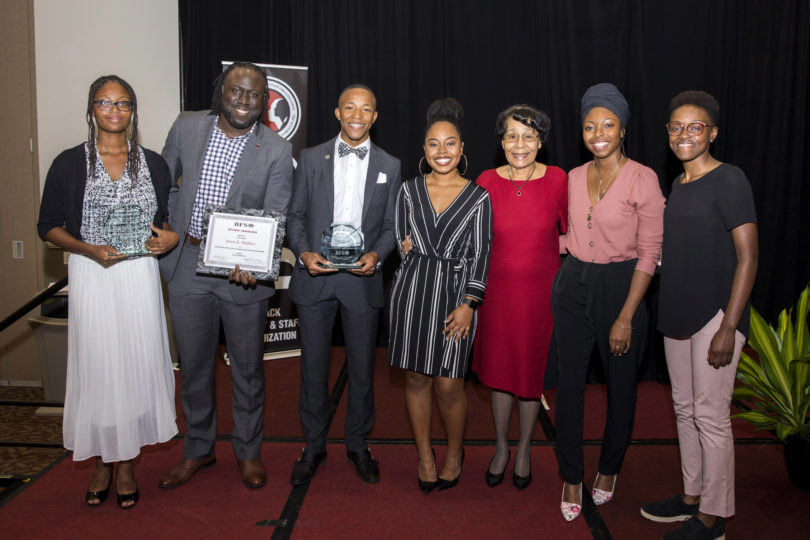 Mary Frances Early watched the unwelcoming crowds on TV with her mother as the University of Georgia’s first African American students, Charlayne Hunter-Gault and Hamilton Holmes, attended their first classes on Jan. 11, 1961.

She believed the two new undergraduates should be protected and was concerned when they weren’t. Just a few years older than they were at age 24, she knew then that she was “ready to do something.”

“I knew somebody needed to go and integrate the Graduate School,” she said on Sept. 25 during the Black Faculty and Staff Organization’s 17th annual Founders’ Award Scholarship Luncheon. “I felt a passion to do something, not to stand on the sidelines and wait for things to happen.”

Known as a “quiet trailblazer” during the civil rights movement, Early became the first African American graduate of UGA when she received her master’s degree in music education in 1962. She also earned an educational specialist degree from the university in 1967.

“Remember your roots. They remind you of where you came from,” she advised the students in attendance. “And remember your wings because they will take you to unbelievable heights if you believe in yourself.”

Six students and two staff members were recognized during the annual luncheon. UGA President Jere W. Morehead highlighted the importance of BFSO in advocating for the success of students at the institution.

“Many of you in this room have contributed to programs and experiences that help cultivate an atmosphere that is welcoming and nurturing for individuals of diverse backgrounds,” Morehead said.

He went on to announce that, earlier in the day, the university Cabinet had endorsed the proposal to name the College of Education in Early’s honor. The proposal now moves to the University System of Georgia Board of Regents for approval.

“We appreciate all that you have done for UGA and the impact that you have made on the lives of so many across our state and nation,” Morehead said, referring to Early.

The Ed Wilker Memorial Egalitarian Awards recognized two staff members. Mildred Anderson, human resources manager for University Housing, was applauded for her “unparalleled expertise.” Ashley Stevenson, a benefits specialist with Human Resources, was recognized for her “calming and personable demeanor” and value as a team member.