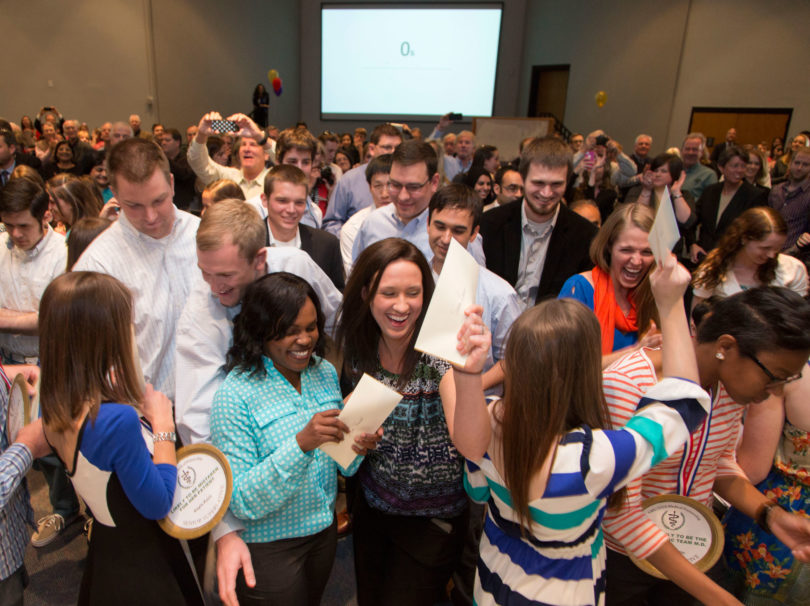 Athens, Ga. – “Match Madness,” a half-hour documentary that follows the lives of three students in the Georgia Regents University/University of Georgia Medical Partnership in the time leading up to their residency match day, debuts on WUGA-TV on June 16.

“This is a terrific, suspense-filled show that leaves you feeling good about the next generation of doctors,” said Patricia Thomas, who supervised this independent study project and directs Grady’s graduate health and medical journalism program.

“Match Madness” follows Brie Berry, Hammad Aslam and Ashley Austin, three members of the medical partnership’s inaugural graduating class, and shows them during the tense and stressful approach to March 21, the day when all graduating medical students throughout the country learn if they have been selected for their desired residency program.

Since 2010, four teams of health and medical journalism students worked on this project and together created more than 80 multimedia stories about the evolution of the GRU/UGA Medical Partnership and how it has changed the students, community care and research at the university.

Producers April Bailey, Katie Ball and Alicia Smith followed the medical students closely during their final semester of school and drew on archival footage shot by earlier teams dating back to August 2010.

This is the fourth half-hour documentary that health and medical journalism students have produced for WUGA-TV over the past three years. Thomas thinks it is also the best.

“All three HMJ students were committed to telling stories of the program’s first graduating class,” said Thomas. “Everyone shot and edited video, Alicia Smith did the lion’s share of script writing, Katie Bell narrated the show and April Bailey kept all the parts in motion. I’m proud of them.”

“Match Madness shows that this important new partnership not only can survive, it can thrive,” said Thomas. “Members of the first graduating class fared very well on March 21, and they’ll do their residencies at some excellent institutions.”

The show will air on WUGA-TV in North Georgia and western portions of North Carolina and South Carolina at the following times:

Match Madness is also available on the HMJ at UGA YouTube channel.

WUGA-TV
WUGA-TV is a partnership between the University of Georgia and Georgia Public Television. This effort is bringing quality television programming to North Georgia utilizing the resources of the World Channel. For more information, see http://www.wugatv.org.