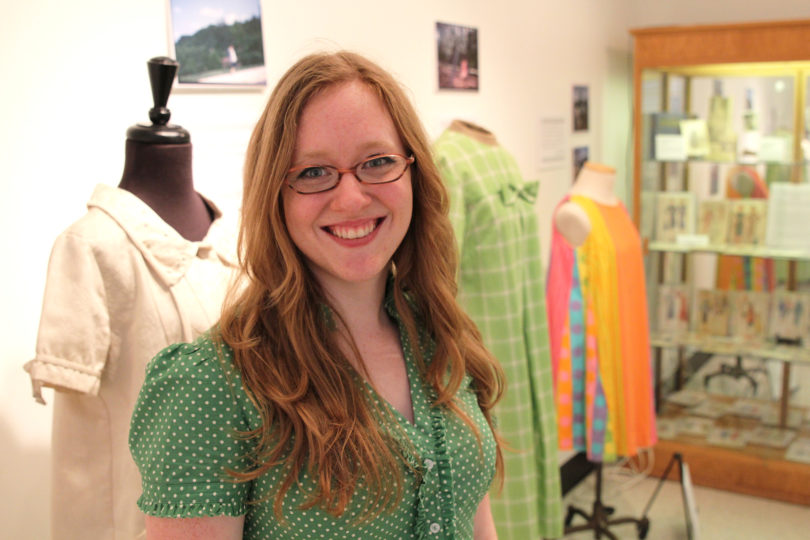 Athens, Ga. – Visitors to the University of Georgia’s Barrow Hall gallery will notice a unique feature among the dozen or so mannequins: prominent baby bumps.

Most of the garments, vintage patterns and photographs are from Calvin’s personal collection and highlight her passion for historic clothing preservation. Calvin is currently working on a master’s degree in the historical and cultural aspects of dress and textiles program through the College of Family and Consumer Sciences.

One interesting thing that can be seen in the exhibit, she said, is the evolution of the use of color in maternity clothing. While all dresses in that time period tended to be loose-before stretch fabrics hit the maternity clothing scene, maternity design was confined by the physical limitations of woven fabrics-the colors evolved.

The dresses start out very inconspicuous with the black 1890s dress and the beige 1919 dress.

“By the time you get to the 1960s trapeze dress, the colors are much more brilliant and veritably shout “look at me!” she said. “Although pregnancy was, most of the time, something that people were very excited about, there was a social imperative to remain inconspicuous during pregnancy-many of the women I interviewed said that they didn’t want to ‘show off.’

“You can see this mandate begin to relax particularly in the 1960s and 1970s, and the social changes are reflected in the colors of the clothing.”

Calvin made three of the garments herself from vintage patterns and two of the others are on loan, one from a family friend and another from a woman in Idaho who found out about Calvin’s exhibit via Facebook. The rest are from Calvin’s own collection, which grows by the month.

The exhibit also displays various quotes from women Calvin interviewed about maternity wear as part of her thesis. A sample, from interviewee Shirley Embry, who was pregnant in 1957, 1959 and 1960: “We just didn’t worry about being fashionable. We were pregnant, and that was it.”

The oldest garment in the exhibit, a black dress from the 1890s, is floor length and a gift from Calvin’s great aunt, who knew the grandson of the owner of the dress. After some online genealogy “stalking,” Calvin’s mother was able to determine the original owner of the dress.

Creating the baby bumps for the mannequin took a little creativity. One was purchased, one was carved out of Ethafoam, a substance similar to Styrofoam that’s safe for historic garments, and the rest are made from mixing bowls covered in quilt batting, Calvin said.

“Correctly displaying and supporting garments sometimes means that you have to think outside the box,” Calvin said. “I was walking around Wal-Mart trying to think of something to use, since I didn’t have time to sculpt them out of Ethafoam before the exhibit opened. I knew it had to be round and convex on one side while concave on the other to fit over the mannequin, and then I finally thought of a mixing bowl.”

Calvin also is a tireless seamstress, sewing many of her own clothes. She has well over 1,000 sewing patterns in her growing collection, using them both for sewing and for research, some of which she presented at the Costume Society of America regional conference last fall.

One of Calvin’s favorite garments in the exhibit is a blue dress from the 1890s that she got in a trade with a vintage dealer in Tennessee. Calvin got it in exchange for a pair of shoes.

“It’s pretty rare,” Calvin said of the somewhat tattered dress. “At-home/work garments like that have not survived as much since people usually only kept nicer stuff. It was used so much that it’s been worn out and patched multiple times. Apparently the (owner) either liked it a lot or was too thrifty to make a new one.”

The Barrow Hall gallery, 115 D.W. Brooks Drive, is located on the building’s second floor. To hear Calvin speak about the exhibit, visit https://www.youtube.com/watch?v=B8TxfmdYECQ.