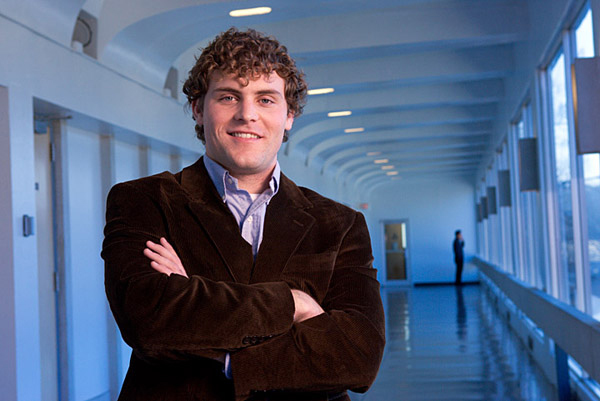 Matthew Crim, a senior Honors student from Cartersville, has been selected as a 2005 Marshall Scholar. This is the third consecutive year that a UGA student has received this prestigious award to study in the United Kingdom. A 2004 Truman Scholarship recipient, Crim is the first UGA student to win both the Truman and Marshall Scholarships.

Crim will receive both a bachelor of arts in political science and a bachelor of science in cellular biology in May 2005 and, beginning in fall 2005, he plans to attend the London School of Hygieneand Tropical Medicine. During his two years at the LSHTM, Crim will participate in two one-year master of science programs: public health (health services research) and health policy, planning and financing.

“I am tremendously honored to have been awarded the Marshall Scholarship,” says Crim. “In London, I will be exposed to issues from different perspectives and learn with students from around the world. I thank the university community and the many mentors and friends that have helped me to this point.”

The Marshall Scholarship program was established in 1953 to express the gratitude of the British people to the United States for its role in the Marshall Plan. Each year, Marshall Scholarships enable up to 40 young Americans of high ability to earn a degree in the United Kingdom in any field of study. The program allows the scholars, who are potential leaders, opinion formers and decision makers in their own country, to gain an understanding and appreciation of British values and the British way of life. It also reinforces the long-lasting ties between the peoples of Britain and the United States.

“Matt is an outstanding student scholar and a young man of the highest personal character who clearly belongs among that elite group of the nation’s most accomplished and promising undergraduates,” says President Michael F. Adams. “Having three consecutive Marshall Scholars is a great distinction , and we are very proud of Matt for the honor this brings to him personally as well as to the university.”