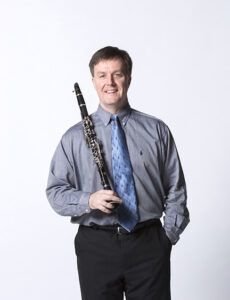 Acclaimed for “a remarkable technique, tone and lyricism,” clarinetist D. Ray McClellan will present a program with selections for clarinet and piano, followed by a variety of chamber music offerings and genres for his Faculty Artist Series concert. The concert will take place at 7:30 p.m. in Ramsey Hall on Feb. 8.

The title of the program is “Music with Family and Friends.” Collaborators for the concert include the debut of The McClellan Quartet, consisting of D. Ray and his wife, Erica McClellan, and their daughters, Rachel and Gabriella McClellan. A special addition to the program will also be Rachel’s violin professors/mentors Levon Ambartsumian and Shakhida Azimkhodzhaeva. The program will include works by Bach, Guastavino, Bassi, Finzi, Messiaen and Grainger.

McClellan is a former clarinetist and soloist with “The President’s Own” United States Marine Band. He has appeared internationally in recitals and as concerto soloist in Canada, Taiwan, Japan, Italy, Brazil, Kenya, Tanzania and the Czech Republic. He holds three degrees from The Juilliard School where he studied with David Weber.

The concert will also be livestreamed at music.uga.edu/live-streaming. Tickets and Faculty Artist Series subscriptions are still on sale through the Performing Arts Center box office by calling 706-542-4400 or visiting its website. Audience members are highly encouraged to wear masks if attending the concert in person.