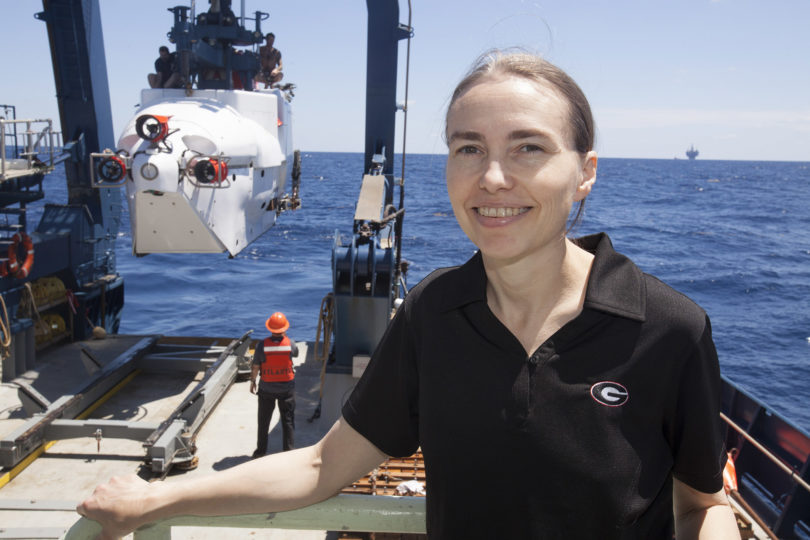 Athens, Ga. – Though they occupy a small fraction of the Earth’s surface, freshwater wetlands are the largest natural source of methane going into the atmosphere. New research from the University of Georgia identifies an unexpected process that acts as a key gatekeeper regulating methane emissions from these freshwater environments.

The study, published in Nature Communications by Samantha Joye and colleagues, describes how high rates of anaerobic methane oxidation, a process once considered insignificant in these environments, substantially reduce atmospheric emissions of methane from freshwater wetlands.

While anaerobic methane oxidation in freshwaters has been gathering scientific attention, the environmental relevance of this process was unknown.

“This paper reports a previously unrecognized sink for methane in freshwater sediments, soils and peats: microbially mediated anaerobic oxidation of methane,” said Joye, UGA Athletic Association Professor of Arts and Sciences and a professor of marine sciences. “The fundamental importance of this process in freshwater wetlands across broad biogeographic provinces underscores the critical role that anaerobic oxidation of methane plays on Earth, even in freshwater habitats.”

Joye noted that absent this process, methane emissions from freshwater wetlands could be 30 to 50 percent greater.

“This study furthers the understanding of the global methane budget and may have ramifications for the development of future greenhouse gas models,” said study co-author Katherine Segarra, an oceanographer at the U.S. Department of the Interior’s Bureau of Ocean Energy Management.

The research team investigated the anaerobic oxidation process at three freshwater wetlands in three biogeographical regions: the freshwater peat soils of the Florida Everglades; a coastal organic-rich wetland in Acadia National Park, Maine; and a tidal freshwater wetland in coastal Georgia. All three sites were sampled over multiple seasons.

The anaerobic oxidation of methane was coupled, to some extent, to sulfate reduction. Rising sea levels, for example, would result in increased sulfate, which could fuel greater rates of anaerobic oxidation. Similarly, with saltwater intrusion into coastal freshwater wetlands, increasing sulfate inhibits the microbial methane formation, or methanogenesis.

So while freshwater wetlands are known to be significant methane sources to the atmosphere, their low sulfate concentrations previously led most to conclude that anaerobic oxidation of methane was not important in these regions. The new study shows that if not for the anaerobic methane oxidation process, freshwater environments would account for an even greater portion of the global methane budget.

The research was supported by an award from the National Science Foundation Division of Environmental Biology. Additional financial support was provided by the Deutsche Forschungsgemeinschaft via the Research Center/Cluster of Excellence at the MARUM Center for Marine Environmental Sciences and department of geosciences at the University of Bremen, Germany.

The study is available at www.nature.com/ncomms/index.html by searching for DOI: 10.1038/ncomms8477.