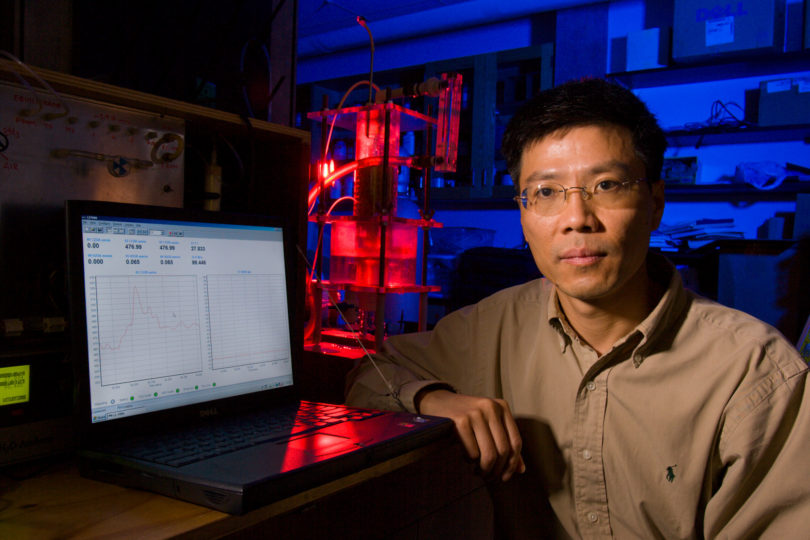 Ice-free Arctic Ocean may not be of much use in soaking up carbon dioxide, a component of global warming

The summer of 2010 was agonizingly hot in much of the continental U.S., and the record-setting temperatures refocused attention on global warming. Scientists have been looking at ways the Earth might benefit from natural processes to balance the rising heat, and one process intrigued them, a premise that melting ice at the poles might allow more open water that could absorb carbon dioxide, one of the major compounds implicated in warming.

Now, in research published in the journal Science and led by a UGA marine chemist, that idea may be one more dead end. In fact, a survey of waters in the Canada Basin, which extends north of Alaska to the North Pole, shows that its value as a potential carbon dioxide “sink” may be short-lived at best and minor in terms of what the planet will need to avoid future problems.

“The Canada Basin and entire Arctic Ocean are still taking up carbon dioxide,” said Wei-Jun Cai, a professor in the department of marine sciences in the Franklin College of Arts and Sciences and lead author of the study. “But our research shows that as the ice melts, the carbon dioxide in the water very quickly reaches equilibrium with the atmosphere, so its use as a place to store CO2 declines dramatically and quickly. We never really understood how limited these waters would be in terms of their usefulness in soaking up carbon dioxide.”

The research was a joint project with the Chinese government. Other authors on the paper published in Science include, from UGA: graduate student Baoshan Chen, research scientist Yongchen Wang, postdoctoral associate Xinping Hu and doctoral student Wei-Jen Huang. Colleagues from China and elsewhere who were co-authors include Liqi Chen, Zhongyong Gao, Yuanhui Zhang and Suqing Xu from the Third Institute of Oceanography of the State Ocean Administration of China; Sang Lee of the Korea Polar Institute; Jianfang Chen and Haisheng Zhang of the Second Institute of Oceanography in China; Denis Pierrot and Kevin Sullivan of the U.S. National Oceanic and Atmospheric Administration; Akihiko Murata of the Research Institute for Global Change in Japan; Jackie Grebmeier of the Chesapeake Biological Laboratory, University of Maryland; and Peter Jones of the Bedford Institute of Oceanography in Canada.

The carbon dioxide level in the atmosphere has increased since the Industrial Revolution, and around 30 percent of that CO2 has been absorbed by the oceans, which increases the acidification of the seas, causing changes in conditions for the growth of all life forms.

Melting in the planet’s arctic zone has been dramatic in the past three years. A recent paper predicted that the Arctic Ocean would be ice-free during summer in 30 years, Cai said. Researchers had predicted that increased areas of open water in the Arctic, while troublesome in many ways, might at least sequester increasing amounts of carbon dioxide because of summertime ice melts.

“This prediction, however, was made based on observations of very low surface water carbon dioxide levels,” said Cai, “from either highly productive ocean margin areas or basin areas under earlier ice-covered conditions before the recent major ice retreat.”

To see how efficient Canada Basin waters are in taking up carbon dioxide, an international team of scientists in 2008 boarded the retrofitted Chinese research vessel Xue Long (Snow Dragon) for a three-month research voyage. They studied the upper layers of the water into which they sailed. They also studied the waters’ salinity, temperature, nutrient concentration and chlorophyll activity.

What they found was that as greater areas of ice melt each summer, the Canada Basin’s potential as a CO2 sink will diminish dramatically mainly because of the rapid uptake of CO2 from the atmosphere. And because of this carbon dioxide uptake, the waters become quite acidic and “a poor environment for calcium-carbonate shell-bearing marine organisms,” Cai said.

The findings are at once intriguing and disappointing because carbon dioxide and other gases dissolve more readily in cold water than warm water, and so scientists had long thought that seas of melting polar ice would at least have the trade-off of being good places for the absorption of carbon dioxide.

Collaborative work of this kind between the governments of the U.S. and China on Arctic research is relatively new. Cai said it greatly benefits both parties.