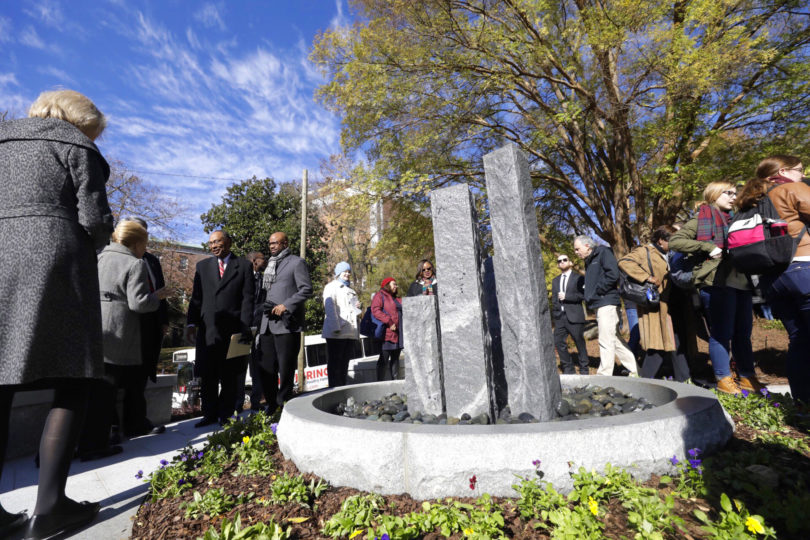 Participants gather to view the Baldwin Hall Memorial after a dedication ceremony on Friday, Nov. 16, at the University of Georgia in Athens. (Photo by Dorothy Kozlowski/UGA)

The University of Georgia hosted a ceremony on Nov. 16 to dedicate a new memorial at Baldwin Hall in tribute to those who were buried there.

“We are drawn here today by a deep sense of respect for these individuals and by a strong sense of duty to commemorate the lives they lived,” said UGA President Jere W. Morehead. “The memorial we are dedicating this morning will provide for an enduring tribute as well as a physical space for meaningful reflection in the future.”

Morehead was one of three individuals who spoke at the ceremony. The Honorable Steve Jones, U.S. District Court Judge for the Northern District of Georgia, and Michelle Cook, UGA’s Vice Provost for Diversity and Inclusion and Strategic University Initiatives, also shared their own reflections.

“As a member of the Baldwin Hall Memorial Advisory Task Force, my fellow members and I spent a great deal of time thinking deeply about this monument,” Jones said. “We recognized the significance of this great project. We took pride in knowing that we had been called upon for this special occasion and this special task. It mattered to us. We wanted to get it right, and I think we did.”

The memorial, located on the south end of the front lawn of Baldwin Hall, near Old Athens Cemetery, will serve as a place of remembrance for the individuals who were originally buried on this site in the 1800s, most of whom likely were slaves or former slaves. 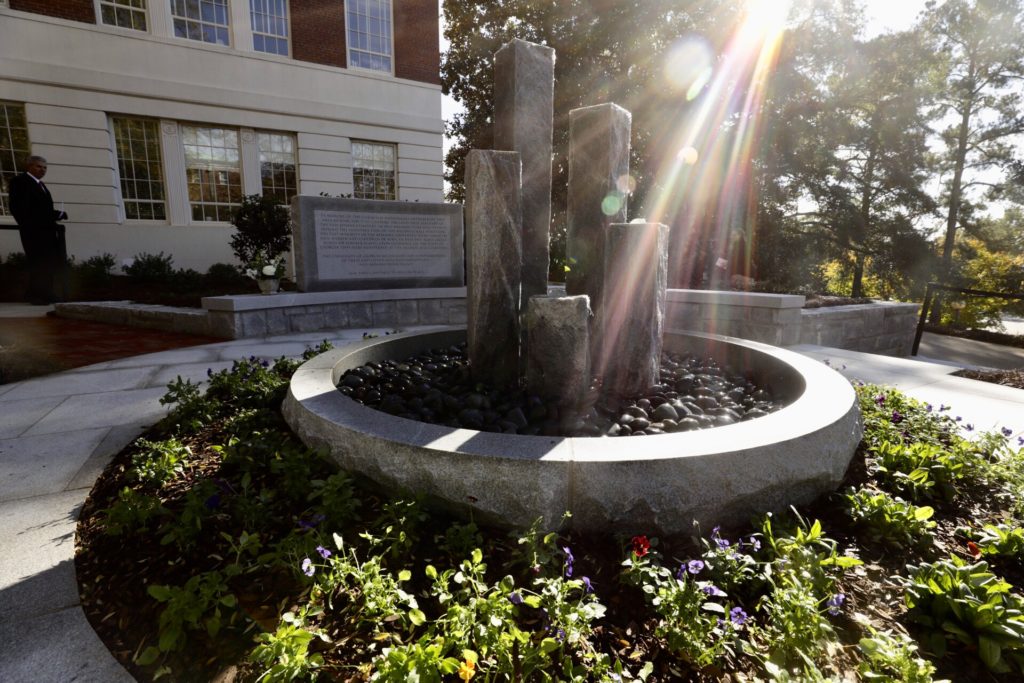 The Baldwin Hall Memorial, dedicated at a ceremony on Friday, Nov. 16, at the University of Georgia in Athens. (Photo by Dorothy Kozlowski/UGA)

The memorial, which complements the aesthetic of the university grounds, includes:

The design was recommended by members of the Baldwin Hall Memorial Advisory Task Force, a group of 18 representatives from the university and the local community appointed by Morehead and chaired by Cook.

“Our goal was to honor, with dignity and respect, the men, women and children who were once buried here,” Cook said. “This memorial is a place of remembrance and reflection. Each element was chosen to evoke a sense of place and permanence. It will be here for generations to come.”

The memorial includes more than 35,000 pounds of granite donated by an Oglethorpe County quarry on land that has been owned by a Georgia African American family for more than a century. Cook is a member of the family that owns the property.

The university also held a memorial service at Oconee Hill Cemetery to commemorate their lives, and a granite marker was placed at the gravesite. Acknowledgment in the form of a plaque also was placed inside the new entrance of the Baldwin Hall addition.