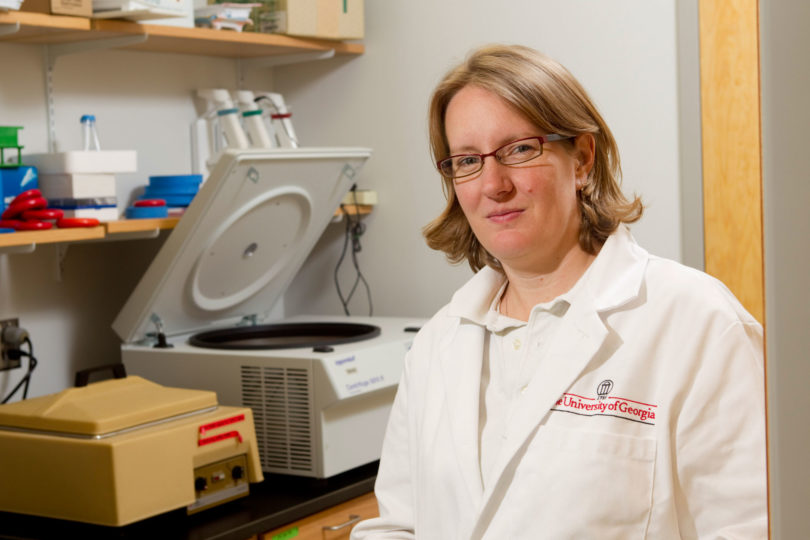 Ask Dr. Kelsey Hart why she wanted to be a large animal clinician, assistant professor and researcher, and you witness her enthusiasm for all the pieces that, once connected, provide a clue.

“I very much love the detective work of internal medicine, especially in something that you can’t ask, ‘What hurts?’ and ‘How do you feel?’ ” said Hart. “I can’t imagine doing anything else.”

One thing Hart enjoys about medicine and science is being alert for all the serendipitous happenings that can lead to something spectacular. Though she admits something inside her always wanted to be James Wright (the veterinarian who wrote All Creatures Great and Small under the pseudonym James Herriot), Hart was not always so sure about being a veterinarian or an internist, and she was steered by others toward the road to academia.

As an undergraduate at Cornell University, Hart thought she’d be an educator like her parents. But after graduation, instead of pursuing graduate programs in special education as she planned, Hart took a job as a research assistant for an entomologist, and contemplated her future. Within months she chose to pursue a career as a veterinarian; within a year of her decision, she was a student at Cornell’s College of Veterinary Medicine.

Hart credits two mentors-both connected to UGA’s College of Veterinary Medicine-with steering her toward Athens. One, Dr. Thomas J. Divers, was a veterinary medicine faculty member at Cornell who also graduated from UGA’s College of Veterinary Medicine in 1975. He set Hart’s future in motion during her first medicine rotation in the spring of her third year.

“About 48 hours into that rotation he said, ‘I think you’re going to be an internist.’ That was the first time I didn’t argue with someone when they said that to me,” Hart said.

A few weeks later, Divers told Hart he had called Dr. Michelle Barton, a professor of large animal internal medicine at UGA who would become Hart’s other mentor, and arranged for Hart to do a two-week externship in the fall of her fourth year. Those two weeks sparked in Hart a desire to return a year later, for an internship, and a year after that, for a residency.

“I started the residency in July 2005. By January, I was beginning a master’s program and working on my first research project (suggested by Barton), and I just fell in love with it,” she said.
Hart’s enthusiasm for her research project led her to expand it and to shift her focus from a master’s degree to the pursuit of a Ph.D. (something Barton predicted she would do, Hart said).

“The project Dr. Barton approached me about was looking at adrenal gland function in sick foals,” said Hart. “The idea was that their infection might affect how their adrenal glands worked. If the adrenal system is not working well, then all other systems don’t work well and the foal cannot fight infection. It’s a vicious cycle, and one that had already been shown in human infants.”

Hart joined the veterinary medicine faculty at UGA after she finished her Ph.D. Dr. Andrew Parks, who heads the college’s department of large animal medicine, said he saw the quality he seeks in new faculty in her.

“Dr. Hart has a passion for clinical work, and a passion for research in the areas that support her clinical interests,” he said. “In our department, I like to see faculty members who can carry their passion from their 30s into their 50s. I know Dr. Hart can do this.”

Hart plans to provide veterinary medicine and graduate students with the same kind of guidance that she had as a student. She serves on a credentials review committee for the American College of Veterinary Internal Medicine; and helps her department recruit interns for the Veterinary Teaching Hospital; and has signed on as co-director of the Georgia Veterinary Scholars Program.

Education, she believes, is a life-long pursuit.

“I do not think I’ll ever be done with my own education,” she said. “There will always be things I want to pursue. What I’ve learned after seven years of practice is how much there still is to learn.”