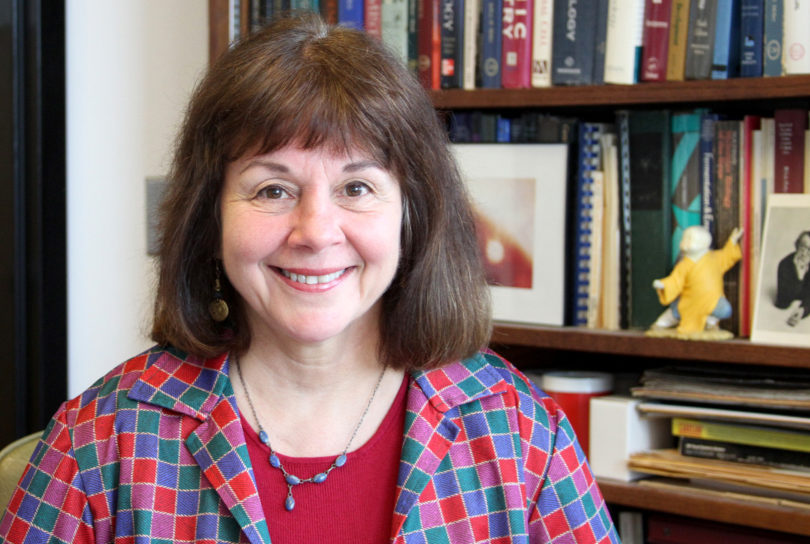 Athens, Ga. – The promise of affordable transportation fuels from biomass—a sustainable, carbon neutral route to American energy independence—has been left perpetually on hold by the economics of the conversion process. New research from the University of Georgia has overcome this hurdle allowing the direct conversion of switchgrass to fuel.

The study, published in the Proceedings of the National Academy of Sciences, documents the direct conversion of biomass to biofuel without pre-treatment, using the engineered bacterium Caldicellulosiruptor bescii.

Pre-treatment of the biomass feedstock—non-food crops such as switchgrass and miscanthus—is the step of breaking down plant cell walls before fermentation into ethanol. This pre-treatment step has long been the economic bottleneck hindering fuel production from lignocellulosic biomass feedstocks.

Janet Westpheling, a professor in the Franklin College of Arts and Sciences department of genetics, and her team of researchers—all members of U.S. Department of Energy-funded BioEnergy Science Center in which UGA is a key partner—succeeded in genetically engineering the organism C. bescii to deconstruct un-pretreated plant biomass.

“Given a choice between teaching an organism how to deconstruct biomass or teaching it how to make ethanol, the more difficult part is deconstructing biomass,” said Westpheling, who spent two and a half years developing genetic methods for manipulating the C. bescii bacterium to make the current work possible.

“Now, without any pretreatment, we can simply take switchgrass, grind it up, add a low-cost, minimal salts medium and get ethanol out the other end,” Westpheling said. “This is the first step toward an industrial process that is economically feasible.”

The recalcitrance of plant biomass for the production of fuels, a resistance to microbial degradation evolved in plants over millions of years, results from their rigid cell walls that have been the key to their survival and the major impediment to biofuel production. Understanding the scientific basis of, and ultimately eliminating recalcitrance as a barrier has been the core mission of the BioEnergy Science Center.

“To take a virtually unknown and uncharacterized organism and engineer it to produce a biofuel of choice within the space of a few years is a towering scientific achievement for Dr. Westpheling’s group and for BESC,” said Paul Gilna, director of the BioEnergy Science Center, headquartered at Oak Ridge National Laboratory. “It is a true reflection of the highly collaborative research we have built within BESC, which, in turn, has led to accelerated accomplishments such as this.”

Caldicellulosiruptor bacteria have been isolated around the world-from a hot spring in Russia to Yellowstone National Park. Westpheling explained that many microbes in nature demonstrate prized capabilities in chemistry and biology but that developing the genetic systems to use them is the most significant challenge.

“Systems biology allows for the engineering of artificial pathways into organisms that allow them to do things they cannot do otherwise,” she said.

Ethanol is but one of the products the bacterium can be taught to produce. Others include butanol and isobutanol (transportation fuels comparable to ethanol), as well as other fuels and chemicals-using biomass as an alternative to petroleum.

“This is really the beginning of a platform for manipulating organisms to make many products that are truly sustainable,” she said.

Westpheling’s co-authors on the paper are Daehwan Chung and Minseok Cha of the Franklin College department of genetics and Adam M. Guss of the Oak Ridge National Laboratory. All authors are members of the DOE BioEnergy Science Center headquartered at Oak Ridge National Laboratory, Oak Ridge, Tennessee. BESC is a U.S. Department of Energy Bioenergy Research Center supported by the DOE Office of Science.