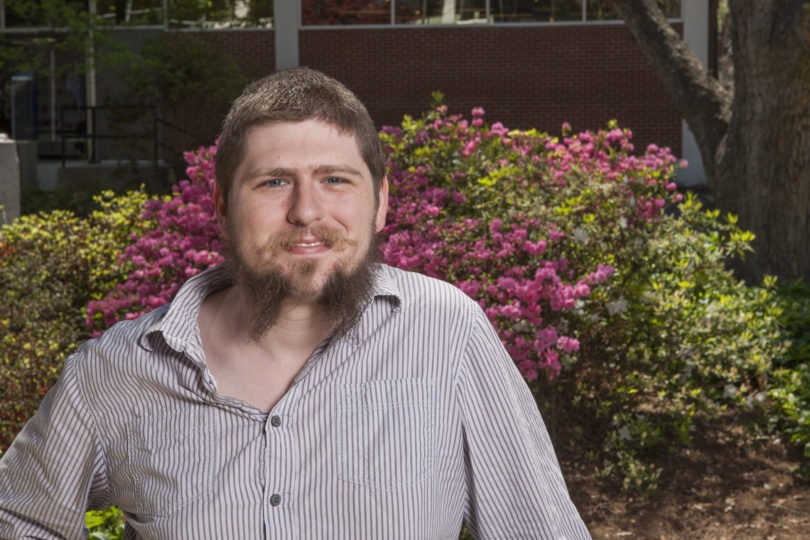 For each graduating student in UGA’s class of 2014, there have been challenges to overcome to earn a degree. For Miles Sandifer, a bachelor of fine arts degree candidate, the journey to graduation has not always been easy.

He describes finishing school a little like wrapping up a war.

In his first year as a transfer student to UGA, he was diagnosed with Asperger’s syndrome, a high-functioning form of autism. The diagnosis helped the Pine Mountain native begin to understand why large lecture courses-in which he felt lost in the shuffle-were proving so difficult for him.

Like many of his classmates, it took a mix of personal hard work and some help from family, faculty and staff to help him become eligible to participate in Commencement May 9.

Miles’ mother, Diane Sandifer, said there are inherent challenges for people on the autism spectrum in large university settings.

During his six years as a UGA undergraduate, Miles struggled to understand course directions from instructors. He does better with written than verbal direction. He also finds it easier to learn in a small classroom environment in which he actively can engage with the instructor.

Fortunately for Miles, he found a major in scientific illustration that was well-suited to his preference for smaller classrooms, allowed him to work on something that fascinated him and showed off some of his strengths.

The science illustration program in the Lamar Dodd School of Art teaches students how to render biological and medical illustrations for educational purposes.

For class assignments, Miles has drawn everything from insects to plants and even human cadavers.

Unlike some other artistic disciplines, Miles said the goal in scientific illustration is to create images that are clear and unambiguous. That means paying close attention to detail.

“You have to put yourself in everyone else’s shoes,” Miles said. “I like the detail-oriented stuff where you never stop asking questions.”

Gene Wright, a professor of art and chair of the scientific illustration program, is Miles’ major professor and has been his academic mentor.

Despite the challenges, Wright said working with Miles has been very rewarding.

Miles has been held to the same academic and artistic standards as his classmates.

Diane Sandifer said of her son, “It was hard to find his niche, but he found it under Gene’s care.”

In fact, Diane Sandifer said it has been individual efforts from faculty and staff to help Miles that have made his graduation possible.

From clerks at the UGA Bookstore to monitors at the parking decks to members of the Educational Affairs Committee, Diane Sandifer said she has encountered people at UGA who cared for Miles and his success at school.

“We kept coming across people who said, ‘I will help you find the answers to help Miles,’ ” she said. “It really touched me.”

In March, Diane Sandifer and Miles’ father, Paul, sent a letter to UGA President Jere W. Morehead to offer their thanks to the faculty and staff who supported Miles, including faculty at the art school and staff at Parking Services and the Disability Resource Center.

Miles said he is grateful to mentors like his figure sculpting instructor, Kinzey Branham.

“He taught me what it means to be an artist,” he said. “He also has extremely high standards, and I flourished in his class.”

Miles said one of his best memories at UGA will be the graduate instructor in one of the first semesters in a drawing class. He approached the instructor to tell her about his Asperger’s syndrome.

Her response struck him as positive and helpful.

“Very quickly into the conversation, she interrupted me and said, ‘Asperger’s, you have the CEO disease,’ ” Miles said. “I never forgot that because she didn’t pity me, she wasn’t walking on egg shells. It was one of my favorite interactions with (an instructor).”