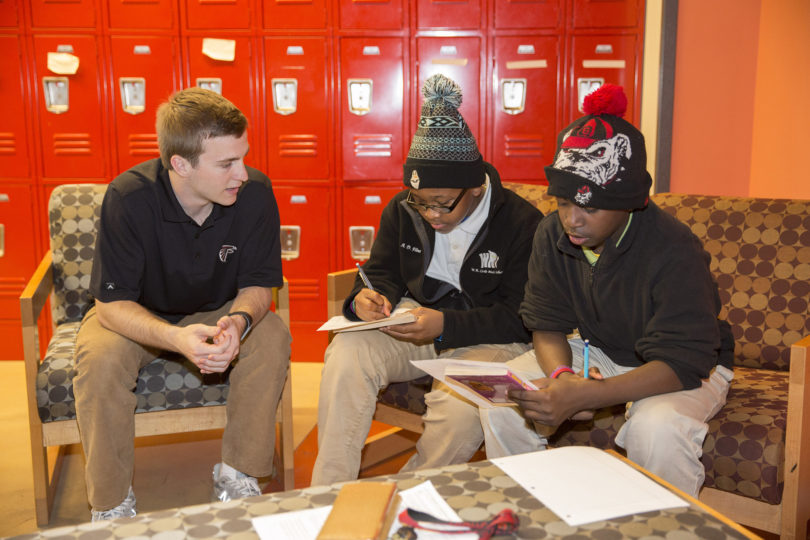 The UGA community as a whole finds a variety of ways to give back, such as the Campaign for Charities, which encourages faculty and staff pledges and donations for local, state and national charitable organizations.

For many students at UGA, their best opportunity to give back to the community is with their time and energy.

That’s certainly true for those working with the Boys and Girls Club of Athens through an educational program called Mind Blowers.

The Boys and Girls Club is one of the charities supported by UGA’s Campaign for Charities. The campaign ends Dec. 15; pledges and donations can made here.

The Mind Blowers program, which was founded and is run by 20 students primarily in the Terry College of Business, offers tutoring to about 25 middle school students at the Boys and Girls Club’s after-school program on Mondays.

The lessons, created and taught by UGA student volunteers, are designed to help the middle schoolers develop math and quantitative skills by solving business-related questions.

Ambreia Curry, a fourth-year finance major from Valdosta, is director of the Mind Blowers program. She said she was drawn to the program because it is an opportunity to empower young students.

“I want to be a part of making a difference,” Curry said. “I want these students to know that they can go to college and succeed just as much as any other student.”

Mind Blowers is hoping to expand its curriculum to other Boys and Girls Club locations over time.

One lesson this semester asked students to design a roller coaster with a given budget and cost of materials. They were asked to consider safety, appearance and surface. The students took to drawing their roller coasters with names like “Scary Adventure Land” and “The Most Scariest Roller Coaster Ever” and adding up costs of their materials.

Derek Coger, a third-year biology major from Austell, said the lesson was designed to get students thinking about budgeting as a life skill. In addition, the questions also challenge students’ reading comprehension and encourage them to be creative.

The program seems to be working.

Randy Groomes, director of diversity relations at the Terry College, has been an adviser to the Mind Blowers program since it was started in 2012 by Terry College graduates Tony Leung and Walter Crawford.

Groomes said math grades for the Boys and Girls Club students, which were historically low, have gone up since the introduction of the program.

The Boys and Girls Club of Athens, which provides a safe, after-school environment for youth, has been a great partner in opening its doors to the Mind Blowers program and allowing UGA students to help make a difference.

“It’s so critical we get support for the Boys and Girls Club, which offers students after-school programs and meals,” Groomes said. “They really take the kids, who might end up dropping out of school, and help them build a bridge to college.”