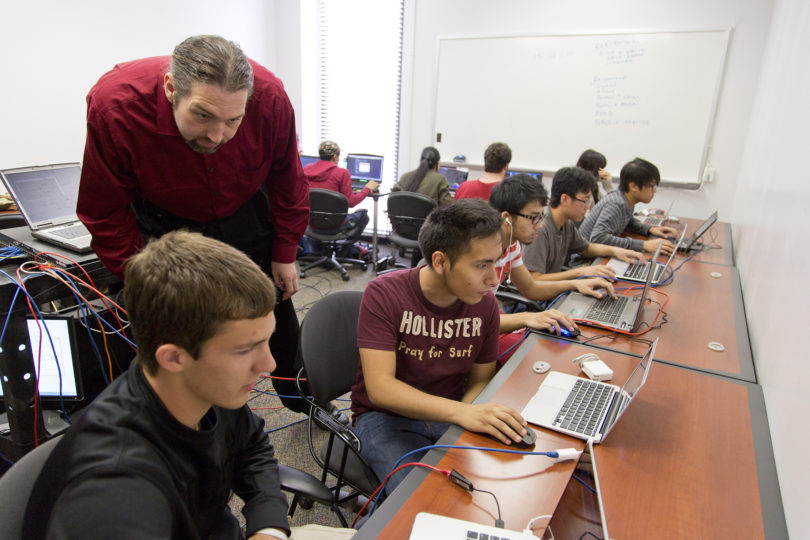 Disaster can strike anywhere, at any time. Floods, tornadoes, hurricanes, earthquakes and other natural disasters can leave behind billions of dollars in damage, along with a reminder of how important it is to be prepared.

Using the zombie video game Minecraft, Erik Hofmeister, an associate professor of veterinary anesthesiology in the College of Veterinary Medicine, gave his students firsthand experience on how to manage themselves in a crisis through “Crisis and Catastrophe Management,” a First-Year Odyssey class he taught this fall.

In this virtual, 3D-generated world, students were placed in an apocalyptic scenario that required them to apply real-life skills. They had to gather wood, rock, clay and other raw materials to build the resources they needed to survive.

“Their goal was to get enough resources and build a place to live that would prepare them for some kind of crisis that I would throw at them,” said Hofmeister, who also is chief of small animal surgery for the college’s Veterinary Teaching Hospital.

As an anesthesiologist, Hofmeister is experienced in making plans with what information he has, all the while trying to be prepared for what could go wrong. He wanted to share this knowledge with students.

Hofmeister had been playing Minecraft himself and was going into his second year of teaching the course when a friend introduced him to the game’s educational potential.

“It’s fun because it’s a creative and open platform,” Hofmeister said. “You can just do whatever you want with it.”

In the game, students must have some form of shelter built before nightfall to protect themselves from zombies and other monsters that hunt mainly at night. While protecting themselves from monsters, students also had to address their hunger and maintain good health. This meant finding first-aid materials and gathering farm
animals for food.

Jessica Wright was frustrated when she started playing the game. She said it was hard to figure out what needed to be done and to get it done in an appropriate amount of time.

“I was talking to my mom, while trying to do it at home, about how it didn’t feel like a game, it was just that you had to survive,” Wright said.

Now that she has become a more skilled player, Wright recognizes how much she learned about preparation, especially for a scenario in which technology would not be available.

“I feel like (the game was) very important for what we learned in the class … (and) it taught you time management,” Wright said.

As part of the class, students read One Second After. The book is a fictional account of how a small town in North Carolina survives a nuclear weapon attack on the U.S. that wipes out every form of technology, from the Internet and electricity to transportation.

Hofmeister said he decided to use the book in his third year of teaching the course because it was a good portrayal of what might happen if all of technology is lost.

“My purpose behind assigning it was to give them insight from the start of a disaster through to its conclusion,” Hofmeister said.

In class discussions, students identified different crisis situations throughout the chapters and devised not only ways that those situations could have been prevented but also ways to deal with what happened. Hofmeister said this exercise helped students execute better plans for their own crisis situations.

Throughout the game, Hofmeister had a bird’s eye view of what each of his 15 students was doing and offered suggestions.

Just when things were cruising along fairly well for each of the class’s three teams, Hofmeister gave them another obstacle-more monsters to fight off, or shelter destruction from a volcanic eruption-to handle. Christopher Tran said he learned the importance of being prepared for many possibilities and adapting to the unexpected.

“The game gave us a good overall, firsthand experience,” Tran said. “Our team thought that we were well-prepared for the scenario that was coming but when it actually happened, a lot of things that we did not expect actually went wrong.”

Hofmeister said in addition to students learning to work collaboratively, he wants them to know they can react in a rational manner when faced with a crisis.

“What I really would hope from this class is that at the end of it the students can feel comfortable knowing what they would need to do to prepare for some kind of disaster,” he said. “And I’ve talked to them about generalizing these skills even to interpersonal conflict management and other scenarios outside of the actual disaster.”