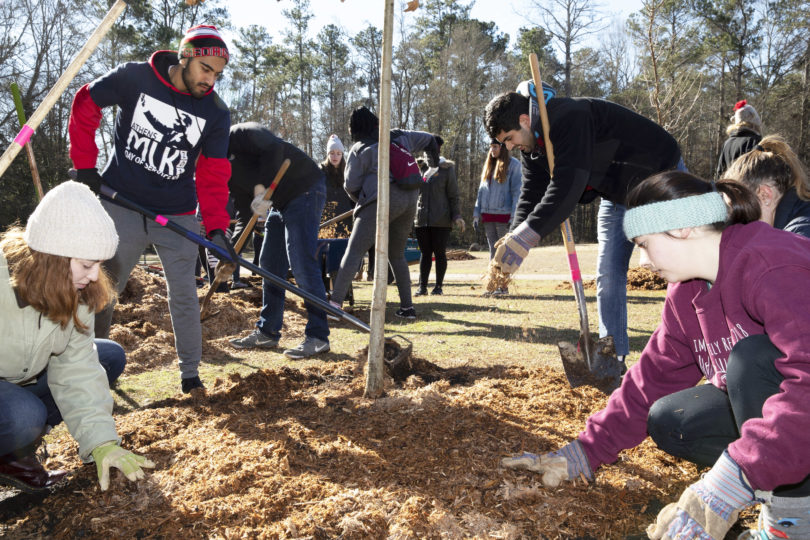 UGA students worked with other volunteers from the Athens-Clarke County community to plant oak trees at Winterville Elementary School on Jan. 21 for the MLK Day of Service. (Photo by Chad Osburn/UGA)

To honor Martin Luther King Jr. Day — the only federal holiday designated a national day of service — nearly 300 University of Georgia students volunteered on Monday across 22 sites in Athens-Clarke County.

Part of the Division of Student Affairs Center for Leadership and Service, ServeUGA students, called service ambassadors, participated in a weekend retreat that concluded with the MLK Day of Service.

“We talked at our retreat this weekend about becoming more of a conscientious and active citizen rather than just being a volunteer,” said Delaney Burke, a first-year international affairs and criminal justice student from Alpharetta. “Rather than us just standing here scooping mulch into a wheelbarrow, why does it matter? Think about the impact that it’s having and the overall issues that are surrounding the school.”

The retreat was an orientation for the new class of service ambassadors.

“One of the big goals of ServeUGA is to get students to think outside the UGA bubble and to get more involved in the community, which is a host to the university,” said Margaret Schrayer, a second-year computer science major from Princeton, New Jersey, who also is on the executive board for ServeUGA.

The Winterville Elementary School site was part of the Making the Shade program created by the Georgia Forestry Commission. The goal of the program is to plant trees to shade playground equipment for kids and to help clean up air pollution.

Seth Hawkins, community forester and certified arborist with the Georgia Forestry Commission, has led 15 of these events. This was his first working with UGA on the MLK Day of Service.

“This is the biggest one I’ve ever done as far as community engagement,” he said. “We really appreciate it, and I’m really excited to see the students out here. I’ve gotten more support for this one than I ever have before.” 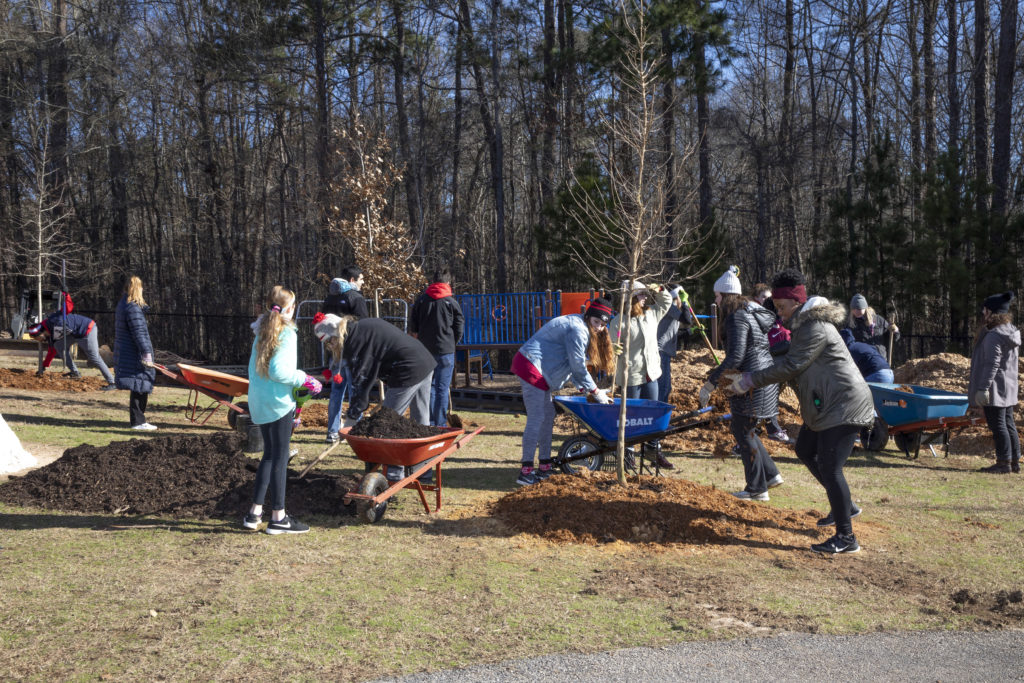 UGA students worked with other volunteers from the Athens-Clarke County community to plant oak trees at Winterville Elementary School on Jan. 21 for the MLK Day of Service. (Photo by Chad Osburn/UGA)

Besides creating shade for the playground, the trees planted will also become a part of the elementary students’ education. The students will help take care of the trees and will be able to learn more about them.

UGA students worked with others across the community, including Caterpillar employees and PTO participants, to help plant the trees.

“It’s nice for them to get to interact with actual community members as opposed to just hang out with each other all day,” said Josh Podvin, the senior coordinator for community partnerships at UGA’s Office of Service-Learning and part of the planning committee for the MLK Day of Service.

The MLK Day of Service is just one of the volunteering opportunities in which ServeUGA, which has more than 40 member organizations, participates.

“It’s a great way for college students to get involved with the local community, especially now that we are members of the local community,” said Tommy Bui, a third-year psychology and biology major from Johns Creek. “It’s good to get out there and learn about what’s going on in the community and the problems that are facing it.”

Katy Miles, ServeUGA’s director of outreach, also believes in the importance of serving.

“There are a lot of social issues in Athens, and it’s our responsibility to serve and work with the community, so we can learn more about the community that we are making our home for four years,” said Miles, who is a third-year marketing major from Loganville.

The city of Winterville has a population of fewer than 2,000. Mayor Dodd Ferrelle said UGA’s service is greatly appreciated.

“It’s incredible. It’s awesome to be a little city connected to Athens and the university to get all this help on this great day of service,” Ferrelle said. “We could not do this without the MLK Day of Service folks, so it’s fantastic.”