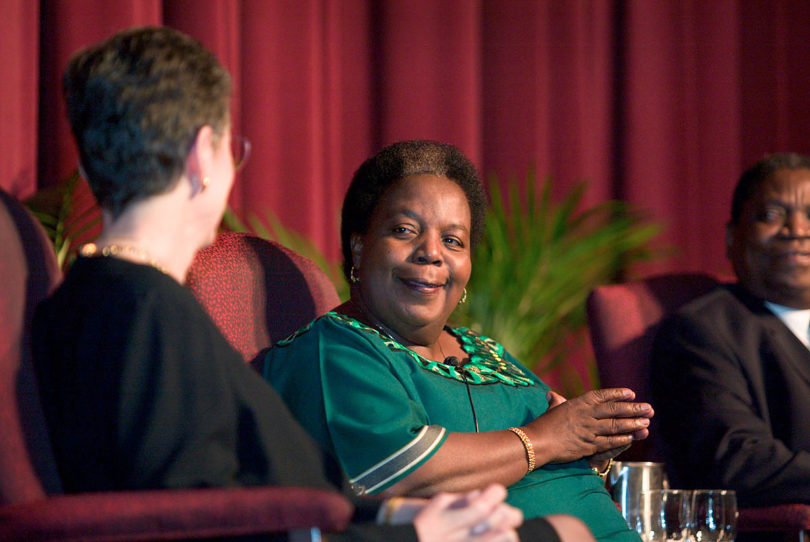 Gertrude Ibengwe Mongella, the first president of the Pan-African Parliament, will receive the 2005 Delta Prize for Global Understanding at a banquet on March 1 on campus. Mongella will be recognized for her lifelong championship of women’s and children’s rights.

A symposium on Mongella’s contributions to global understanding will take place the same day at 4 p.m. in Masters Hall of the Georgia Center for Continuing Education. The symposium will feature a panel discussion with Mongella; Andrew M. Daraja, Tanzanian ambassador to the United States; and Lioba Moshi, director of the African Studies Institute at UGA. Betty Jean Craige, director of the Center for Humanities and Arts, will moderate. The symposium is free and open to the public.

While she is on campus, Mongella will also deliver the 13th annual Darl Snyder Lecture for the African Studies Institute. She will speak at 10 a.m. March 2 in the Chapel on the role of the African Union in resolving the Darfur and lake-region crisis. The lecture is also free and open to the public.

Mongella has previously served as a member of parliament in Tanzania, as Goodwill Ambassador to the World Health Organization representing Africa, as leader of the Organization of African Unity’s election observer team for the 2002 Zimbabwe presidential election, as a member of the Council of “The Future” at UNESCO, as president of Advocacy for Women in Africa, and as U.N. assistant secretary general, and as secretary general for the fourth World Conference on Women in Beijing.

Established with an $890,000 endowment grant from the Delta Air Lines Foundation, the Delta Prize for Global Understanding is administered by UGA. The prize includes a bronze sculpture and a $10,000 cash award. Previous recipients include Václav Havel, former president of the Czech Republic; Sadako Ogata, former United Nations High Commissioner for Refugees; Mikhail Gorbachev, former president of the Soviet Union; Archbishop Desmond Tutu of South Africa; and former president and Mrs. Jimmy Carter and the Carter Center.