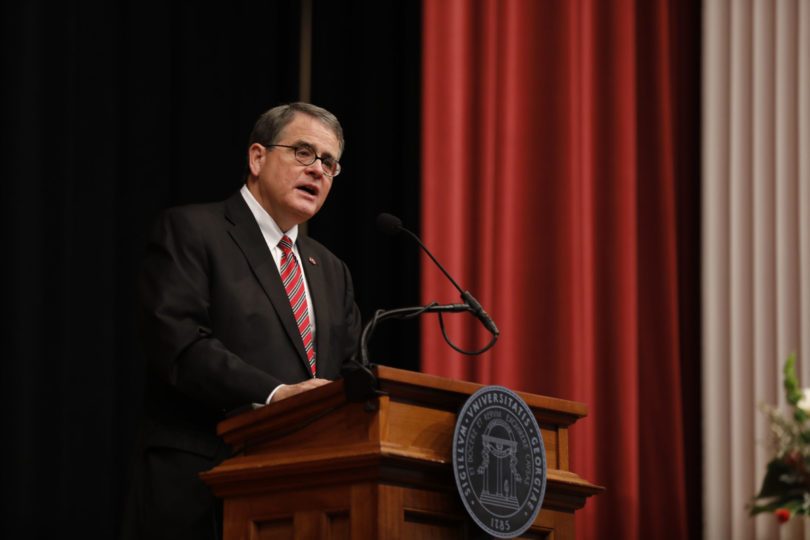 UGA President Jere W. Morehead delivers the 2020 State of the University address in the Chapel. (Photo by Andrew Davis Tucker/UGA)

University of Georgia President Jere W. Morehead delivered the annual State of the University address Wednesday, highlighting major achievements from the past year and discussing a new strategic plan to guide the University through 2025.

“The time is right for us to embrace our new goals and our new aspirations, to celebrate how far we’ve come and then imagine how much farther we can go,” Morehead said.

The president underscored that UGA once again enrolled an exceptional class of first-year students selected from the largest pool of applicants to date, 82 percent of whom are Georgia residents. He also noted that completion rates increased again, with 87 percent of students finishing their degrees in six years, and 69 percent in four, numbers well above UGA’s peer institutions.

“Clearly, we’ve built a vibrant, world-class learning environment,” said Morehead. “We are attracting the very best students from across the state and nation, and around the world, and they are flourishing here.”

“Make no mistake: these are big, big gains in productivity,” said Morehead.

Morehead also highlighted progress related to the university’s Innovation District initiative, including the opening of Studio 225 as the Student Center for Entrepreneurship and the launch of new programs to encourage and support research commercialization and entrepreneurship.

Morehead announced a $3.5 million gift from the Delta Air Lines Foundation to renovate the Spring Street Building, part of a $5 million pledge from Delta that will also support the student success center in the College of Engineering. The Spring Street Building will open in January 2021 as the second capital project of the Innovation District and will provide space for project-based learning, startup companies, and industry collaboration.

“This gift will transform the Spring Street Building into an energetic hub of creativity, collaboration, and entrepreneurship,” he said.

UGA’s annual economic impact on Georgia is now estimated at $6.5 billion, Morehead noted, with programs reaching every city and county in the state. 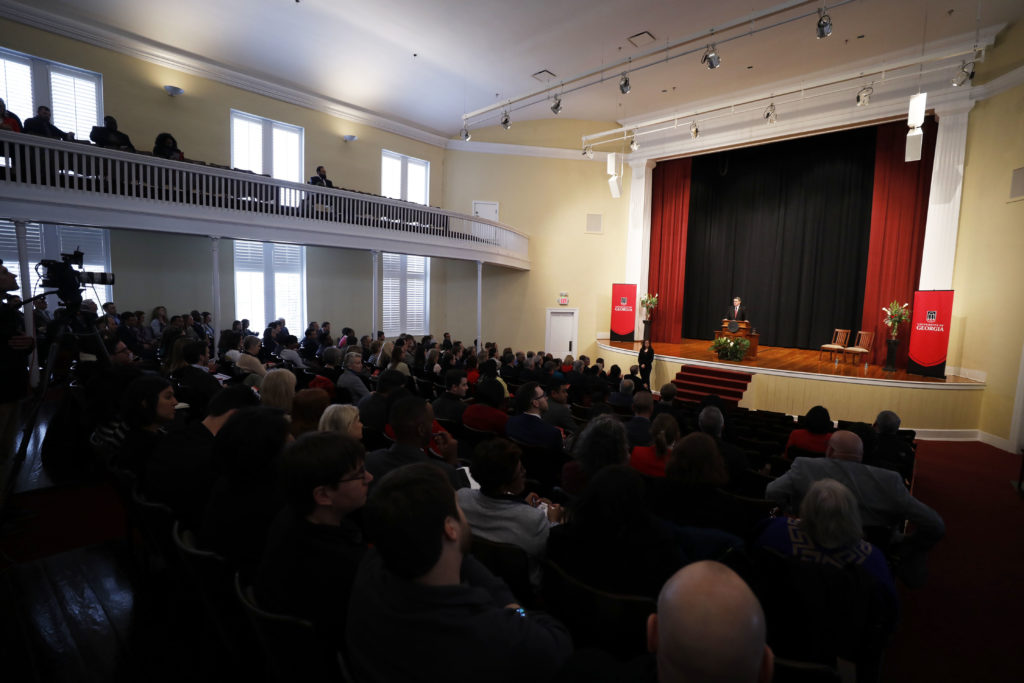 UGA President Jere W. Morehead delivers the 2020 State of the University address in the Chapel. (Photo by Andrew Davis Tucker/UGA)

“I like to think of our service mission as a set of concentric circles, originating here in Athens, reaching across every county in Georgia, and spanning our nation and our world,” Morehead said. “Over the next five years, I believe we can do even more, be even more, for the citizens of this state and beyond.”

Morehead praised alumni and friends for their contributions to the Commit to Georgia Campaign.  He noted that the university had already surpassed its ambitious $1.2 billion fundraising goal with time remaining before the campaign ends on June 30, 2020.

He also applauded donors for creating over 500 endowed scholarships totaling commitments of more than $77 million to create permanent pathways to higher education for Georgia residents from low-income backgrounds.

“I want to take a moment to publicly thank each and every person who has contributed to the Commit to Georgia campaign,” said Morehead.  “Know that your support is making an enormous impact.  It is changing lives.”

Morehead also discussed the university’s new five-year strategic plan, including three overarching priorities:  promoting excellence in teaching and learning; growing research, innovation, and entrepreneurship; and strengthening partnerships with communities across Georgia and beyond.

“Each of these areas is critical to our future growth and success,” Morehead stated.  “Each is a declaration of priority and aspiration, and taken together, with their corresponding goals, they set a course to build on our great momentum.”

The speech concluded with Morehead praising the strength of the UGA community.

To watch a video of the speech or to read the full address visit https://president.uga.edu/sotu/.