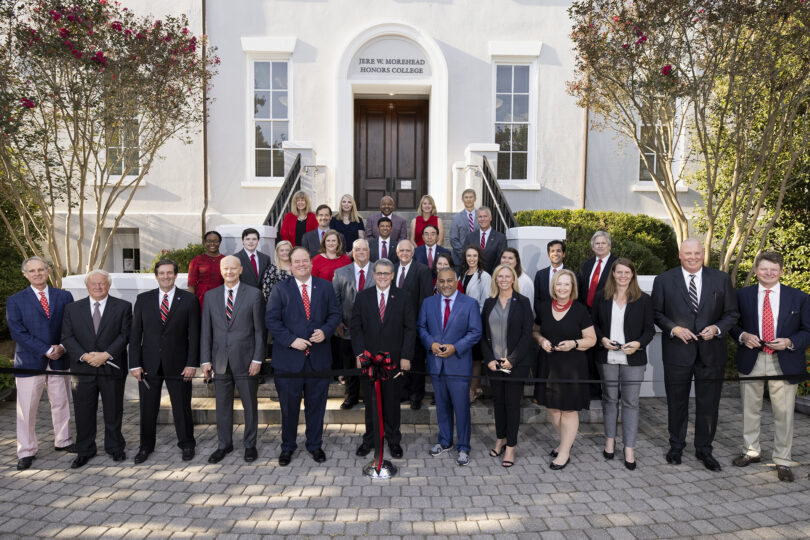 The dedication of the University of Georgia’s Jere W. Morehead Honors College was celebrated on Thursday, Sept. 30, with a ribbon-cutting on the steps of Moore Hall, facing Herty Field. The event was attended by current and emeriti trustees of the UGA Foundation, as well as the acting chancellor, former chancellor and several members of the University System of Georgia Board of Regents.

The naming was approved by the University System of Georgia Board of Regents on May 11, the result of a successful fundraising campaign by former and current trustees of the University of Georgia Foundation. To date, that campaign has raised more than $11 million.

“It has been a true pleasure to see how undergraduate research, internships, travel-study, and service-learning have continued to evolve and expand at UGA through Honors—and to see how much our amazing students have benefitted from these experiences,” said Morehead. “That is why I am especially pleased that the funds raised to support the naming of the Honors College will help ensure that our best and brightest continue to receive the support they need to achieve their dreams.”

Morehead served as director of the UGA Honors Program from 1999-2004. During his tenure, UGA Honors students earned 23 significant scholarships, including two Rhodes, three Marshall, three Truman and 15 Goldwater scholars. He also oversaw the creation of the Washington Semester Program, which has enabled more than 2,000 students to work as interns in the nation’s capital.

Chloe Kelley, a former Foundation Fellow who is now senior vice president for account management at PIMCO in New York, recalled a pivotal meeting she had with Morehead after her first semester of study.  “I felt seen, I felt supported, and I felt encouraged.  I thought if he believed I could succeed at UGA, then I should believe it, too.”

Morehead’s UGA career began in 1986 when he joined the Terry College of Business as an assistant professor and served as advisor to the School of Law’s celebrated moot court program. Before being named UGA’s 22nd president in 2013, he served as senior vice president for academic affairs and provost for three years. Earlier, he held several key administrative posts, including vice president for instruction, vice provost for academic affairs, associate provost and director of the UGA Honors Program, and acting executive director of legal affairs.

He has received several University-wide teaching honors, including the Josiah Meigs Award—UGA’s highest honor for teaching excellence. Morehead continues to teach to this day, including a First-Year Odyssey seminar on legal issues.

“A great lesson I learned from you was that we can and should be courageous enough to expect more of each other,” said Deep Shah, a former Foundation Fellow, Rhodes Scholar and Truman Scholar who now serves as vice president of the Gwinnett Clinic, where he practices medicine. Shah noted that Morehead had been a mentor to him since his senior year of high school.  “Make no mistake—it is the personal time and attention that you have given over the decades that has elevated our community.”

In response, Morehead noted that he was inspired every day by the accomplishments of Honors students and alumni like Kelley and Shah: “Knowing that my name will be associated with the education of our Honors students makes me more proud than I could ever express.