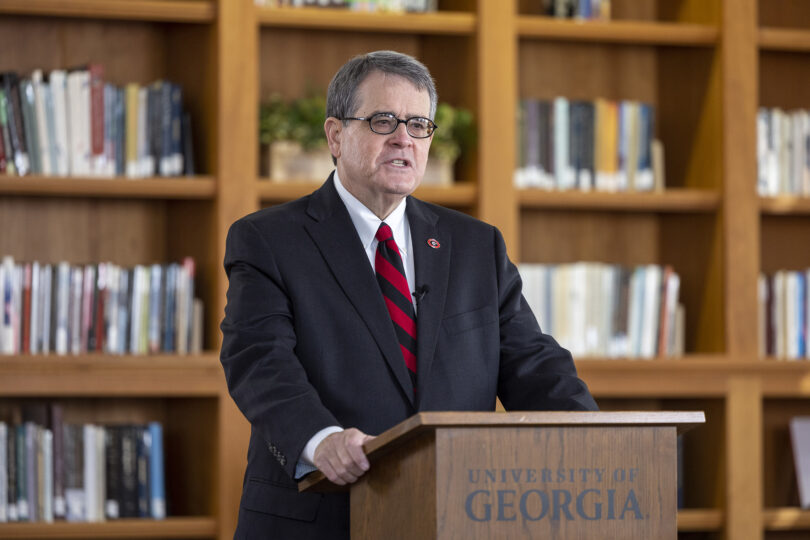 President Morehead delivers the 2022 State of the University Address. (Photo by Peter Frey/UGA)

University of Georgia President Jere W. Morehead delivered the annual State of the University address Wednesday, expressing gratitude to the entire university community for their service during a challenging but successful year.

“When I look back on the past 12 months—a year with no shortage of obstacles—a clear and compelling story emerges: a story of a community bound by a deep sense of purpose, driven by an unyielding commitment to a shared mission,” Morehead said. “This commitment led us to confront the worst of the pandemic, summoning the best of who we are in pursuit of a noble calling. And it propelled our university to exceptional achievements—achievements that reveal a community powerfully shaping a better tomorrow for our state, nation and world.”

Morehead detailed some of the institution’s accomplishments, while also unveiling a series of new initiatives that he said promise to make the university even stronger.

A year of achievements

In 2021, UGA students’ four- and six-year completion rates climbed to record highs, and the retention rate, which measures the percentage of first-year students returning for a second year, rose to 95%. Fall enrollment reached an all-time high of more than 40,000 students, and the largest applicant pool in UGA history sought admission to the first-year class. U.S. News &World Report ranked the University of Georgia No. 16 among the best public universities, marking UGA’s sixth consecutive year in the top 20.

In November the university officially opened the first Interdisciplinary STEM Research Building and broke ground on a Poultry Science Complex.

“I want to offer my sincere thanks to the Governor, the General Assembly, and the University System of Georgia’s Acting Chancellor and Board of Regents for their strong support of these projects,” Morehead said. “We also are grateful to the Governor and Board of Regents for including the next phases of the Science Hill modernization project in their FY 2023 budgets submitted to the General Assembly.”

The university’s economic impact on Georgia climbed to a record $7.4 billion in 2021, and UGA ranked second nationally for the number of products introduced to the market. Morehead also noted that the establishment of the Delta Innovation Hub, the newest facility in UGA’s Innovation District made possible by support from The Delta Air Lines Foundation, will provide additional support for the university’s growing startup program.

Citing the importance of the university’s land-grant mission, Morehead applauded UGA’s Public Service and Outreach units for their work with entrepreneurs and communities across the state. The Small Business Development Center helped launch nearly 500 new businesses over the past year, and the Carl Vinson Institute of Government was recognized nationally for its efforts to expand broadband internet access.

“Yet, of all our accomplishments in 2021, I am most gratified by how we came together to enrich and elevate our community,” Morehead said. “Throughout the year, we commemorated the 60th anniversary of the University of Georgia’s integration while continuing to strive for a more inclusive and welcoming learning environment.”

The university initiated 16 measures recommended by the Presidential Task Force on Race, Ethnicity, and Community and adopted a university-wide plan developed by the Planning Committee on Diversity and Inclusive Excellence, which will advance UGA’s diversity and inclusion efforts over the next five years, Morehead said.

An eye to the future

Morehead announced several new initiatives during his address, which he said will ensure a brighter tomorrow for the university.

He announced a five-year, $6 million initiative to expand active learning at UGA. Building on existing plans to transform classrooms into dynamic, active learning spaces and the success of UGA’s Active Learning Summer Institute, the funds will provide faculty with more resources to implement active learning and new support mechanisms for students that will allow them to engage in active learning across their studies.

Morehead also announced that UGA will renew the ALL Georgia program for an additional six years. Launched in 2018, the program provides financial and academic support, mentorship and leadership opportunities to undergraduate students from rural areas. The university will also launch a fundraising initiative in the spring to generate more endowed scholarships for graduate students as well as a new seminar program called GradFIRST, which will provide graduate students with expanded opportunities for training and professional development.

Because demand for mental health services has grown substantially during the pandemic, Morehead announced that he would dedicate $1 million in private funds to expand well-being support across campus.

Morehead also announced the formal launch of UGA’s Connected Resilient Communities program, through which university experts will work hand in hand with local communities to identify potential challenges and discover opportunities for growth. The program, led by the Archway Partnership, was piloted in McDuffie County, Georgia.

In closing, Morehead again thanked the university community for their dedication and service during times of great difficulty.

“In the year ahead, we will encounter further headwinds. Our fight against COVID will continue,” he said. “But as we confront the obstacles to come, let us remember our noble mission and recommit ourselves to the core principles of this great university: learning, discovery and service; inclusion, integrity and diversity of thought. And as we work together, let us be inspired anew by our university’s greatest ambition: to enrich lives, lift up communities, and address society’s grand challenges.”