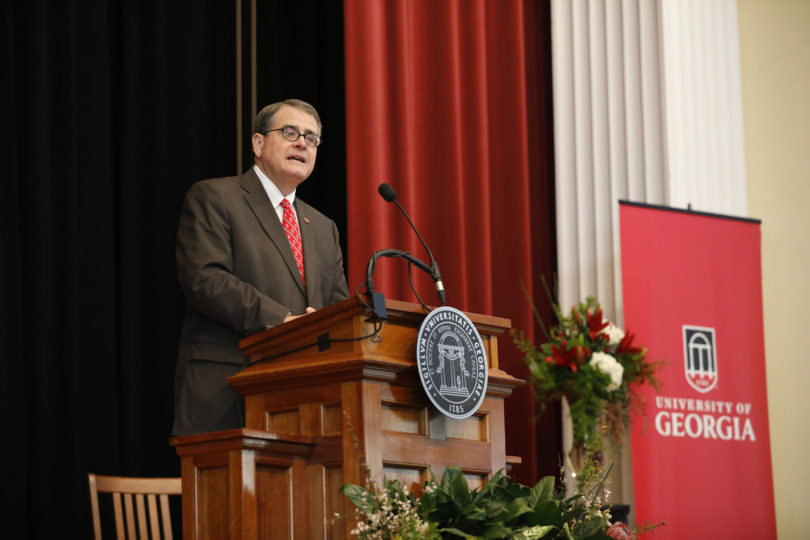 UGA President Jere W. Morehead delivers the 2019 State of the University address Jan. 30 in the Chapel. (Photo by Peter Frey/UGA)

University of Georgia President Jere W. Morehead delivered his annual State of the University address Wednesday, highlighting record accomplishments from the past five years and unveiling a series of initiatives to elevate UGA to new heights of excellence.

“If the last five years have shown us anything, it’s that when we commit—when we unite around a common purpose—there is no goal, no aspiration, beyond our reach,” Morehead said.

Some of the measures that have made this success possible include hiring efforts to reduce class sizes and strengthen academic advising and a pioneering experiential learning requirement to give students more opportunities to connect coursework to the world beyond the classroom.

Morehead also praised the deep partnership between the university and its home state, pointing to a new estimate of the institution’s annual statewide economic impact, now valued at $6.3 billion.

“That’s a big impact on individuals, families, and communities,” Morehead said. “With a tradition of service dating back more than two centuries, society should expect no less from the University of Georgia.”

A strategic planning process also was announced during the speech.  The new plan will guide the university from 2020, when the current plan expires, to 2025.

A university-wide committee will develop the plan over the course of the next year, and the plan will include goals focused on three mission-centered strategic directions: promoting excellence in teaching and learning; growing research, innovation and entrepreneurship; and strengthening partnerships with communities in Georgia and around the world.

The university’s growing research enterprise also was a theme of the speech.  Research expenditures at the university are up nearly 30 percent over the past five years, and the institution recently earned the No. 1 ranking among American universities for driving new products to the marketplace.

“Our innovation ecosystem is booming. A movement is already underway. This is our moment to accelerate, and we must seize it,” said Morehead.

Plans are now underway to establish an innovation district at the interface of North Campus and downtown Athens.  The district will include a range of facilities and spaces and feature a startup incubator for faculty and alumni; offices for industry partners who want deeper collaboration with faculty and students; and space for entrepreneurship training, coworking and “big-sky thinking.”

Morehead announced a multipronged initiative to further energize the campus around innovation, including a semester-long innovation fellows program to help faculty commercialize their ideas and inventions and a new extended orientation program to introduce incoming students to the university’s culture of innovation and entrepreneurship.

Finally, he announced the continuation of two grant programs, one to promote interdisciplinary research partnerships around grand challenges and the other to enhance the academic experience of underrepresented, first-generation, rural, and other underserved students.

“Working together, we are transforming the learning environment. We are changing the lives of our students,” said Morehead, “and we are proving that the future of public higher education in America is being molded right here, where it began, at the University of Georgia.”