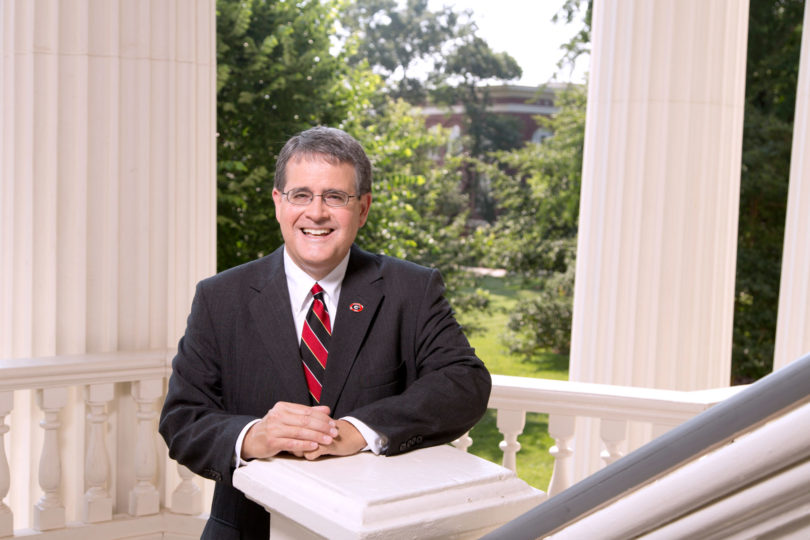 As Jere W. Morehead officially steps into the role of president of UGA today, he does so with support from high-ranking state leaders and a challenge: to make an institution already recognized as one of the best public universities in the country even better.

Attracting and retaining top faculty and students from around the world, focusing on the core missions of the university—teaching, research and service—and diversifying the faculty and student body are high priorities, all of which will require additional funding.

“The most important thing I can accomplish as president is to substantially grow the endowment of the university,” Morehead said in the weeks leading up to July 1.

In those weeks, Morehead has focused on streamlining the administration and meeting with students, faculty, state leaders and members of other institutions as he lays out his plan for UGA, which will include launching a capital campaign to raise $1 billion or more, depending on further analysis.

With just a few exceptions, he said, the heart of that campaign will be growing the endowment to support academic programs, faculty chairs and student scholarships.

“You’re likely to hear me talk about those to alumni, about supporting our academic programs to make student support stronger than it is today,” he said.

An insider, Morehead earned his Juris Doctor from the UGA School of Law in 1980 and has worked at the university since 1986, serving as a professor in the Terry College of Business, director of the Law School Advocacy Program, acting executive director of legal affairs, director of the Honors Program, vice provost for academic affairs, vice president for instruction and most recently provost and senior vice president for academic affairs.

His understanding of the university and his engagement with students over the years-many who have stayed in touch with him for decades-were points in his favor when he was a candidate for the presidency.

University System of Georgia Chancellor Hank Huckaby, former senior vice president for finance and administration at UGA, worked closely with Morehead while both were at the university.

Morehead “is the right decision for UGA,” Huckaby said as the board of regents confirmed its selection in February. “I have known and worked with Jere for many years and am delighted he will have this great opportunity to serve the university he loves so well. Our students will be in excellent hands under his leadership. Jere will bring the vision and energy essential to UGA advancing its land grant mission.”

“There are times when an organization needs to bring in an outsider to shake things up, but that’s not the case at UGA,” Deal said in a February statement about Morehead’s selection. “The university has made tremendous strides under President Michael Adams over these last 16 years, and I think Jere’s vision for the school will take it to the next level.”

Direct reports to Morehead will include a single senior vice president, for academic affairs and provost; four vice presidents; the director of athletics; an executive director of legal affairs; an internal auditor; an Equal Opportunity Office director; the faculty athletic representative and a chief of staff.The remaining five vice presidents will report directly to the provost and then to Morehead. In addition, Morehead is chair of the UGA Research Foundation and the UGA Athletic Association and serves on the board of trustees for the UGA Foundation and the UGA Real Estate Foundation.

Deans will continue to report to the senior vice president for academic affairs and provost, but will have regular group meetings with the president.

Morehead has reduced his executive staff, led by Chief of Staff Kathy Pharr, to three from four employees, transferring one of the assistant positions to the development office to work on the upcoming capital campaign.

“Every president has his own style. This organizational structure is more comfortable to me,” he said.

Morehead is quick to note that he has no plans to cut people or programs, but will look more critically at how the university is spending its money.

“When someone brings forth a proposal or idea they are going to need to show how that proposal is going to enhance the academic stature of the university,” he said.

“I want to make sure our institution stays focused on its primary mission: to educate students, conduct research and serve the public,” Morehead also said. “And I think it will be important to do everything possible to generate resources and shift other resources to support these three key functions.”

The UGA Alumni Association will host a welcome reception for Jere W. Morehead, UGA’s 22nd president, July 9 at 10:30 a.m. at the Abraham Baldwin statute in front of Old College. Refreshments and tours of the Administration Building and the Gordon Jones Gallery will be provided. Parking will be available in the North Campus deck.