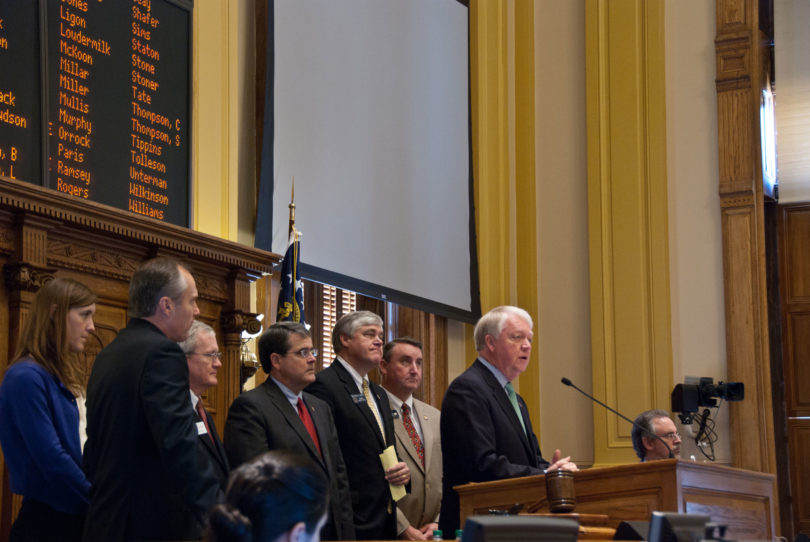 On July 2, 1862, beneath the unfinished U.S. Capitol Dome and with the Seven Days Battles raging just miles away in Richmond, Va., the 37th Congress passed into legislation the Morrill Land Grant Colleges Act. The act donated 30,000 acres of public lands to each state for each senator or representative the state had in congress. The land was to be used for the creation of “at least one college in every state upon a sure and perpetual foundation, accessible to all, but especially to the sons of toil. . . .”

UGA’s service mission is the tangible expression of the grand idea that the Morrill Act, codified in 1862, and the Georgia General Assembly articulated in 1784, when it endowed UGA as the nation’s first state-chartered university.

“The charter establishing the University of Georgia and the signing of the Morrill Act posited the radical position that higher education was a public good, not a private privilege, and that institutions of higher learning were to connect their expertise with the needs of the people,” said UGA President Michael F. Adams in remarks to the Georgia General Assembly on March 14, during the passage of a resolution recognizing the significance of the Morrill Act and commemorating its passage.

“There was a recognition in the 1870s at UGA and other land-grant institutions that people needed access to the work that was being done on campuses. That was the genesis of what later became known as the extension service,” said Scott Angle, dean of the College of Agricultural and Environmental Sciences. “We have always done this in the areas of agriculture, family and consumer sciences, forestry and veterinary medicine. Now, we are seeing other colleges at UGA reaching out to all the citizens of Georgia.”

Jennifer Frum, vice president for public service and outreach, believes that the key to continuing to serve Georgia effectively is to work across boundaries with instruction and research to engage faculty in helping Georgia not only address challenges, but flourish.

Eight PSO units have responsibilities for public service, whether enhancing the ability of governments to better serve their constituents, working to improve marine industries, creating and expanding service-learning opportunities for students, supporting efforts to create and sustain Georgia’s businesses and communities, or disseminating botanical knowledge.

“I believe that PSO has an important place in developing students who graduate better prepared to engage with their communities, the state of Georgia and the world,” Frum said.

The Public Service and Outreach Student Scholars Program was developed to provide students with a deeper understanding of the university’s service mission through experiences with PSO and community partners. The program also helps students link their service experiences with their career and educational goals.

Laura Meadows, director of the Carl Vinson Institute of Government,  knows first-hand the value of a land-grant university to Georgians. Meadows grew up in a farming family, and remembers extension agents helping her father and grandfather make a living to feed their large family. She also attended UGA, and learned the impact of the university’s service mission on students. It led her to a career in public service and a passion for UGA’s mission.

“The land-grant mission is really all about taking the resources of the university out to the people,” Meadows said.