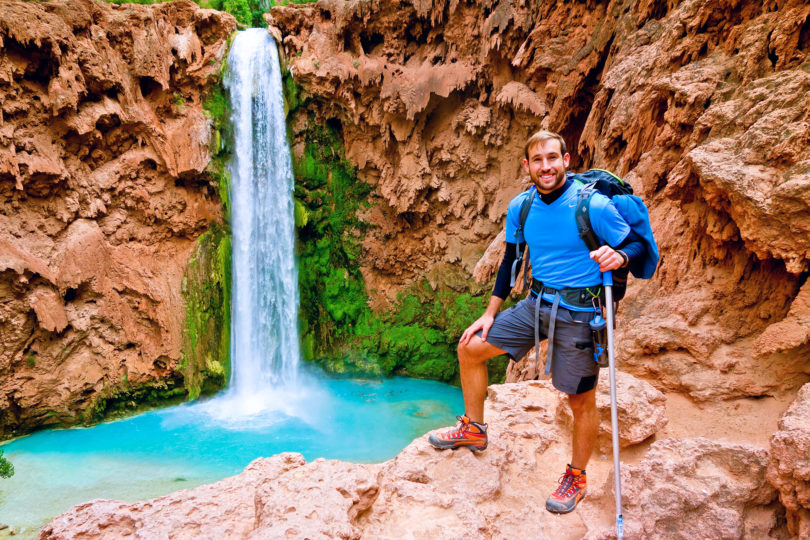 Marshall Mosher stops for a photo next to a waterfall while exploring the Havasupai Indian Reservation near Grand Canyon National Park.

Athens, Ga. – University of Georgia master’s student Marshall Mosher is no stranger to adventure. An avid kayaker, climber, scuba diver, snowboarder and mountain biker, he has traveled the world. Now, he wants to share that passion with others.

Mosher is the co-founder of Vestigo, an online service that connects people who are curious about the outdoors with experienced enthusiasts who can show them the way. His business idea recently won him a $30,000 scholarship to an intensive 10-week graduate studies program at Singularity University, a Silicon Valley ideas incubator that seeks to solve the world’s most pressing challenges using advanced technologies.

Mosher believes that Vestigo, which means to follow or explore in Latin, will improve the mental and physical health of its customers by instilling a passion for outdoor activities that are both physically demanding and intellectually stimulating. He left Athens recently to begin his work at Singularity University, where he hopes he can perfect the business model for his company.

“UGA has an incredible network of Singularity University alumni whose experiences have led to the creation of companies, patents and projects that will further the impact of UGA and Athens on the world,” Mosher said. “Through the SU experience, I hope to build upon my Master of Public Administration in health policy and administration to encourage a healthier and more active lifestyle through the outdoor fitness and adventure sharing network of Vestigo.”

Mosher is one of 80 students from around the world who will work with other researchers, entrepreneurs and inventors in Singularity University’s program held at the NASA Ames Research Center in Silicon Valley, California.

“Improving health through fitness is a growing need,” said Kausar Samli, a recent doctoral graduate and former Singularity University participant from UGA. “An all-in-one solution to help novices and experts peruse outdoor experiences is much needed, and Marshall already has exceptional leadership experience and a demonstrated entrepreneurial drive focused on public health.”

UGA is one of only two U.S. universities to hold competitions for the Singularity University program. Mosher is the fourth UGA graduate student to attend.

“The most exciting factor about the Singularity University experience is the deep personal connection that the SU program forms among participants and faculty,” Mosher said. “These are incredible innovators, visionaries and leaders in the fields…people I’d be lucky to see at a TED talk or a keynote speech.

“But rather than observing their work from a distance, I’ll have the chance to personally collaborate.”