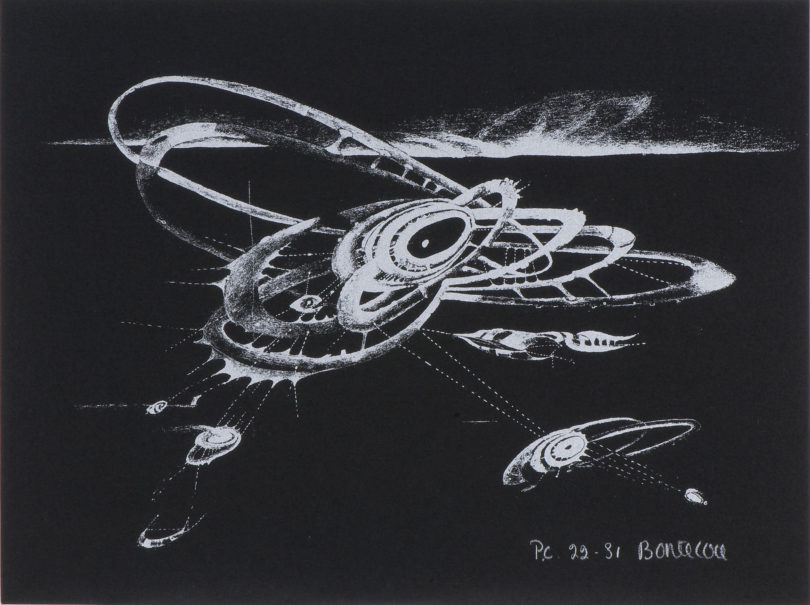 The Georgia Museum of Art will present an evening of films in conjunction with the exhibition The New York Collection for Stockholm Sept. 20 at 7 p.m.  Free and open to the public, the films will be shown in the M. Smith Griffith Auditorium.

The three films feature archival material from a series of innovative dance, music and theater performances, known as 9 Evenings: Theatre and Engineering, held in 1966 at the 69th Regiment Armory, New York City. Immediately following the event, the organizers formed the group Experiments in Art and Technology to continue facilitating artist-engineer collaborations.

From 1971 to 1973, E.A.T. put together the New York Collection for Stockholm and produced its fundraising portfolio of the same name, which is on view at the museum through Oct. 28.

Archival material from three of the 9 Evenings performances was assembled into three films, each of which reconstructs the artist’s original work and uses interviews with the artists, engineers and performers in documentaries that illuminate the artistic, technical and historical aspects of the work.

John Cage’s Variations VII uses beams of light that triggered live sounds from all over New York City, some transmitted via telephone, creating a new version of the work each time.

Bandoneon! (a combine), the third film, presents Tudor’s first full concert work as a composer. Tudor outfitted a bandoneon, a South American instrument related to an accordion, with microphones that transformed the audio input into new sounds, video images and lights, creating a work that animated the entire Armory space.

Lynn Boland, Pierre Daura Curator of European Art and curator of the Stockholm exhibition, will introduce the films with a 30-minute discussion outlining the story behind 9 Evenings and E.A.T. He also will highlight some of the prints in the exhibition. The three films total 113 minutes and are not rated.