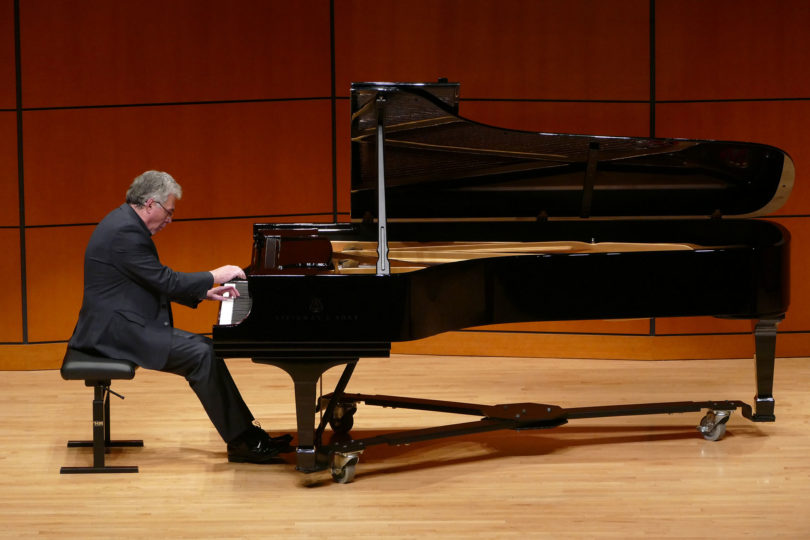 Evgeny Rivkin, professor of piano at the UGA Hugh Hodgson School of Music, will perform a solo recital of works from Chopin, Debussy and Haydn when the Thursday Scholarship Series makes its 2017 debut in Hodgson Concert Hall Jan. 12 at 7:30 p.m.

Rivkin has performed across the globe, mentored countless musicians in his 21 years at UGA and performed solo recitals in the Hodgson School’s flagship concert series for nearly his entire tenure.

The first piece of the program is Haydn’s Piano Sonata in E-flat major. Written between 1789 and 1790, the work is commonly considered to be the beginning of the Austrian composer’s late, mature style, featuring frequent alternations between staccato and legato and smoother transitions than his earlier works.

Chopin’s Piano Sonata No. 2 in B-flat minor completes the first half of the program and displays Rivkin’s talent as he performs one of the 19th-century piano virtuoso’s most well-known works. Though the emotional, four-movement sonata has become an influential work, in its time, it was not met with acclaim.

After intermission, Rivkin will perform Book 1 of Debussy’s “Preludes,” 12 pieces written in the space of three months between 1909 and 1910. Each of the preludes within the book has a title that describes some aspect of that composition. But those titles were written at the end of the works, suggesting that Debussy wanted readers to develop their own interpretation of the music without being influenced by the titles.

To view the performance calendar, subscribe to the weekly email concert listing or learn more, go to music.uga.edu.