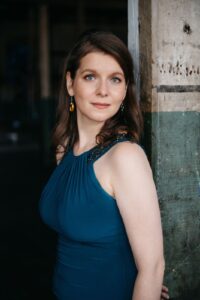 Whether it is teaching, performing, collaborating or recording works for piano, Liza Stepanova, associate professor of piano in the Hugh Hodgson School of Music, puts her heart and soul into everything she does.

Originally from Belarus, Stepanova brings her own experiences as a European immigrating to the United States to her recent solo performance and recording project, E Pluribus Unum.

E Pluribus Unum celebrates the contributions of immigrants to American musical life. The album showcases a confluence of voices, narratives and ideals created by nine composers representing a diverse array of immigrant backgrounds and stories. A centerpiece of the album is a newly commissioned work by Iranian American composer Badie Khaleghian.

“This has been a personal and meaningful project for me on many levels—an inner exploration of my own journey as an immigrant, an opportunity to connect and collaborate with my hyper-talented former UGA student Badie Khaleghian and a vibrant community of colleagues around the country,” said Stepanova.

The album has been broadcast nationally and internationally, garnering attention from around the world, including a recognition for Stepanova as Musical America Worldwide’s New Artist of the Month, one of only a dozen pianists to receive this distinction since Musical America began the honor in 2009.

Stepanova is the subject of an extensive interview published in the San Francisco Classical Voice about her artistry, projects and music making during the pandemic, as well as an upcoming interview, to be published in February 2021, on WGTE Classical Conversations.

The project was funded by a grant from the University of Georgia Willson Center for Humanities and Arts. Stepanova’s other solo and chamber music recordings also continue to be broadcast by American Public Media’s Performance Today throughout the year.

Stepanova studied at the “Hanns Eisler” Academy in Berlin, Germany, and received her DMA from The Juilliard School with a Richard F. French Award. She has performed internationally in venues including the Berlin Philharmonic Hall, Carnegie Hall and The Kennedy Center.  Following appointments at Smith College and The Juilliard School, she has been teaching at the Hodgson School since 2015.