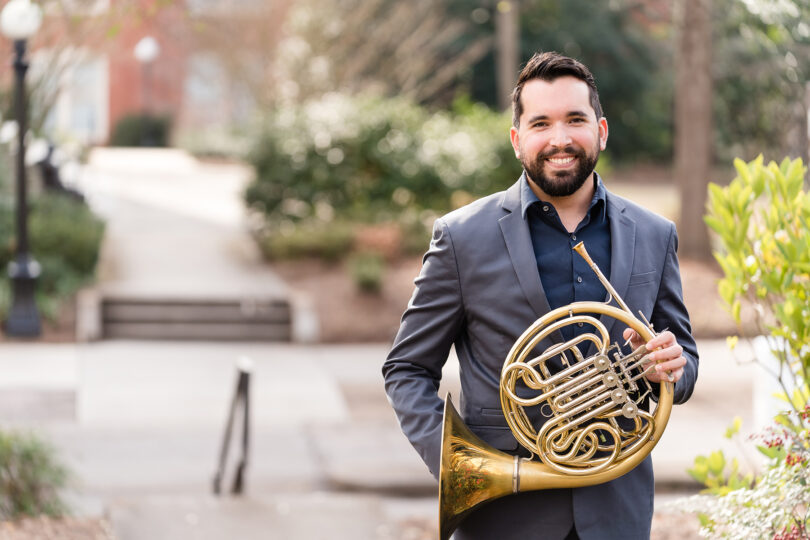 James Naigus, lecturer of horn in the Hugh Hodgson School of Music, is set to perform his first Faculty Artist Series concert. Performing works by all living composers, Naigus will record his concert in Ramsey Hall, and the concert will premiere March 23 at 7 p.m.

This recital features a mix of works for horn and piano, as well as solo horn. All of the works on the recital are modern.

“My goal in programming was to select pieces that tell a story—from the beautiful yet dark landscape of Iceland, to soaring in the clouds, to a piece called ‘I Threw a Shoe at a Cat.’ (No cats were harmed in the making of this piece!),” said Naigus.

He will also be performing his newest solo composition Visions, for horn and fixed media.

Joining Naigus on his concert is collaborative pianist Damon Denton.

“My goal in programming these works was to pick music that is No. 1 fun to play, No. 2 fun to listen to, and No. 3 offers a variety of sounds, styles and composers,” said Naigus.

Other composers on the program include Scott Boerma, Drew Phillips and Paul Basler.

Naigus is also a hornist with the Georgia Brass Quintet. He is co-founder of the Cor Moto Horn Duo with Phillips and co-editor/contributor of the Creative Hornist and Technique Tips columns in the Horn Call, the journal of the International Horn Society.

The concert will premiere on the HHSOM YouTube channel.