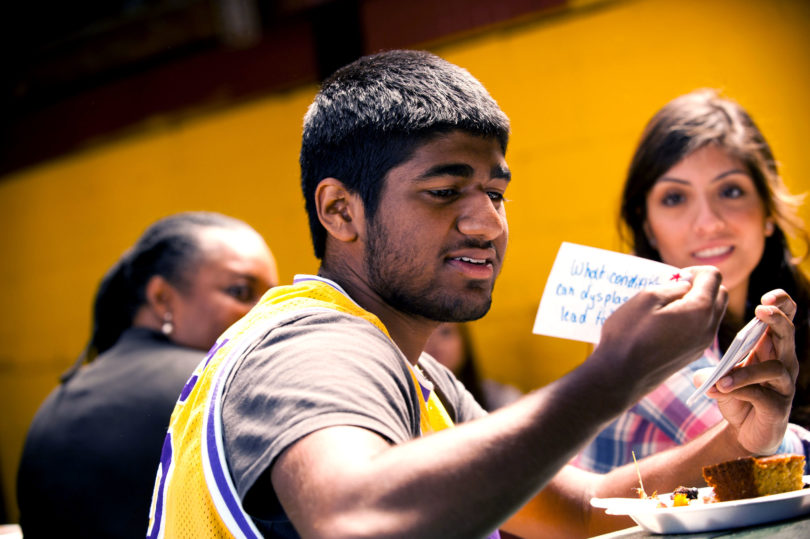 Students in Paige Carmichael's First-Year Odyssey Seminar class answer veterinary science questions while taking a cultural excursion to an area restaurant. The FYO Seminar Program is one of several initiatives the university has created to increase retention rates.

Degree completion has been a long-standing priority for the University of Georgia, but now the bar on the number of students earning a college degree is being raised.

UGA released its Complete College Georgia plan last month as part of a statewide project coordinated by the University System of Georgia to improve student access to college and increase retention and graduation rates among the system’s institutions over the next eight years.

Each institution has developed a CCG plan tied to institutional goals tailored to the academic needs of the campus. UGA’s goals include increasing graduation rates to the mean of its aspirational institutions, increasing scholarship funding for student financial support and supporting college readiness.

“UGA is in a strong position to meet its goals,” said Laura Jolly, vice president for instruction. “Well before the USG reached out to universities and colleges for their CCG plans, UGA has engaged for the last decade in several initiatives focused on student success, increasing access to college and improving retention and graduation rates.”

One such program is CLASE, the College of Education’s Center for Latino Achievement and Success in Education, an educational research and development center that aims to narrow the achievement gap of Latino students placed at risk due to poverty and language barriers and to improve the level of education of Latino students statewide.

“I knew that I wanted to go to college, but I had no idea how,” said Niurklin Jiminez, a fourth-year mathematics education major and Goizueta Foundation Scholar. “I was the first generation in my family to attend school in the United States, and my parents could not provide me with the information I needed about financial aid and college applications. CLASE provided information that was specific for my situation.”

Other established programs that are part of UGA’s CCG plan include the First-Year Odyssey Seminar Program, undergraduate STEM (science, technology, engineering and mathematics) initiatives and numerous K-12 partnerships. These programs engage and prepare students for college, as well as provide them with the tools needed to be successful once they step on to campus.

Due to the impact of these programs, UGA’s retention rate for first-year students has been at least 93 percent for the past ten years; it is currently 94 percent. The six-year retention and graduation rates are the highest among system institutions in Georgia and among the highest of UGA’s -comparator peer institutions.

A major goal of the UGA CCG plan outlines steps to narrow the gap between the six-year completion rate (83.3 percent) and the five-year (79.4 percent) and four-year (57.7 percent) rates, respectively. UGA’s retention and graduation rates also are ranked high among aspirational institutions, including Cornell University, UC-Berkeley, Penn State and UNC.

UGA’s multifaceted plan recognizes the contribution of the vision, mission and goals articulated in both its 2020 Strategic Plan and Institutional Diversity Plan. In addition, two new campus initiatives, ConnectUGA and the Retention, Progression and Graduation Partnership, contribute to the model. ConnectUGA will bring student information into one system and enhance data analytics and reporting to inform CCG goals. The RPG Partnership will continue to serve as a campus-wide coordination and communication system making recommendations regarding current or potential programs and services that may increase UGA’s retention and graduation rates. Using this model, specific CCG strategies will sustain focus on student access and success.

“At UGA, we are starting from a positive place of having had real success in these areas, particularly compared to national and state averages,” said Michelle Garfield Cook, associate provost and chief diversity officer and a member of the RPG Partnership committee. “The establishment of the RPG partnership by Vice President for Instruction Laura Jolly demonstrates the institution’s commitment to long-term improvements and continued success for our students.”

The ultimate goal of CCG is to ensure that more students are given the tools to make a degree possible by providing the necessary financial and academic resources.

However, the true measures of success are evident in students like Jiminez who have participated in UGA’s college readiness programs. Jiminez plans to finish her education degree in the spring, and then hopes to find a teaching job that will allow her to give back to her community.

Editor’s note: This is the first in a series of articles about what is being done at the university to improve retention and graduation rates as part of the governor’s Complete College Georgia plan. Other programs included in UGA’s CCG plan will be highlighted in upcoming issues of Columns.