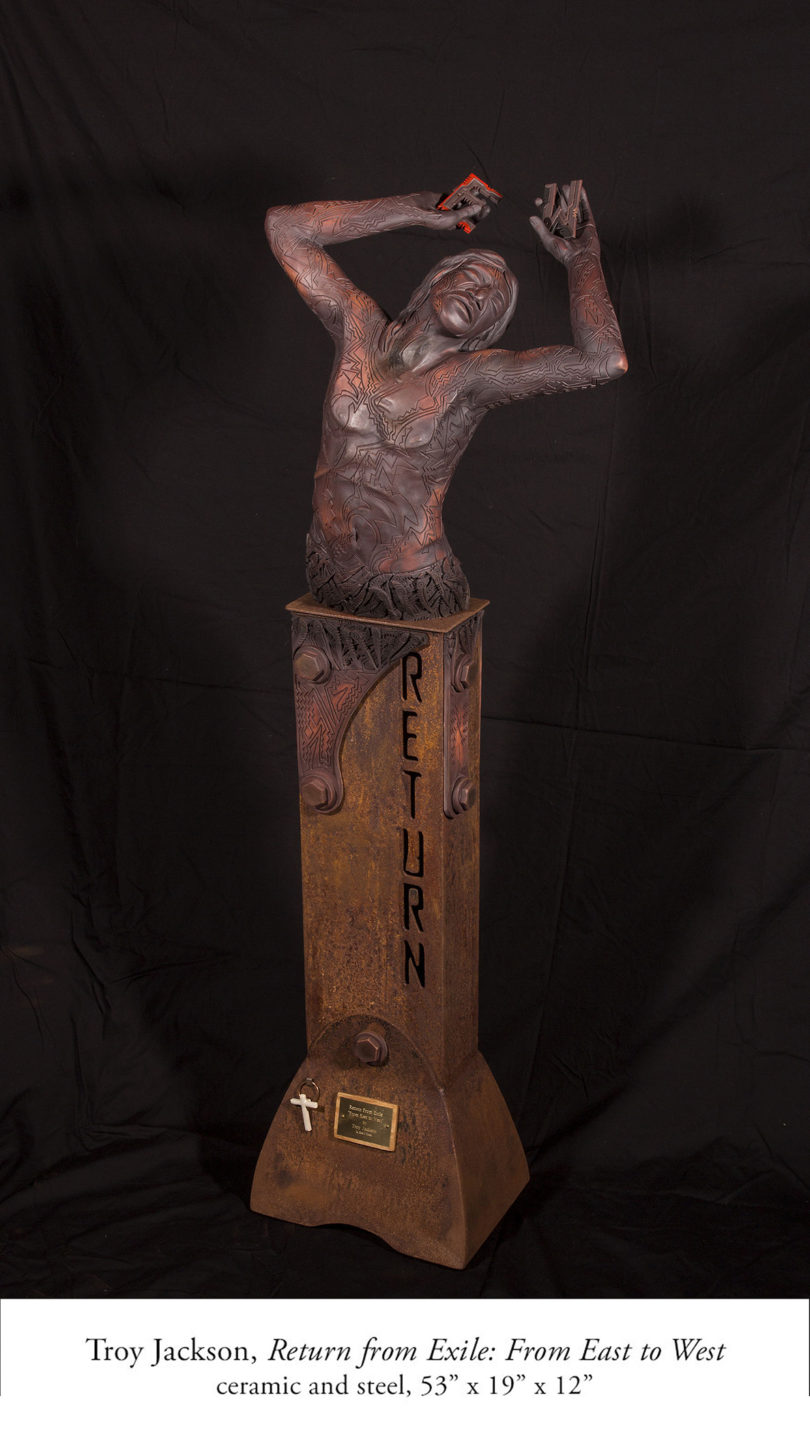 Troy Jackson's ceramic and steel sculpture "Return From Exile: From East to West" is part of the larger "Return from Exile" exhibition of more than 30 contemporary Southeastern Native American artists.

Athens, Ga. – For the last 500 years, and particularly since they began to be displaced and removed from their ancestral homelands, Native American tribes of what is now the Southeastern U.S. have returned annually for ceremonial rites on the autumnal equinox in late September.

“Return from Exile,” an art exhibition of more than 30 contemporary Southeastern Native American artists timed to coincide with annual homecomings, will be on view Aug. 22 to Oct. 10 at the Lyndon House Arts Center. The exhibition, which will begin a two-year tour of museums throughout the U.S., is sponsored by the University of Georgia Institute of Native American Studies and the Lyndon House.

On Saturday, Aug. 29, a daylong symposium will feature panels of artists and scholars of Native American art and guided gallery tours. An opening reception for the exhibition will be held at 6 p.m. Thursday, Sept. 10, and is sponsored by the institute. All events are free and open to the public.

The exhibition features art representing the five tribes removed from the Southeast in the 1830s: the Creek, the Cherokee, the Choctaw, the Chickasaw and the Seminole.

“Featuring those five tribes and in Athens is particularly apt because the Oconee River was the traditional dividing line between the Creeks and the Cherokee, so Athens straddles that territory literally in Georgia,” said Jace Weaver, the Franklin Professor of Native American Studies, director of the UGA Institute of Native American Studies and one of the exhibition’s curators.

The exhibition and symposium are bookends to related events designed to highlight the equinox and the celebration of Native American cultural heritage and return to the region.

On Tuesday, Sept. 22, the Lyndon House will host a screening of “This May Be the Last Time,” a documentary directed by Sterlin Harjo about the tradition of Creek Christian hymn singing.

On Wednesday, Sept. 23, the first American Indian Returnings, or AIR, talk will be held at 4:30 p.m. in Room 214 of the Miller Learning Center. The speaker will be Jodi Byrd, a citizen of the Chickasaw Nation and associate professor of English, gender and women’s studies at the University of Illinois Urbana-Champaign.

“AIR talks will focus on Southeastern Native epistemologies in the fields of the humanities, science, art and technology, spirituality and indigenous philosophies of Southeastern tribes who regard the Southeast as their original homelands,” said LeAnne Howe, Eidson Chair of American Literature at UGA and organizer of the event. “The lectures will tackle, among other issues, the art of rediscovering balance through inclusion of Southeastern Indian histories and cultures.

“Many cultures and religions around the world observe these days as times for reflection, meditation and for the people to stargaze and ponder their existence,” Howe continued. “I want to bring Southeastern Native scholars to UGA who can speak to the myriad ways in which Natives are ‘returning’ to the Southeast.”

“Return from Exile” is curated by Weaver; Bob Martin, associate professor of visual art at John Brown University; and Tony Tiger, former chair of the art department at Bacone College in Muskogee, Oklahoma.

Following its run at the Lyndon House, the exhibition will travel to the Collier County Museum in Naples, Florida. It will then travel the country through 2017 to venues including the Gilcrease Museum in Tulsa, Oklahoma, and the Cherokee National Museum in Park Hill, Oklahoma.

“Return from Exile” is supported by the UGA Institute of Native American Studies, the Southeastern Indian Artist Association, the Lyndon House Arts Center, the UGA President’s Venture Fund, the Native Arts and Cultures Foundation, the Cherokee Nation and the Muscogee Nation.