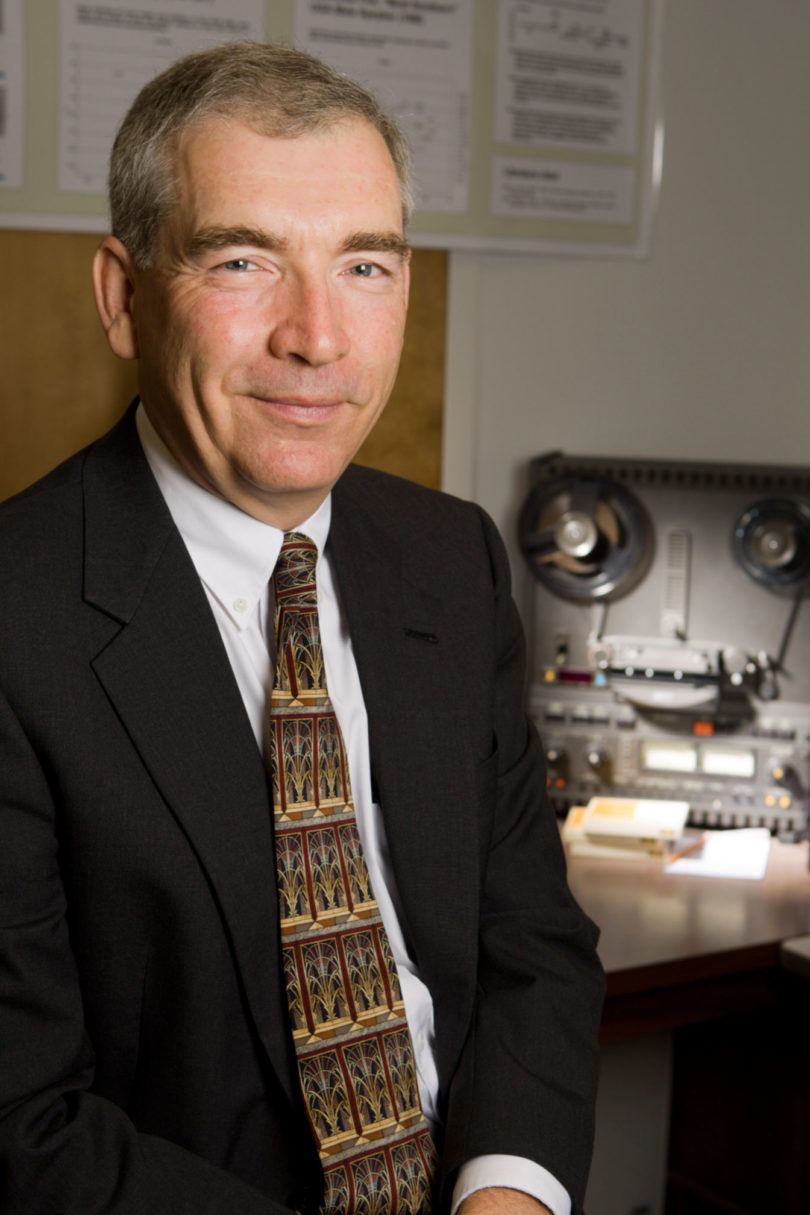 William Kretzchmar is the Harry and Jane Willson Professor in Humanities.

Sonja Lanehart and Bill Kretzschmar, who are both on the English department faculty, are working together on a pilot survey of speech in Atlanta. They explained the project to ­Columns.

Columns: I understand this is a small pilot for a larger survey.

Kretzschmar: We hope it will turn into something a lot more, but we’re so busy with it right now that we just have preliminary plans for taking it on the road.

Columns: You are surveying native speakers in Atlanta?

Lanehart: As near native as we can get. They only have to have lived there for at least half their life, but if they were born and raised there, that would be optimal.

Kretzschmar: One of the features of this proposal is that we’re using survey research techniques. We’ve got a randomized list of telephone numbers, and our graduate assistants called up people from that list so everybody in Fulton and DeKalb counties had an equal chance of being selected.

Columns: And you had equal numbers of blacks and whites and of males and females?

Kretzschmar: Yes, and blue collar-white collar. Having variables like that allows you to stratify your sample for survey research so that you can get some breadth in your coverage. If you had all men, what good would that be?

Since it’s a small sample this time, we needed to just have a few variables. Linguists often control for more variables than just those three, or control for variables like that in more detailed ways.

Columns: Tell me about the ­interview.

Kretzschmar: An in-person interview follows the telephone qualification. The students would get together with the person on a time and place to meet, typically in people’s houses.

Lanehart: You want them to be comfortable, because they are going to be talking about themselves.

Columns: Were undergraduates ­involved in the project?

Kretzschmar: This is something that I’ve been doing for years-you can get an undergraduate research supplement from the National Science Foundation. On this grant we had an undergraduate who went on some of the interviews with one of our interviewers, and then we had other undergraduates working with us here in the back office doing the transcriptions and other related work.

Columns: How many students?

Columns: Even though this is a pilot project, you’ll report your findings?

Kretzschmar: This body of research will be productive for many years. And not just for us. We expect to publish the results on the Web-with the full text of the interviews and the full sound. This grant does not have the funding for putting all of that on the Web-this is just a start, to see if we could do it. This is the first time that anybody has ever applied rigorous survey sampling methods to an urban survey.

Columns: That seems surprising. What has been done before?

Kretzschmar: You talk to people who have been recommended by community leaders and references. They’re not randomly selected, so you never know how well they actually represent the community. In our Atlanta study, rather than just picking the people we had access to, we have followed a rigorous random sampling method.

Columns: How many subjects?

Lanehart: We have 10 non-African Americans and 10 African Americans. Doing the transcriptions, doing the interviews-it takes a lot of time and work, and there is limited funding. That’s why it’s a pilot. To do this on a national basis would take a lot of money, so we started small.

Kretzschmar: We’re only talking to people in Fulton and DeKalb counties. If we were doing the whole Metropolitan Statistical Area, all of the counties around Atlanta, then we would need to interview 75 people to get the same sort of sampling. So this is a small study-it’s suggestive, but it’s not the be-all and the end-all about Atlanta speech.

But if it works well, then we can go to a funding agency like the National Institutes of Health with the idea of creating a national database. Speech pathologists typically use one set of vowel plots as the standard for American English-the same standard for everybody, no matter where you live. But we can pinpoint the differences ­between, say, a non-African-American female subject and an African-American female subject. The vowels are significantly ­different.

If we put all these up on the Web, then a speech pathologist who is working with, for example, an aphasic working-class male can find several people like that in this study and see what they sound like. Then you have real targets to match.

Columns: And this is all part of the linguistic atlas that resides here?

Kretzschmar: Yes, this is the third generation of linguistic atlas methods. We won’t take these interviews and put them in a book, but we’ll publish them all together on the Web, as further evidence about American English from different kinds of speakers. Our Web presence is well-known in humanities computing circles. It’s been used on four continents to teach about American English. This information will be up there alongside it.

Lanehart: The most important thing about this project, from my perspective, is the database aspect-that this material will be available, that all researchers will have access. That is unusual.

I was involved in trying to develop a database of African-American language about three years ago, and it has yet to emerge. Researchers think “It’s my data and it’s for me to publish.” People will be able to use this data to get answers.

Kretzschmar: One of the ideas behind doing this pilot project was to demonstrate that we could do it quickly-some linguistics projects go on for decades. Now, we’re ready to see how we can make this be most useful to practitioners.