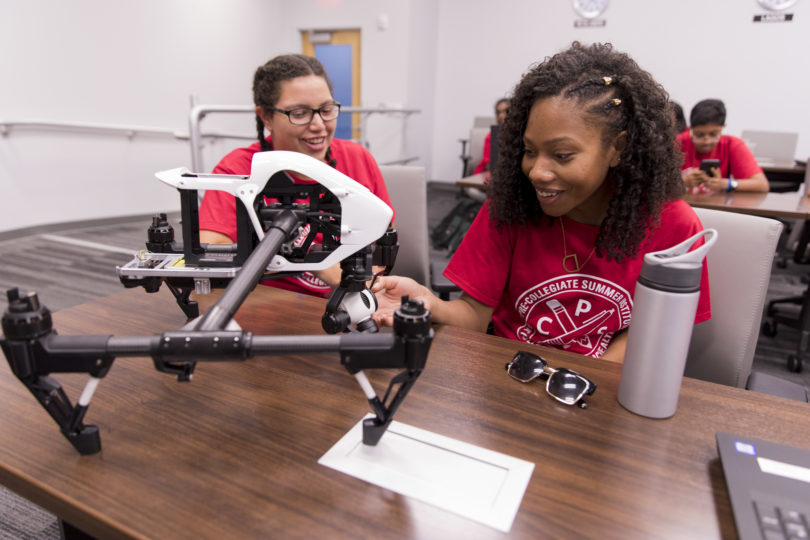 High School seniors Danielle Rodriguez and Derrica Cullins look at a drone the Institute for Disaster Management uses with disasters inside the Emergency Operations Center on the Health Sciences Campus. (Photo by Andrew Davis Tucker/UGA)

“UGA has been my dream school for so long,” Justin Edge said. “This is the school for me. It’s a great institution.”

That dream became a reality for Edge and three other first-year law students named to the initial group of Benham Scholars thanks, in part, to New Approaches to Promote Diversity and Inclusion grants, which supports the program by funding the students’ participation in the school’s early start program in addition to offering academic support and professional development opportunities.

The Benham Scholars program, named for Robert Benham, the first African American to serve on the Supreme Court of Georgia and the second African American graduate of UGA’s School of Law, is just one of the 21 grant proposals funded through the program, which was announced by UGA President Jere W. Morehead in August 2017.

A total of $300,000 was awarded in January 2018 as part of the program. The $10,000 to $25,000 grants are used for the development or adoption of new projects that support the recruitment, retention and success of underrepresented, underserved and first-generation students at UGA. 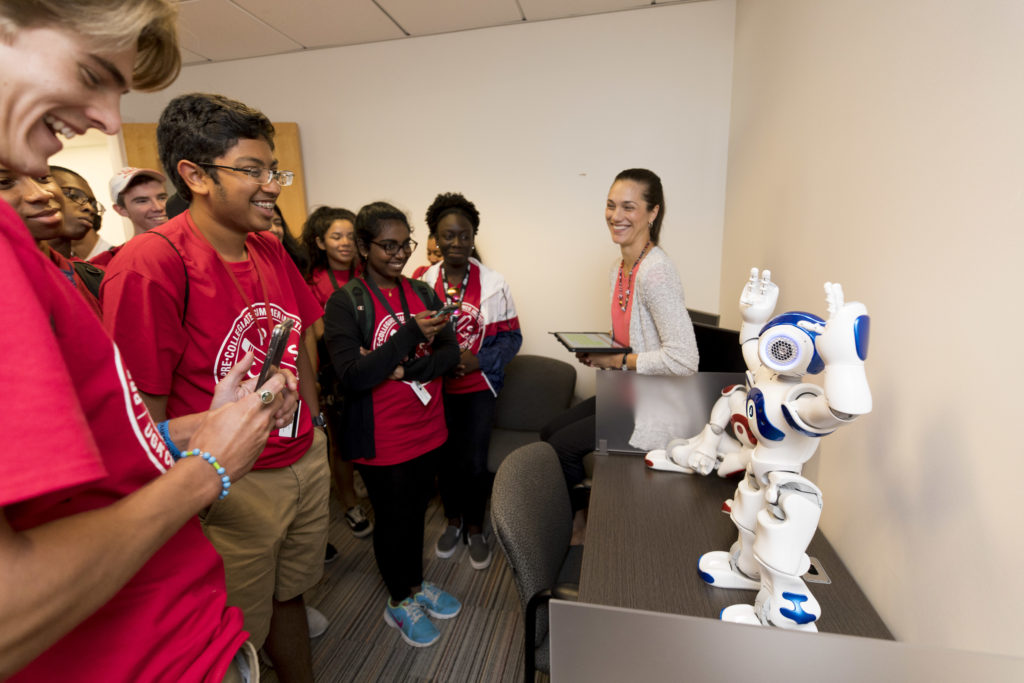 High School seniors laugh at a therapy robot with assistant professor Jenay Beer in the Assistive Robotics and Technology Lab on the Health Sciences Campus. (Photo by Andrew Davis Tucker)

“The New Approaches grants are making an incredible impact on broadening the access, success and engagement of students from a range of backgrounds through innovative programs and initiatives,” said Michelle Cook, vice provost for diversity and inclusion and strategic university initiatives. “The effect is being felt across the state as young people are being exposed to the opportunities for exploration and growth through higher education.”

“We’ve created something that not only will help students now, but, looking forward, also will help us to open the profession to more people,” Jackson said. “We intend to have our fingers on their pulse to see how they’re adjusting emotionally and academically. With the students in mind, we can do some really great things.”

The program includes academic support and professional development opportunities such as mentorships, meetings with law school alumni and transportation to and from Atlanta for those opportunities. The intention is that these students graduate, pass the bar exam and then serve the state as an attorney.

Edge plans to eventually make an impact in his hometown. “I can see myself going back to Americus. I’d like to learn, get my training and go back home as a polished attorney to assist the community,” he said. “With the tools I’ll learn here, I’ll be able to go home and serve whomever needs help.”

Other New Approaches grants focus on recruiting prospective undergraduate students. During the week of July 9, the College of Public Health brought 22 rising high school seniors from across Georgia to campus for a pre-collegiate summer institute. The program, funded in part through a New Approaches grant, serves as an introduction to what life is like for UGA’s public health students.

In fact, current public health students served as counselors and mentors to participants and led them through a variety of sessions that included public health classes, seminars and workshops on financial aid and admissions essay writing.

The goal, according to Brittani Harmon, coordinator of the institute and clinical assistant professor of health policy and management, is to give participants an experience “as close to freshman year as possible.” That experience included staying in dorms, eating at Bolton Dining Commons and learning about campus culture.

“This is a good primer for them to be able to practice their skills in a controlled environment,” she added. “They’re the next generation of go-getters.”

John Kang, one of those go-getters from Lawrenceville, learned much more than facts and figures at the institute. “After this week, I can say with confidence that my eyes have been opened to new perspectives and new career pathways. After seeing the range of majors and routes the student counselors have been through, I now understand the true nature of college and its purpose: to promote growth.” 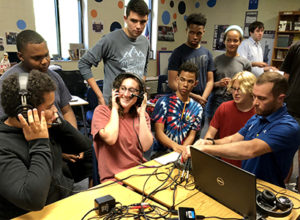 Journalism students volunteering for the UGA-Grady High School Sports Broadcast Program try out the equipment for the first time. (Photo by Vicki Michaelis)

Since the beginning of the school year, Grady Sports Media students have traveled to Cedar Shoals a few times a month for after-school training sessions focusing on all parts of sports broadcast journalism, from producing and camera work to play-by-play announcing, building in-game graphics and tracking game statistics. Friday nights are spent in the stadium press box where the high school students, under the leadership of the college students, practice what they have learned by producing a live broadcast of Cedar Shoals football games.

Both sets of students learn from each other. Cedar Shoals students gain practice through this on-the-job training experience. Grady College students gain valuable mentorship skills and have an opportunity to share their collegiate experiences.

“We are grateful that this idea we’ve had in our minds for a while is coming to fruition because of this grant,” said Vicki Michaelis, who helped write the grant and serves as the John Huland Carmical Chair in Sports Journalism and Society and director of Grady Sports Media.