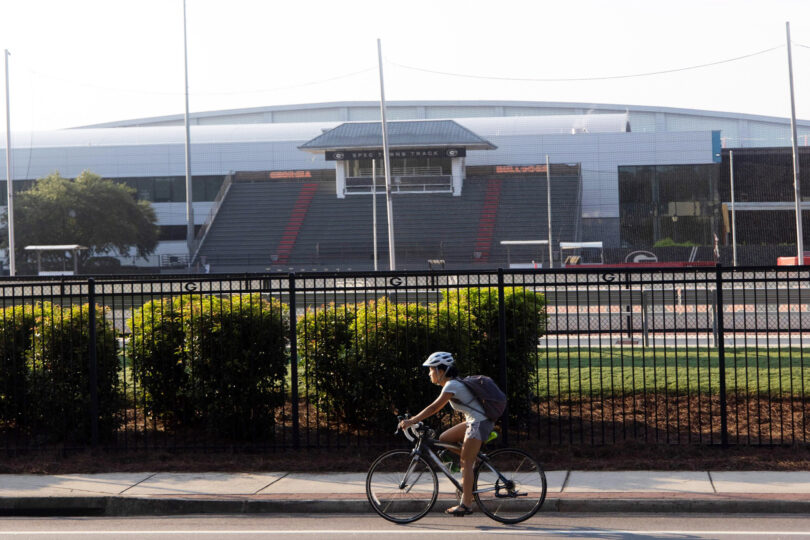 A student bicycles to class down Lumpkin Street. (Photo by Andrew Davis Tucker/UGA)

It was created by UGA’s Community Mapping Lab and BikeAthens

Athens residents looking for a new way to pedal around the city will soon have a new way to plan their trip. An online mapping application created by UGA’s Community Mapping Lab will provide a fresh look at the most bike-friendly streets to get around the city. Created through a collaboration with local nonprofit BikeAthens, the map highlights the strengths of local biking infrastructure, such as multi-use paths and dedicated bike lanes. But it also shows that much work still remains to be done.

The idea for this map originated with a conversation between Scott Long, the executive director of BikeAthens, and Jerry Shannon, associate professor in the departments of geography and financial planning, housing, and consumer economics, in August 2019. BikeAthens had created several previous biking maps of the city, but all were created as paper maps, and the most recent one was 11 years old. 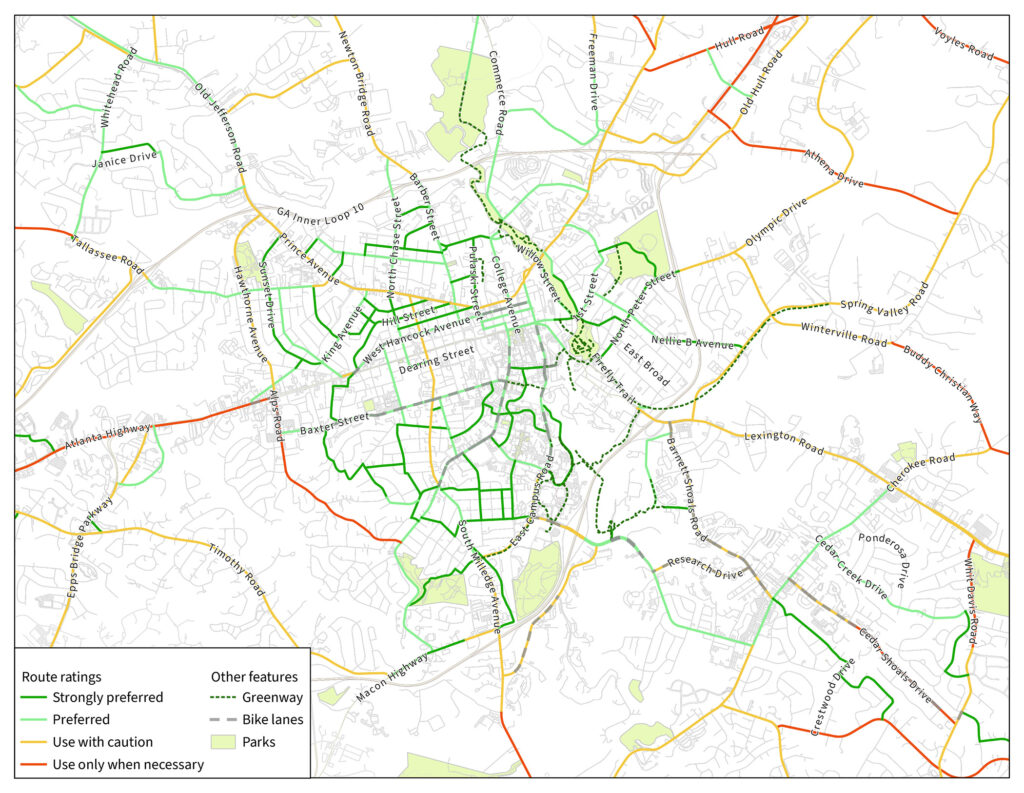 Since that initial conversation, four undergraduates in Shannon’s Community Mapping Lab have worked on the project: Regina Nasrallah, Emilie Castillo, Olivia Gilliam and Sam Shuster. Their jobs included obtaining initial public feedback on the factors most important for bikers in planning a route, running thousands of simulated routes through online mapping software, and designing a web interface that works across multiple platforms.

The original plan was to solicit feedback on proposed routes at the many events hosted by BikeAthens. COVID has made that difficult, but the working group is gathering feedback through an online survey with the map’s release. Other contributors to the effort include Alison Smith and Doug Pardue, faculty in the College of Environment and Design, BikeAthens board President Jason Perry and ACC Bike Pedestrian Coordinator Daniel Sizemore.

“This map is an important step forward in advancing inclusive micromobility in Athens, particularly in its blending of community and data inputs, its inclusion of topography in route selection, and its open online accessibility,” said Douglas Pardue, associate professor in the College of Environment and Design. “It’s an exciting and potentially transformative tool that will help Athenians to safely explore and use Athens’ small but rapidly growing pedestrian and bicycle infrastructures.”

The resulting map, available on the BikeAthens website, suggests the best streets for bike riders, but also marks areas with steep inclines, transit stops and local amenities. Shannon said that the shift from paper maps to a web application is important. 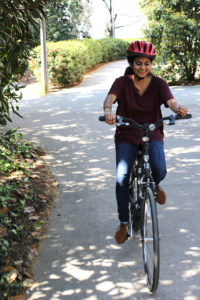 Sahana Srivatsan takes a spin around North Campus on a Bulldog Bike.

“People are already familiar with using a map on a smartphone,” he said. “The online map can be available anywhere at any time and is much easier to produce, distribute and update when routes or amenities change.”

The map rates roads in four categories: strongly preferred, preferred, use with caution, and use only when necessary. Streets in this last category, such as sections of Atlanta Highway or Highway 29, are often the only ways to get across town, yet they rarely offer protections from high-speed auto traffic.

“People often ask us the best ways to get around town on a bike,” said Scott Long of BikeAthens. “Having this resource for bike riders in Athens will help people get around a bit easier and safer. We will always need better facilities and infrastructure to connect different parts of town, and this map will help people take advantage of what we do have and also highlight new connections.”

While online services like Google Maps can still provide the fastest routes for a single trip, the collaborators behind this map hope that it can help new riders plan for the best ways to make daily trips around Athens. In future years, this map can inform local planning for future bike infrastructure projects, such as a new separated bike lane planned on Barber Street.

“We are in a time of very rapid expansion of active transportation infrastructure throughout Athens,” Long said, “and this dynamic map will be able to keep up with the changes in a way that a paper map never could.