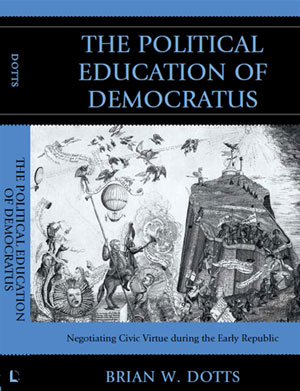 Brian Dotts, a lecturer in the College of Education’s elementary and social studies education department, has written The Political Education of Democratus: Negotiating Civil Virtue during the Early Republic.

The book illuminates the emergence of democratic thought from Aristotle and Machiavelli to more contemporary influences from the British Commonwealth tradition. It examines how the radical educational and democratic ideas of Algernon Sidney, James Harrington, John Milton, Joseph Priestley and Thomas Paine developed a rich design among the Democratic-Republican societies that emerged during the 1790s.

Individual members of the Democratic-Republican societies energized these radical interpretations of civic republican thought and plunged headlong into party politics, educating early Americans about the practical potentialities of democratic action.