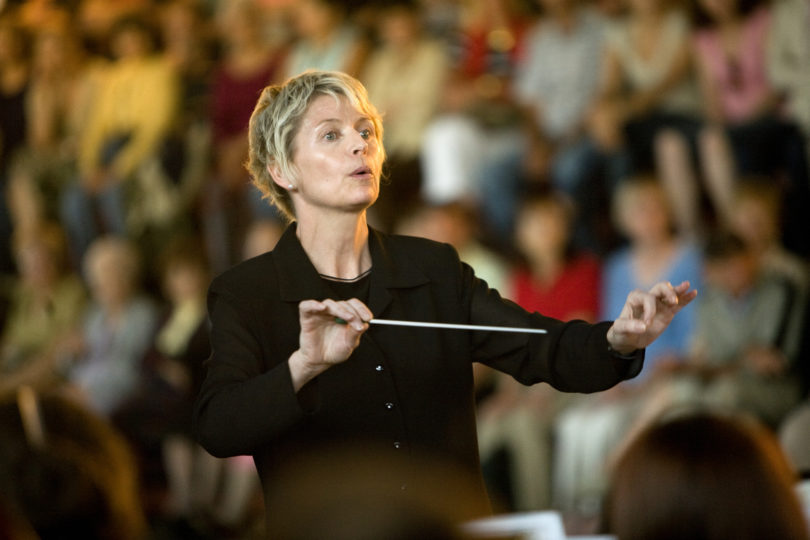 The ensemble, led by new director of bands Cynthia Johnston Turner, will present a program of music written entirely by American composers. Selections include Joan Tower’s “Fanfare for the Uncommon Woman, No. 2,” John Adams’ “Short Ride in a Fast Machine” and Leonard Bernstein’s “Slava!” and “Symphonic Dances from West Side Story.”

“Jazz is America’s music, and the work of Bernstein and Adams tap into that genre,” said Turner, who began working in the Hugh Hodgson School of Music this fall. “It’s exciting, gritty music with artistic value that appeals to this country’s aesthetic, and their inclusion makes for an uplifting, fun performance.”

A name change—from the UGA Wind Ensemble to the Hodgson Wind Ensemble—represents the new direction and vision Turner has for the group. In addition to the renaming, Turner has altered the ensemble’s structure, reducing the number of performers to one per part.

“Excellence has its place,” Turner said. “These are the finest wind musicians here, and reducing the instrumentation encourages more ownership and responsibility, in addition to pushing students to be more sensitive musicians. It’s structured like a chamber ensemble—though that doesn’t mean we still can’t get quite loud when appropriate.”

The Hodgson Wind Ensemble has earned an international reputation for its artistry, with membership including only the most accomplished music majors. In recent years, the group has toured throughout the U.S. as well as Argentina, France and Switzerland.

Tickets for the performance are $18 for the general public and $5 for students and are available at the UGA Performing Arts Center box office.

Established in 1980, the 2nd Thursday Scholarship Series offers showcase performances by UGA students and faculty the second Thursday of each month throughout the academic year. Proceeds from individual ticket sales and season subscriptions help fund year-long academic scholarships and assistantships for students and present donors the opportunity to sponsor individual students of the music school at several levels of giving.

For more information on the 2nd Thursday Series or the Hodgson School of Music, see music.uga.edu.