After a two-year hiatus, the University of Georgia New Faculty Tour returned this year with 26 new employees spending four days traveling across Georgia and learning about the state’s economic, geographic, social and cultural diversity.

The tour passed through 13 cities and 40 of Georgia’s 159 counties stopping to show faculty members how UGA serves the state as its land- and sea-grant university, and how the office of Public Service and Outreach (PSO) and Cooperative Extension plays a role in that work.

Devin Lavender, a clinical assistant professor in the department of clinical and administrative pharmacy at the College of Pharmacy and a UGA alumnus, said the tour opened his eyes to the scope of the university’s reach.

“It makes me proud to be here, to be an alum, to be a faculty member, [and] to see the impact that the university has on the state,” Lavender said.

The first stop was Thomson, where participants learned about the economic development and leadership growth the community has experienced as a community in the Archway Partnership, a UGA Public Service and Outreach unit. In April, Thomson-McDuffie County also was named UGA’s inaugural Connected Resilient Community, which recognizes the extent to which the county has made improvements to ensure its sustainability.

“It was a tremendous learning experience for me because I didn’t even imagine UGA had such a reach in the community in so many different areas,” said Rhuanito Ferrarezi, an associate horticulture professor in the College of Agricultural and Environmental Sciences.

At the Georgia Ports Authority Garden City Terminal at the Port of Savannah, faculty members learned about the significant economic impact of the port, one of the busiest in the country. 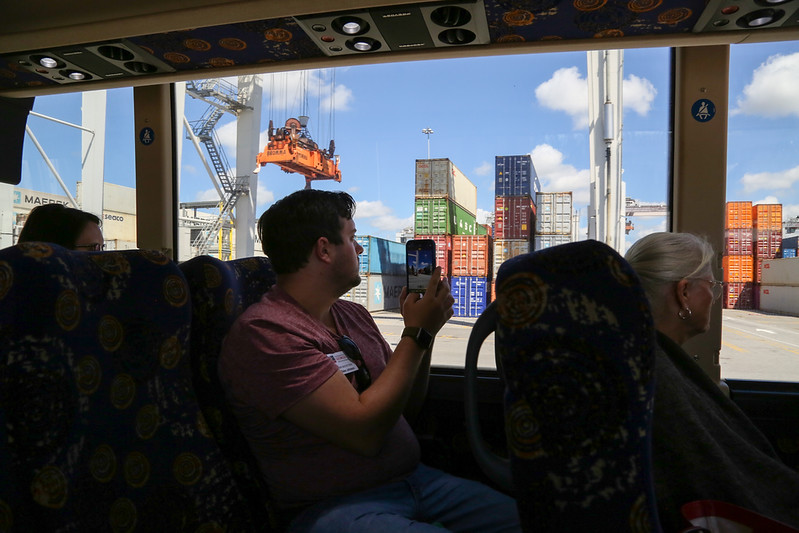 Tour participants got an up-close look at the Georgia Port of Savannah during a bus tour of the facility. The third largest port in the U.S. after New York and L.A., the Georgia Ports Authority helps drive Georgia’s perennial ranking as the No. 1 state to do business. (Photo by Shannah Montgomery)

In Baxley, the group toured the Interfor lumber mill. Dale Greene, dean of the Warnell School of Forestry and Natural Resources, told the group that Georgia ranks among the top forestry states in the nation.

“We’ve got a great sustainability story, and it’s just great to share that with them, [to] let them see the technology in these mills and how we’re trying to squeeze all the value possible out of these trees so that we don’t have to cut more,” Greene said.

The tour also made stops at the UGA campus in Tifton; the boyhood home of former president Jimmy Carter in Plains; the landmark H&H restaurant and the Otis Redding Foundation in Macon; the Martin Luther King Jr. National Historical Park and the National Center for Civil and Human Rights in Atlanta.

In Macon, faculty members saw the impact of NewTown Macon, a downtown revitalization effort led by the UGA Small Business Development Center and the J.W. Fanning Institute for Leadership Development—both units of PSO. 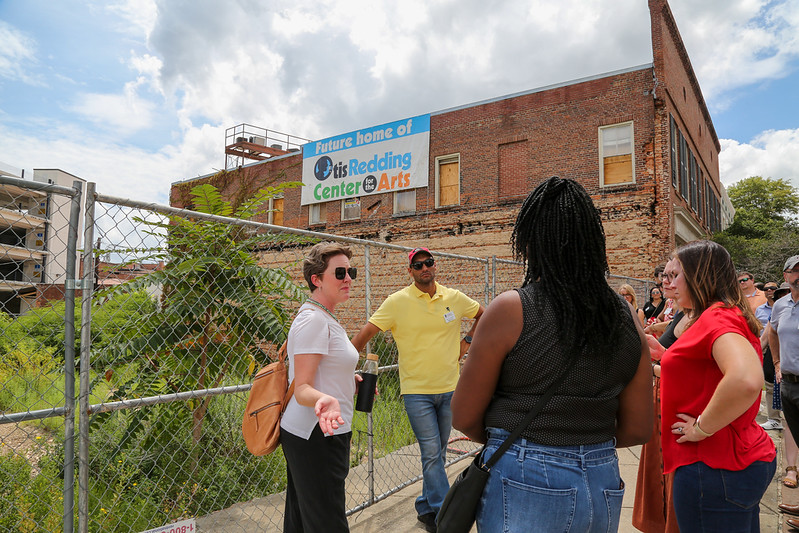 In Macon, the new faculty learned how the UGA Small Business Development Center and Fanning Institute for Leadership Development helped the community revitalize its downtown. Plans include converting an old building into the Otis Redding Center for the Arts, which will allow the Otis Redding Foundation to expand its musical education program for youth. (Photo by Shannah Montgomery)

“Seeing the growth that’s occurred in Macon and knowing that the university has played a huge part in that was really impactful to me,” said Lavender, who grew up in Macon. “It makes me want to continue to push to work through Public Service and Outreach and other outreach units to make sure that more cities can experience similar revitalizations.”

The faculty also learned about Macon’s ties to musicians like Otis Redding and the Allman Brothers Band. Before his untimely death in 1967, Redding provided young students with scholarships, and his foundation continues that philanthropic work. The foundation is set to build the Otis Redding Center for the Arts on Cotton Avenue in downtown Macon.

“I knew that Georgia had a great history of music but to see everything that the Otis Redding Foundation is doing, especially with their work with children, that’s where we need to start,” said Amy Petrongelli, an assistant professor in the voice department at the Hugh Hodgson School of Music in the Franklin College of Arts and Sciences. “And it’s just so exciting for me right before I start my work with our undergrads and our graduates to know that this is happening here in Macon so close to Athens.”