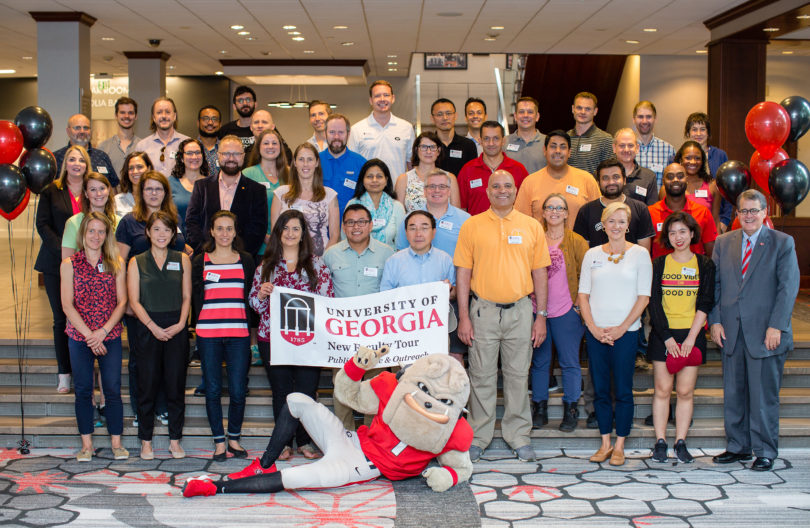 UGA President Jere W. Morehead poses with participants of this year's New Faculty Tour prior to their departure Aug. 5.

UGA’s whirlwind tour of the state kicked off its 35th run on Monday, with destinations including Amicalola State Park in the north Georgia mountains, the state Capitol and National Center for Civil and Human Rights in Atlanta, Pinewood Studios in Fayetteville, the UGA Griffin and Tifton campuses, Macon and Hawkinsville in middle Georgia, and the Pin Point Heritage Museum, UGA Marine Extension and Georgia Sea Grant, Gulfstream Aerospace and the Georgia Ports Authority on the coast.

S. Jack Hu, who began work July 1 as UGA’s senior vice president for academic affairs and provost, will be among the 40 new faculty members on the tour, who represent 18 university departments.

“Our new faculty always learn something about Georgia on this tour that they didn’t know before coming to UGA,” said Jennifer L. Frum, vice president for Public Service and Outreach. “Many discover similarities in their teaching and research, which can lead to great interdisciplinary partnerships. This year they have the added bonus of getting to know Dr. Hu just as he arrives at the University of Georgia.”

From Monday morning through Friday afternoon, Aug. 5-9, 2019, tour participants will pass through 41 of Georgia’s 159 counties, stopping in 16 cities to learn about Georgia history, culture, demographics, geography and economic drivers.

Along the way, the new faculty members, all of whom have been at UGA for no longer than two years, are encouraged to look for ways they can use their teaching and research to addresses challenges in Georgia communities.

“Over the years, this tour has provided opportunities for our faculty and students to take their academic knowledge into communities and apply it to address a real-world situation,” UGA President Jere W. Morehead said. “Participants on the tour come back to campus with a solid understanding of UGA’s role as the state’s land-grant and sea-grant mission.”