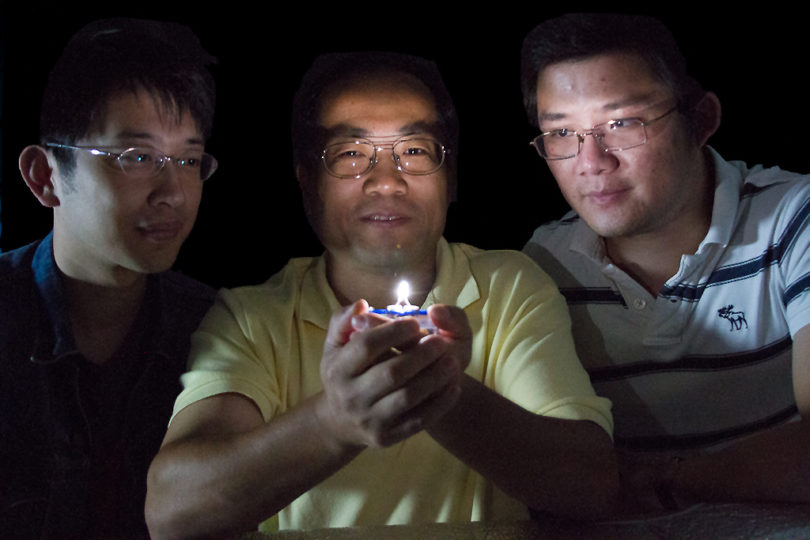 The University of Georgia's Zhengwei Pan

Athens, Ga. – Light emitting diodes, more commonly called LEDs, are known for their energy efficiency and durability, but the bluish, cold light of current white LEDs has precluded their widespread use for indoor lighting.

Now, University of Georgia scientists have fabricated what is thought to be the world’s first LED that emits warm white light using a single light emitting material, or phosphor, with a single emitting center for illumination. The material is described in detail in the current edition of the Nature Publishing Group journal “Light: Science and Applications.”

“Right now, white LEDs are mainly used in flashlights and in automotive lamps, but they give off a bluish, cool light that people tend to dislike, especially in indoor lighting,” said senior author Zhengwei Pan, an associate professor in the department of physics in the UGA Franklin College of Arts and Sciences and in the College of Engineering. “Our material achieves a warm color temperature while at the same time giving highly accurate color rendition, which is something no single-phosphor-converted LED has ever been shown to do.”

Two main variables are used to assess the quality of artificial light, Pan explained. Correlated color temperature measures the coolness or warmth of a light, and temperatures of less than 4,000 kelvins are ideal for indoor lighting. Correlated color temperatures above 5,000 kelvins, on the other hand, give off the bluish color that white LEDs are known for. The other important measure, color rendition, is the ability of a light source to replicate natural light. A value of more than 80 is ideal for indoor lighting, with lower values resulting in colors that don’t seem true to life.

The material that Pan and his colleagues fabricated meets both thresholds, with a correlated color temperature of less than 4,000 kelvins and a color rendering index of 85.

Warm white light can commonly be achieved with a blue LED chip coated with light emitting materials, or phosphors, of different emitting colors to create what are called phosphor-based white LEDs, Pan said. Combining the source materials in an exact ratio can be difficult and costly, however, and the resulting color often varies because each of the source materials responds differently to temperature variations.

“The use of a single phosphor solves the problem of color stability because the color quality doesn’t change with increasing temperatures,” said lead author Xufan Li, a doctoral student in the College of Engineering.

To create the new phosphor, Pan and his team combine minute quantities of europium oxide with aluminum oxide, barium oxide and graphite powders. They then heat the powdered materials at 1,450 degrees Celsius (2,642 degrees Fahrenheit) in a tube furnace. The vacuum of the furnace pulls the vaporized materials onto a substrate, where they are deposited as a yellow luminescent compound. When the yellow luminescent compound is encapsulated in a bulb and illuminated by a blue LED chip, the result is a warm white light.

Although his team’s results are promising, Pan emphasized that there are still hurdles to be overcome before the material is used to light homes, businesses and schools. The efficiency of the new material is much lower than that of today’s bluish white LEDs. Scaling the production to an industrial scale will be challenging as well, since even slight variations in temperature and pressure in the phosphor synthesis process result in materials with different luminescent colors.

The new yellow phosphor also has a new lattice structure that has not been reported before. The researchers currently are working to discern how the ions in the compound are arranged in hopes that a better understanding of the compound at an atomic level will allow them to improve its efficiency.

“We still have more work to do,” Pan said, “but the color temperature and rendition that we have achieved gives us a very good starting point.”

The U.S. National Science Foundation, the National Basic Research Programs of China and the U.S. Department of Energy funded the research.