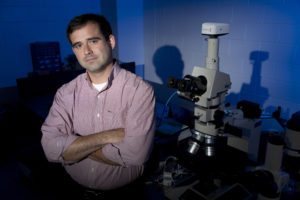 Jason Locklin, director of the New Materials Institute and a professor in the chemistry department of the Franklin College of Arts and Sciences, was recently quoted in an article from The Wall Street Journal about the claims behind an up-and-coming plant-based plastic.

Nodax—a plant-based plastic owned by Danimer Scientific, Inc.—is used by some companies who claim the plastic can biodegrade in oceans in a few months. Although Nodax does break down faster than fossil-fuel plastics, many claims about the plastic are misleading and exaggerated, scientists say.

“The claims are what I would call sensationalized,” Locklin said of Danimer’s Nodax marketing.

Locklin is the director of the university’s New Materials Institute and co-authored a study that Danimer cited as validating its material.

Making broad claims about Nodax’s biodegradability “is not accurate,” he said. “I think that’s greenwashing.”

The article continued to note that Danimer said its claims are factual and assessed the biodegradability of plastics.