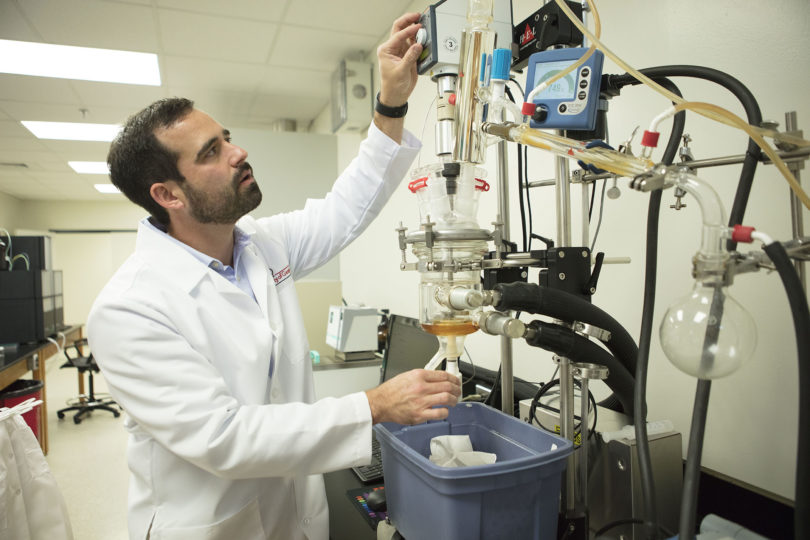 Jason Locklin adjusts an instrument in one of his laboratories. Locklin, who directs the UGA New Materials Institute, is a Distinguished Faculty Scholar in the College of Engineering and a professor. (Photo by Terry Allen taken in 2017)

Company bringing 200 jobs to Athens is an essential university partner

When University of Georgia professor Jason Locklin met Daniel Carraway over 10 years ago, neither of them knew their professional relationship would result in a substantial economic development investment in Athens.

Back in 2008, Locklin, who is now director of UGA’s New Materials Institute, was an assistant professor in chemistry and engineering at UGA. Carraway, a UGA alumnus and serial entrepreneur, was looking at universities, trying to find the perfect spot for one of his employees to attend graduate school.

“We met and hit it off, and after that he decided he wanted the student to work for me,” Locklin recalled. “We started working on projects together and haven’t stopped since.”

About five years ago, Carraway co-founded RWDC, a company to commercialize microbially degradable polymers, which are combined with other materials to make resins, from which single-use articles are made. These polymers, co-developed by Carraway, Locklin and Dr. Branson Ritchie, aim to solve the environmental problem of petroleum-derived single-use plastics. 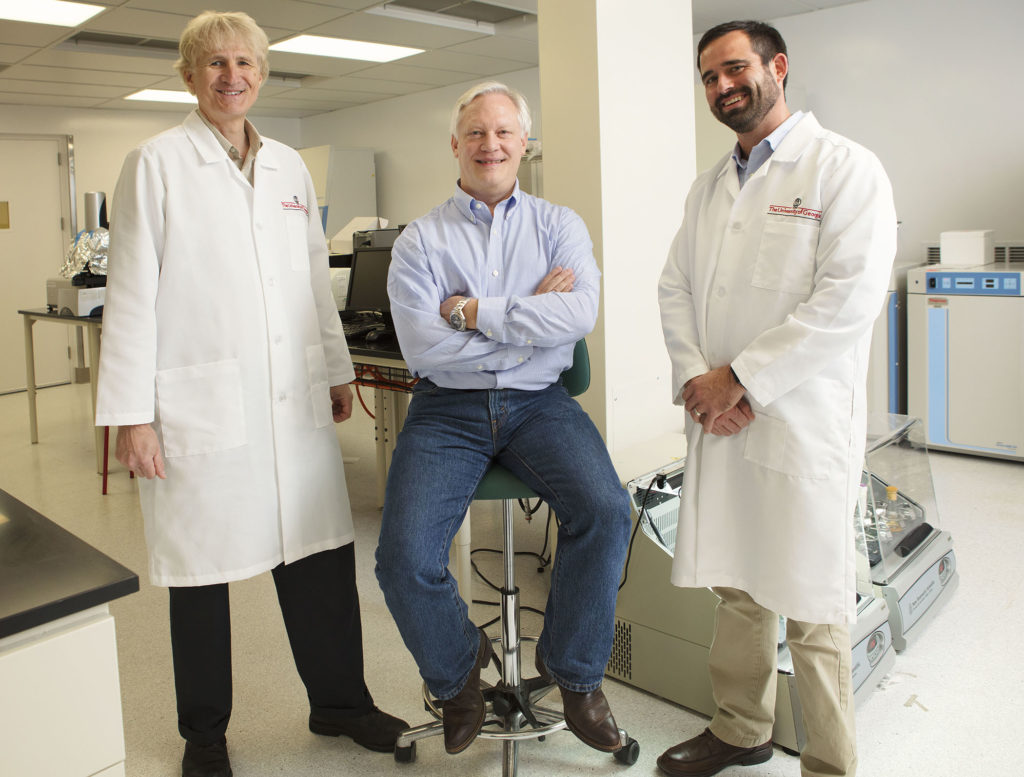 Dr. Branson W. Ritchie (left), a veterinary researcher and director of technology development and implementation for the New Materials Institute; Daniel Carraway (center), a UGA alumnus who is co-founder and CEO of RWDC Industries; and Jason Locklin, a polymer chemist and director of the UGA New Materials Institute. (Photo by Terry Allen taken in 2017)

“Petroleum-derived plastics are a health and environmental nightmare,” said Ritchie. “And the solution is microbially degradable materials. A straw, a cup, a plate, a knife, a donut box. It’s your magazine coated paper. It’s your Tupperware container, etc. Look through your life. Our goal is to replace the items you use every day and discard, one by one with materials that don’t damage the environment.”

In their current state, plastics can take multiple centuries to disintegrate in a process called micronization. Petroleum-derived plastic products manufactured since the 1950s still exist in some form in landfills and as trash on the Earth and in the sea.

“No one knows how long the micronized particles that are not visible to us will persist on our planet, but our research is indicating that these tiny particles may be the most dangerous forms of environmentally persistent plastics,” said Ritchie.

To provide a sense of scope, 8 million metric tons of plastic enter the oceans per year, according to a 2015 landmark study by UGA professor Jenna Jambeck, who leads the institute’s Center for Circular Materials Management in the College of Engineering. Jambeck’s research also found that all plastic waste generated between 1950 and 2015, including plastics sent to recycling centers, totaled 6,300 million metric tons, of which 9% were recycled.

Locklin’s and Ritchie’s solution to the plastic problem uses plant-based sources. “The beauty of the material is it’s truly a circle,” said Ritchie. “You use a product manufactured with one of our resins, and when you’re done with it can be discarded into a waste system where microbes chew it up and turn it back into carbon dioxide and water.” 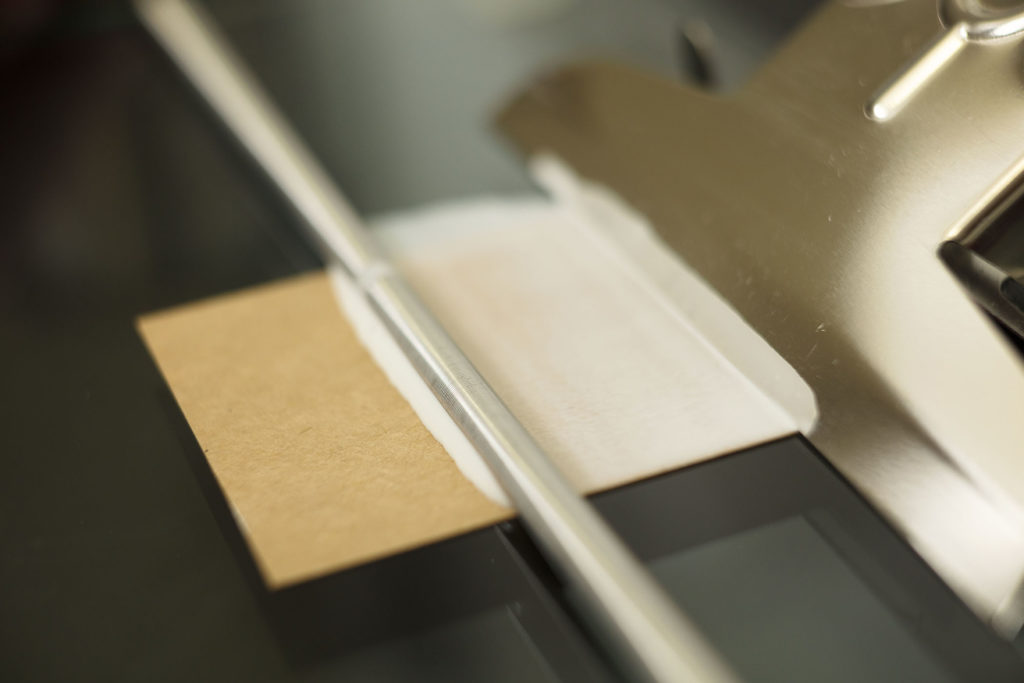 The New Materials Institute and RWDC are also developing bio-based coatings to replace the conventional plastic coatings currently in use, which slow down the degradation of paper cups. (Photo by Terry Allen)

The ongoing development of resins, made from the base polymer, to create various single-use articles fuels the partnership between the New Materials Institute and RWDC. “Every single product uses a different set of ingredients based on how long that product has to be useful – shelf life to refrigerator – how fast it needs to break down and where it’s going to break down,” said Ritchie. “For a disposable good, the quicker it disintegrates after it has been discarded, the better.”

One of UGA’s strengths is its interdisciplinary approach to research. Locklin is a polymer chemist. Ritchie is a veterinary researcher and director of the Infectious Diseases Laboratory in the College of Veterinary Medicine; he has a Ph.D. in medical microbiology. They met one another shortly after Locklin arrived at UGA when Locklin’s polymer expertise was needed for a problem Ritchie was trying to resolve.

“With 17 schools and colleges, the breadth of research expertise and insight UGA can bring to bear on a problem is incredible,” said Derek Eberhart, executive director of UGA’s Innovation Gateway, a key Innovation District partner. It was Eberhart who suggested Ritchie work with Locklin on the project he was researching.

Crystal Leach, director of industry collaborations at UGA’s Office of Research, said there are multiple touchpoints between UGA and RWDC, including collaborations with research and identification of talent. “That’s the best sort of partnership,” Leach said. “And the founder [Carraway] is a pretty inspiring guy. He is truly a visionary, and he has to be making a business prosper at a time like this.”

Athens’ Mayor Kelly Girtz has followed the progress of RWDC and played a role in bringing the new manufacturing plant to Athens. “As soon as I knew they were looking for space, I reached out to them. This was before I was even mayor and was just a county commissioner. It’s enormously beneficial to Athens, particularly right now when we’re in a crisis period, to know there will be a couple hundred high-wage jobs coming to town.”

The partnership between RWDC, which is planning on creating 200 jobs in Athens, and the New Materials Institute puts Athens in the center of a new economy that will have global impact.

And this new economy will be based on biologically degradable disposable products, according to Ritchie. “From our perspective, with the correct infrastructure, what we are preparing to achieve is an applied definition of economic development.”

Girtz added that Athens is an attractive place for biotech in general, given the relatively low cost of doing business here and the labor pool that exists here for every level of manufacturing. “I love that Athens is building this entire ecosystem with research and public sector starting on campus. Then the flame is being lit as it moves to places like the Innovation District then into our great community for its home. It’s really the perfect Athens economic development story.”