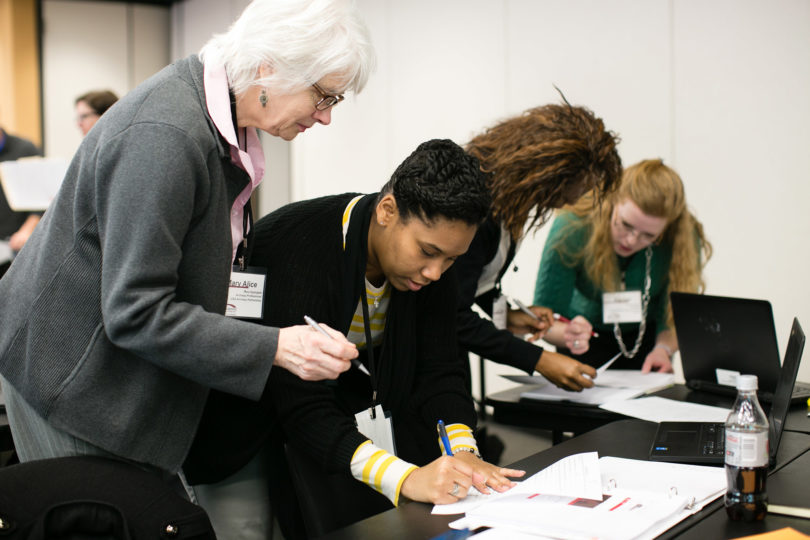 The Vinson Institute worked with an advisory committee of Georgia economic development experts to develop the 60 hours of coursework required for certification.

Kyle Fletcher is the one sitting in the classroom, but the new Georgia Certified Economic Developer Program offered by UGA is benefiting her entire community.

The executive director of the Thomaston-Upson Industrial Development Authority is using what she learns from instructors at the Carl Vinson Institute of Government, a unit of UGA Public Service and Outreach, to create a portfolio or handbook to take back to her office.

“Having that readily available is vital in what we do,” Fletcher said. “The most important thing you want to do is be prepared. As an economic developer, you need to have information on infrastructure, water, sewer lines. You need to know all of that.

“You don’t want to get asked a question and say, ‘Let me get back with you next week,’ ” she also said.
Fletcher is only two classes into the three-year program, but she said she’s already learning about resources she didn’t know were available. The portfolio project will allow Fletcher to share her newfound knowledge with colleagues back in Thomaston.

It’s one of the ways the new program, announced in January, is trying to make an immediate impact in Georgia. The Vinson Institute worked with an advisory committee of Georgia economic development experts, including potential participants, to develop the 60 hours of coursework required for ­certification.

Participants select either the Industry Knowledge or Leadership track, and gain expertise in areas of key competency-professionalism and initiative; technical and industry knowledge; analyzing, assessing and problem solving; relationship building; and leadership and influence.

Before UGA launched the certification program, the closest one was in Oklahoma, and it didn’t offer the Georgia-specific information that economic developers had been asking for.

“There are incredibly talented professionals in our state working in this area, and they’re hungry for more knowledge,” said Stacy Jones, the Vinson Institute’s associate director of governmental training, education and development. “They’re choosing to invest in themselves, which ultimately leads to improved outcomes in their communities.”

The training, said Kevin Shea, president of the Georgia Economic Developers Association, is critical to retaining talent in Georgia.

“In the local community it makes a big difference because the individuals are more aware of the issues they face on a day-to-day basis,” Shea said. “Communities can be more confident in people they have working on the front line.”

Greg Sellars has traveled to Macon, Cartersville and Athens for the first three Georgia Certified Economic Developer courses. For Sellars, executive director of the Jefferson County Development Authority, getting certified was a priority even before the new UGA program was announced.

One of the biggest benefits is hearing from his peers about how they’ve tackled challenges he might face. Sellars said the knowledge he picks up in the classroom is like “concrete that hasn’t cured,” until he is able to do something hands-on in his own community.

In the first course, the Economic Development Landscape, he learned about the importance of having a map of a community’s assets. He returned to Louisville and began taking stock of the community assets in Jefferson County. He can now recite by memory the infrastructure capacity of the county’s three industrial parks.

It is knowledge Sellars can share with prospects when they need it, keeping Jefferson County in contention for new development. That scenario—played out in communities across Georgia—leads to a brighter future, Shea said.

“We’re very glad to have been a partner in developing this program,” Shea said. “We hope to be able to put it to good use and have the state benefit in terms of jobs and investment for future generations of Georgians.”