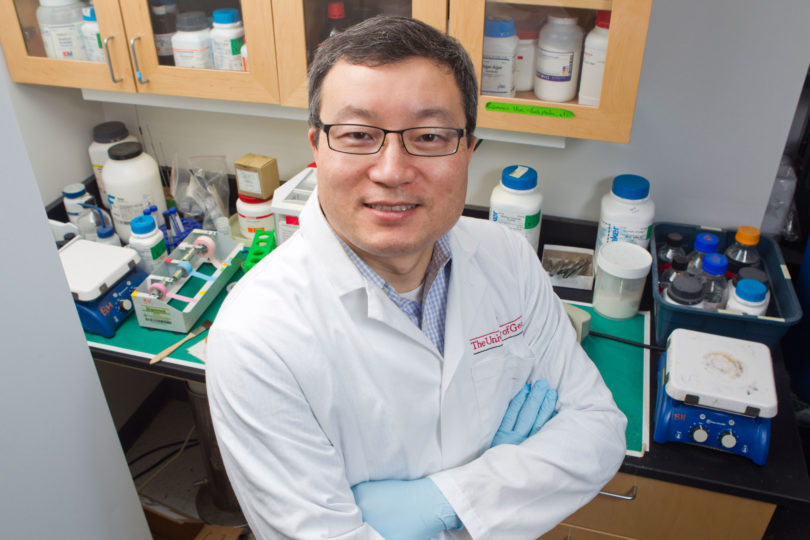 Athens, Ga. – Researchers at the University of Georgia used a common dog disease-canine parainfluenza-to build a new vaccine to protect humans and animals from the rabies virus. Developers hope the new treatment will reduce costs and increase accessibility to a vaccine for a disease that currently kills 55,000 people a year, according to the World Health Organization.

Current rabies vaccines use weakened pathogens to develop resistance. UGA professor Biao He’s technique is different. Using genetic engineering, he and his team of researchers inserted a non-viral piece of the rabies virus into parainfluenza virus 5, called PIV5, which a virus that causes respiratory infection in dogs. Using PIV5 as a delivery mechanism to expose humans and other animals to important pathogens-rabies in this case-allows them to create antibodies that will protect against future infections.

“This could be man’s new best friend in delivering vaccines,” said He, who is a professor of infectious diseases in the UGA College of Veterinary Medicine and the study’s lead author.

“This is first report of an orally effective rabies vaccine candidate in animals based on PIV5 as a vector,” said He, who also is a Georgia Research Alliance distinguished investigator and member of the Faculty of Infectious Diseases. “These results indicate this is an excellent candidate for a new generation of recombinant rabies vaccine for humans and animals, and PIV5 is a potential vector for oral vaccines.”

In the U.S., rabies are seen most often in wild animal populations. The Centers for Disease Control and Prevention reports an average of two human deaths per year from rabies in the U.S.

While death rates in the U.S. are low, rabies is expensive to control. The CDC estimates the disease costs more than $300 million annually, costs that include the vaccination of companion animals, animal control programs, maintenance of rabies laboratories and medical costs. Humans at risk for contracting rabies, like those who work with wild animal populations, even if immunized need booster shots after the fact if a rabid animal bites them. Humans infected with rabies who have not been vaccinated pay high prices for medical treatment that is time consuming and painful.

He is hopeful the new vaccine will be more effective and will require less of the drug to create resistance, reducing the cost.

“The virus we are using as a vector has been used as a component for kennel cough vaccines, so we know how to mass-produce it. And, we also know that manufacturing it won’t be a problem in terms of producing a large quantity at a cheaper price,” He said. “This becomes very important in areas where resources are limited.”

Initial results from canine tests look very promising. He hopes the vaccine will be available for animals in three to five years. Human vaccines will take longer.

“We are doing various things using the platform technology,” He said. “What we are really good at is re-engineering them to make them do the things we like them to do. So, we are looking at different kinds of pathogens to develop into vaccine form, and so far we have been very fortunate that many of them worked really well. Some of them worked better than I would have imagined.”

He’s lab also is working on vaccines for HIV, tuberculosis and malaria using this technology.

“That is the fun part of science: You come up ideas, and of course it takes a long time to push it through, and sometimes what you thought would work doesn’t, but sometimes it works out really well, and that is really exciting and fun,” He said.