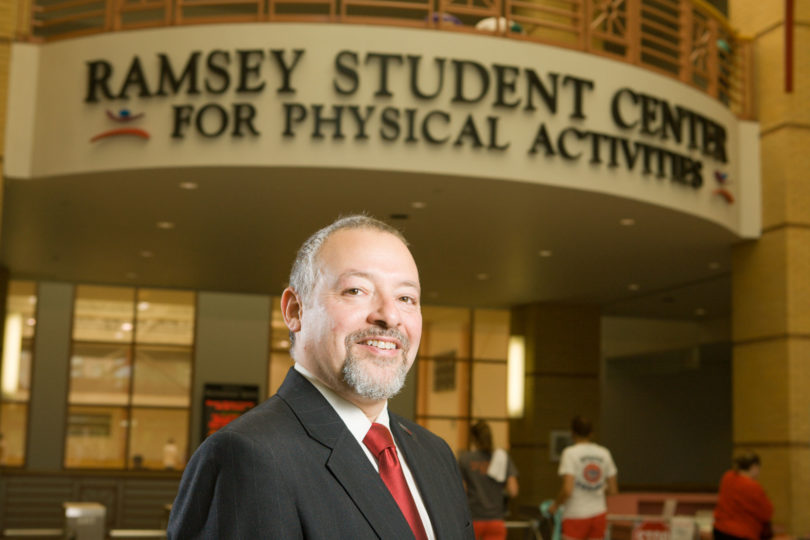 A fitness enthusiast and marathon runner

After visiting all 50 states, some 39 countries and all seven continents; after whitewater rafting on the Rogue River and going on a safari in Tanzania, what really impressed Mitch Gartenberg was getting an office with a window.

On July 2, Gartenberg became the new director of  recreational sports and the Ramsey Student Center for Physical Activities.

Coming from Syracuse University in New York, Gartenberg was drawn to the job in part due to the top-notch, nationally recognized facilities and in part due to the lure of the warm Southern climate. In Georgia, he said, “there’s more sun in the summer than in a Syracuse year.”

He said his first day on the job was “a mix of awe and satisfaction” over just how great the Ramsey Center is, with its indoors pools and track.

“It’s all really impressive to someone who’s not used to it all,” he said.

Gartenberg’s previous workplace was 57-year-old Archbold Gymnasium, where he served as director of recreation services. Before that he worked at Georgia State University and served in similar positions across the nation for the better part of the past three decades.

A fitness enthusiast and marathon runner, when he isn’t supervising Gym Central or the strength and conditioning room, he may be using them.

He works out five to seven days a week, mixing up his routine by running trails at the State Botanical Garden, lifting weights, throwing a frisbee at the intramural fields or even sweating to Zumba, a Latin beat aerobics class new to the university this year.

“I’ve always had a love of exercise—seeing what it can do for people,” he said.

One of the things he likes best about the Ramsey Center is that “everyone who comes here comes here for one reason and one reason only—because they want to.
“It’s the best way to educate because I think we learn more when we’re ready to receive,” he said.

His new position is more complex than ones he’s previously held due to the vast facilities and staff size. He’ll have to tackle the issues surrounding the center’s high volume usage among students, faculty and staff, which include waiting for equipment and long lines to enter the strength and conditioning room during the center’s peak hours between 3 and 7 p.m.

Part of the plan for  addressing these issues is maximizing space by renovating the former gymnastics practice gym and installing interstitial flooring to create two floors. The lower floor will house 9,500 square feet of strength and conditioning equipment as well as volleyball offices and the upper floor will house spaces for fitness classes including aerobics and Tai Chi. Because of the scope of this project, it will likely not be completed until at least January 2009, according to Gartenberg.

“If I could snap my fingers [and make it happen], I would do that in a second,” he said, “But that’s not the real world.”

In the meantime, Gartenberg, a “Jersey boy” at heart, will be adjusting to the South, the hundred-degree weather  and game day football crowds. And when the heat gets to him, he’ll be planning his visit to his 40th country, scheduled for December, when he’ll visit Iceland and take a dip in the Blue Lagoon.