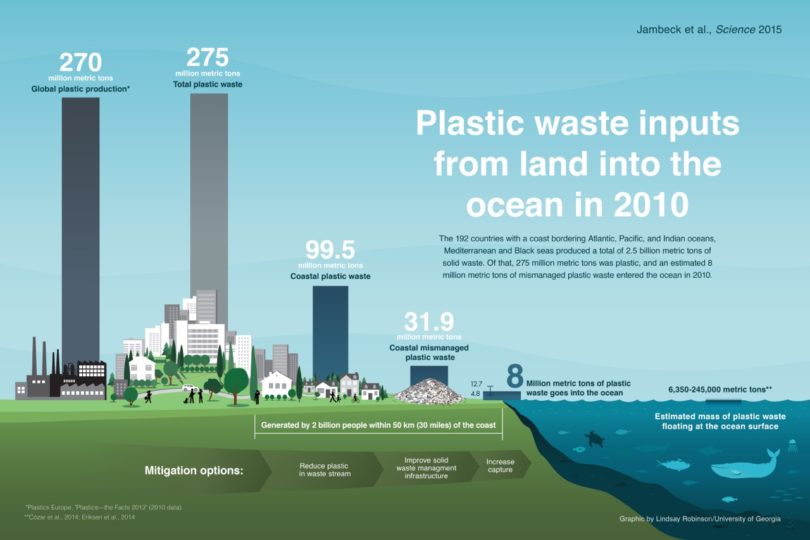 The 192 countries with a coast bordering the Atlanta

8 million metric tons of plastic enter the oceans per year

Athens, Ga. – A plastic grocery bag cartwheels down the beach until a gust of wind spins it into the ocean. In 192 coastal countries, this scenario plays out over and over again as discarded beverage bottles, food wrappers, toys and other bits of plastic make their way from estuaries, seashores and uncontrolled landfills to settle in the world’s seas.

How much mismanaged plastic waste is making its way from land to ocean has been a decades-long guessing game. Now, the University of Georgia’s Jenna Jambeck and her colleagues in the National Center for Ecological Analysis and Synthesis working group have put a number on the global problem.

Jambeck, an assistant professor of environmental engineering in the UGA College of Engineering and the study’s lead author, explains the amount of plastic moving from land to ocean each year using 8 million metric tons as the midpoint: “Eight million metric tons is the equivalent to finding five grocery bags full of plastic on every foot of coastline in the 192 countries we examined.”

To determine the amount of plastic going into the ocean, Jambeck “started it off beautifully with a very grand model of all sources of marine debris,” said study co-author Roland Geyer, an associate professor with the University of California, Santa Barbara’s Bren School of Environmental Science & Management, who teamed with Jambeck and others to develop the estimates.

They began by looking at all debris entering the ocean from land, sea and other pathways. Their goal was to develop models for each of these sources. After gathering rough estimates, “it fairly quickly emerged that the mismanaged waste and solid waste dispersed was the biggest contributor of all of them,” he said. From there, they focused on plastic.

“For the first time, we’re estimating the amount of plastic that enters the oceans in a given year,” said study co-author Kara Lavender Law, a research professor at the Massachusetts-based Sea Education Association. “Nobody has had a good sense of the size of that problem until now.”

The framework the researchers developed isn’t limited to calculating plastic inputs into the ocean.

“Jenna created a framework to analyze solid waste streams in countries around the world that can easily be adapted by anyone who is interested,” Law said. “Plus, it can be used to generate possible solution strategies.”

Plastic pollution in the ocean was first reported in the scientific literature in the early 1970s. In the 40 years since, there were no rigorous estimates of the amount and origin of plastic debris making its way into the marine environment until Jambeck’s current study.

Part of the issue is that plastic is a relatively new problem coupled with a relatively new waste solution. Plastic first appeared on the consumer market in the 1930s and ’40s. Waste management didn’t start developing its current infrastructure in the U.S., Europe and parts of Asia until the mid-1970s. Prior to that time, trash was dumped in unstructured landfills—Jambeck has vivid memories of growing up in rural Minnesota, dropping her family’s garbage off at a small dump and watching bears wander through furniture, tires and debris as they looked for food.

“It is incredible how far we have come in environmental engineering, advancing recycling and waste management systems to protect human health and the environment, in a relatively short amount of time,” she said. “However, these protections are unfortunately not available equally throughout the world.”

Some of the 192 countries included in the model have no formal waste management systems, Jambeck said. Solid waste management is typically one of the last urban environmental engineering infrastructure components to be addressed during a country’s development. Clean water and sewage treatment often come first.

“The human impact from not having clean drinking water is acute, with sewage treatment often coming next,” she said. “Those first two needs are addressed before solid waste, because waste doesn’t seem to have any immediate threat to humans. And then solid waste piles up in streets and yards and it’s the thing that gets forgotten for a while.”

As the gross national income increases in these countries, so does the use of plastic. In 2013, the most current numbers available, global plastic resin production reached 299 million tons, a 647 percent increase over numbers recorded in 1975. Plastic resin is used to make many one-use items like wrappers, beverage bottles and plastic bags.

With the mass increase in plastic production, the idea that waste can be contained in a few-acre landfill or dealt with later is no longer viable. That was the mindset before the onslaught of plastic, when most people piled their waste—glass, food scraps, broken pottery—on a corner of their land or burned or buried it. Now, the average American generates about 5 pounds of trash per day with 13 percent of that being plastic.

But knowing how much plastic is going into the ocean is just one part of the puzzle, Jambeck said. With between 4.8 and 12.7 million metric tons going in, researchers like Law are only finding between 6,350 and 245,000 metric tons floating on the ocean’s surface.

“This paper gives us a sense of just how much we’re missing,” Law said, “how much we need to find in the ocean to get to the total. Right now, we’re mainly collecting numbers on plastic that floats. There is a lot of plastic sitting on the bottom of the ocean and on beaches worldwide.”

Jambeck forecasts that the cumulative impact to the oceans will equal 155 million metric tons by 2025. The planet is not predicted to reach global “peak waste” before 2100, according to World Bank calculations.

“We’re being overwhelmed by our waste,” she said. “But our framework allows us to also examine mitigation strategies like improving global solid waste management and reducing plastic in the waste stream. Potential solutions will need to coordinate local and global efforts.”

This work was conducted within the Marine Debris Working Group at the National Center for Ecological Analysis and Synthesis, University of California, Santa Barbara, with support from Ocean Conservancy.