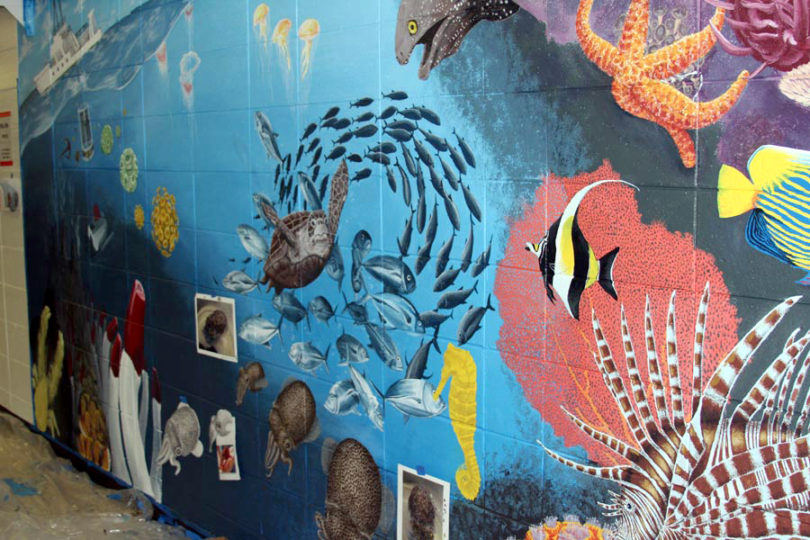 The project is a collaboration between the Franklin College of Arts and Sciences’ Division of Biological Sciences, the Lamar Dodd School of Art and the department of marine sciences.

Seascape is the first in a series of murals by scientific illustration students in the art school.

Long recognized for their accuracy and commitment to detail in creating drawings and illustrations for medical and other scientific media, the students are using their skills to brighten the halls and bring attention to the different areas of biological study at UGA.

Regina Milner, O.C. Carlisle, Matt Sandoz and Kimberly Tiernan have worked to complete the first mural this summer. The mural project is part of an elective course, Scientific Illustration. The students worked with professor Gene Wright and faculty in the marine sciences department to decide just what should be depicted and then, how to accurately do so.

“We were trying to get some organisms or systems that you might not typically see in a mural, but we tried to make it representative of a lot of different marine ecosystems,” said Brian Binder, department head of marine sciences, who worked with the students on their plans. “For us especially, marine sciences is a little bit under the radar, and a lot of biology students don’t know that they can study marine sciences at UGA. So it’s great to have such a beautiful advertisement that perhaps nudges them in that direction.”

“It’s been great to learn how to edit and develop ideas for a project like this,” said Milner, a senior scientific illustration major from Dahlonega. “It takes patience and dedication to be able to edit your own work, so that’s been an important process in this work-—creating the sketches and the layout for the mural.”

The students began the design during their spring semester class  and completed it in early August.

“Working in a professional environment with real clients and real projects is the best educational opportunity we can provide the students in the science illustration program,” said Wright, interim director of the school of art.

Murals also are planned for ecology, entomology, microbiology and cell biology. The goal is for students to complete two murals per year.