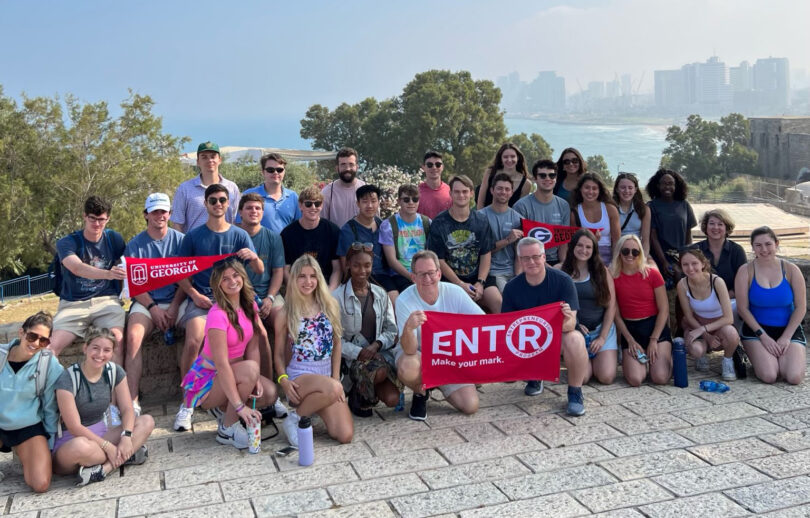 Perched on the edge of the Mediterranean Sea, Tel Aviv is a beautiful place to visit or live. It turns out it’s an even better place to start a business.

The city has become one of the world’s tech startup capitals, boasting 154 startups per capita. Those numbers mean no matter where you go, you’re bound to meet someone with the experience of getting a new idea off the ground.

That ecosystem of entrepreneurship is what drew the University of Georgia’s first cohort of Entrepreneurship Program students more than 6,000 miles from Athens to Tel Aviv this May. They spent weeks studying the social and institutional infrastructure that supports one of the world’s busiest startup hubs.

“I was struck by how adamant everyone was about leaning into the support systems and communities surrounding them,” said Laura Neely, a rising third-year student studying management information systems. “Despite a competitive business environment, the community of entrepreneurs was eager to help and challenge one another.”

Neely was one of 28 students who spent their Maymester taking the Tel Aviv study abroad course, Study of Diverse Entrepreneurship and Innovation Ecosystems. While the bulk of students came from the Terry College of Business, the trip attracted students majoring in engineering, fashion merchandising, communications and international affairs. They shared an interest in startup culture and tech companies, said Don Chambers, a senior lecturer at the Terry College and associate director of the Entrepreneurship Program.

The course covered the theoretical underpinnings of creating a healthy business ecosystem. Chambers discussed the process of turning an idea into a business through crafting business models and market development.

Students met with dozens of entrepreneurs, including people working in tiny cubicles at startup hubs and those who took companies public and now run tech incubators.

Don’t be afraid to fail

One standout speaker, according to students, was Yuval Tal, founder of the Nasdaq-listed Payoneer and managing partner of the Team8 Fintech incubator. His key message was people need to feel they will survive and learn from failure in order to commit to creating something new.

“It seemed as though every speaker and company we met consistently told us their best advice was not to be afraid to fail,” said Benjamin Abrams, a second-year student studying finance and economics. “The Israeli ecosystem was emboldened through the government creating an environment that embraces failure, and the mindset created by those policies is embedded in its entrepreneurs through the ‘I’ll figure it out’ mindset … I think seeing the results of this mindset was arguably the biggest takeaway from our trip.”

The energy of the city, with a population of 500,000 people, attracts young people from around the world and creates a synergy fueling the entrepreneurial ecosystem, explained Chambers. He wanted students to leave Israel able to describe the secret sauce to Tel Aviv’s startup success.

Government tax incentives and investments in research and development help entrepreneurship there. But the Tel Aviv community has also developed its own particular entrepreneurial characteristics, said Amelia Milam, a rising fourth-year student studying management information systems and marketing. It’s drive and the expectation that projects occasionally fail that makes a difference.

“Characteristics like reliance on your network and the go-getter drive, are factors that you can implement in your own company or as you move into the corporate world on your teams,” Milam said. “Understanding these and how to cultivate a culture around them allows you to create a mini-ecosystem like Israel’s inside of your own company’s walls.”