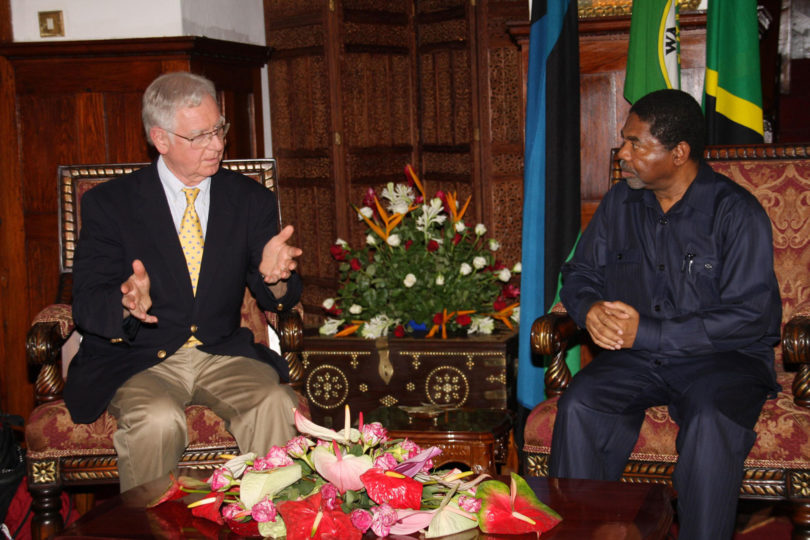 Microbiology professor Dan Colley met with the president of Zanzibar in December to form an alliance aimed at eliminating the tropical worm infection schistosomiasis from the archipelago off the coast of Tanzania within five years.

“Political support like this is critical to success,” said Colley, who is also is director of the Center for Tropical and Emerging Global Diseases and director of the Schistosomiasis Consortium for Operational Research and Evaluation, a project funded by an $18.7 million grant from the Bill and Melinda Gates Foundation through the University of Georgia Research Foundation Inc.

SCORE’s aim is to identify ways to control and eliminate the parasitic disease that affects approximately 200 million people worldwide. Elimination is defined as reducing transmission of the disease to zero and establishing an active surveillance program to detect and control any resurgence before it spreads.

Zanzibar is the study site where SCORE seeks not only to control but also to eliminate schistosomiasis. Studies to gain and sustain control of the parasitic disease are under way in Kenya, Mozambique, Niger, Tanzania and the Ivory Coast. Zanzibar is a good candidate for the successful elimination of schistosomiasis, according to Colley.

“We have support from the highest levels: the minister of health and the president,” said Colley, who also cited the existing low prevalence of the infection; a national plan to control and eliminate neglected tropical diseases, including schistosomiasis; the country’s isolated island geography; reasonably good road, water and sanitation infrastructure; and a manageable population size of 1.2 million people.

In addition, Colley said, SCORE has multiple international partners in Zanzibar who will be contributing funding, drugs, personnel and expertise.

“Elimination of schistosomiasis will require the involvement of experts across a spectrum of expertise-from behavioral change to the killing of the specific fresh water snails that are intermediate hosts,” he said. “SCORE’s long-term aspiration is to develop the information on how to eliminate this neglected tropical disease so that other countries can move their programs forward toward this end.”