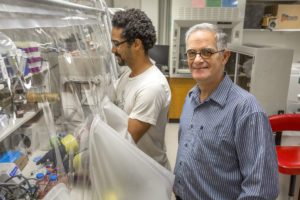 The University of Georgia’s Jorge Escalante

MIRA grants are designed to increase the efficiency of NIH funding by providing investigators with greater stability and flexibility, thereby enhancing scientific productivity and the chances for important breakthroughs. The National Institute of General Medical Sciences program also helps distribute funding more widely among the nation’s highly talented and promising investigators. Escalante’s award is one of three currently active MIRAs at UGA.

Escalante’s research group has made sustained, seminal contributions to the fields of prokaryotic metabolism and physiology. The new MIRA grant complements the long-term support of Escalante’s work in this area of research by the National Institute of General Medical Sciences since 1988. In 2010, his efforts in this field were recognized by a Method to Extend Research in Time Award, which provides 10 years of uninterrupted support.

One area of investigation by the Escalante lab has focused on the assembly of coenzyme B12, the most structurally complex coenzyme known. Coenzyme B12 is the biologically active form of vitamin B12, an essential human nutrient.

A second field of interest is the regulation of protein function by chemical modification. More than two decades ago, the Escalante research group discovered that the functions of proteins involved in metabolism at large were modulated by reversible modification of lysine amino acids contained in proteins. During 17 years of continuous support also by the NIGMS, the Escalante research group investigated this process in bacteria occupying diverse environmental niches, and rigorously established the paradigm in the field.  Escalante’s work in these two areas has resulted in the discovery of new enzymes and pathways and has established fundamental physiologic paradigms that apply to cells of all domains of life.

“The exciting feature of a MIRA is that it does not restrict research on any specific area and encourages investigators to explore new opportunities as they present themselves,” Escalante said. “Our lab will take advantage of this feature to examine current and new metabolic and physiological processes that are fundamental to all cells.”

The title of the Escalante MIRA, “Analysis of Metabolic Capabilties of Prokaryotic Cells,” provides the platform for findings that could be used to advance a range of research areas of great societal interest, such as synthetic biology, antibiotic resistance, bioremediation, drug delivery, renewable energy, metabolic stress responses and microbiome analysis.