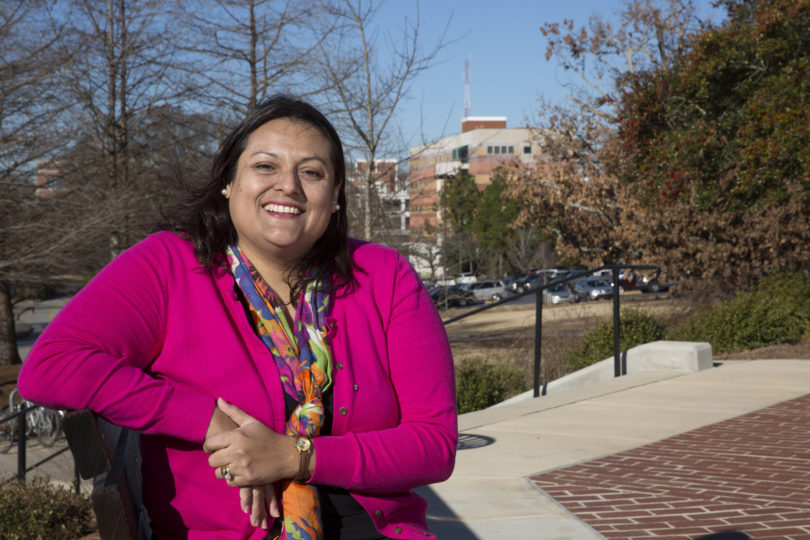 Reyna Vargas has an extensive list of excuses for why she shouldn’t be graduating this May with a bachelor’s degree in social work. To begin with, English is her second language, making each lecture and textbook just a little harder for Vargas to understand. The 39-year-old student also has lupus, a chronic illness that can cause her extreme joint discomfort, and she has a circulation disorder, which resulted in her right leg being amputated below the knee. She relies on a cane, a prosthetic leg and a Disability Resource Center van to get around UGA’s large, hilly campus.

But Vargas’ motto is “no excuses,” and she works relentlessly through each class.

“Every single class is a challenge for me,” Vargas said, “but I like the challenge.”

Vargas was born in Peru to an American mother and Peruvian father. She was never interested in learning English or earning a college degree until she moved from Lima to Elberton about 15 years ago.

Even then, Vargas worked full time to support her family until 2008, when she was stricken with a blood clotting disorder called Antiphospholipid syndrome. A clot required that her leg be amputated. That year, she had seven surgeries and had to quit her job. She later would be diagnosed with lupus, which made mobility not just hard, but painful.

Vargas said the health issues made her realize her family’s vulnerability. Her husband had to take time off work to care for her, and Vargas’ heart broke as she watched her then-5-year-old daughter, April, taking care of her instead of the other way around. She felt isolated by her condition. No one around her understood what it was like to lose a limb, but she was told the nearest amputee support group was in Atlanta.

She remembers thinking, “How in the world am I going to get to Atlanta? I don’t have a leg.”

A woman of faith, she began to believe that God wanted her to be a social worker so she could help people like herself. That belief and the need to help others inspired Vargas to finally get her degree. Although her illnesses slowed her down, she resolved not to be paralyzed by them.

She enrolled at Athens Technical College before transferring to UGA. Over time, medication has lessened the risk of her blood disorder and eased the pain from lupus. Since then, she has made an impression on faculty and staff at the School of Social Work.

Last semester, Vargas took professor Michael Holosko’s “Foundations of Social Work Research” course, which takes a quantitative approach to social work. Right away, Vargas said, she felt in over her head from the concepts and terminology. Most students in Holosko’s class form study groups to keep up with the material, but age and schedule differences made it difficult for Vargas to find a group. Instead, she sought help from her professor, meeting with Holosko regularly to avoid getting behind.

“She was willing to stay with and never give up,” said Holokso, the Pauline M. Berger Professor of Family and Child Welfare. “She had this need to embed the knowledge and retain it.”

The work paid off in the class.

“She tore it up,” Holosko said. “And she was a delight to work with.”

As Vargas completes her degree requirements, she already is helping people like herself. Last fall, she took a training course to become an Amputee Certified Peer Visitor, which allows her to visit patients who have had a limb amputated or are awaiting the surgery. The opportunity allows Vargas to support patients and answer questions.

She also has started forming a support group for amputees in Athens, something she wished had existed after her surgery. She hopes the group will begin meeting next month.

And Vargas may not be finished at UGA either. She plans to come back to get her master’s degree in social work.

Vargas credits more than hard work for her success. She said she’s had a lot of help too. Vargas is a recipient of the Gregory Charles Johnson Scholarship, which comes from privately donated funds to help students associated with the Disability Resource Center. The scholarships are intended to help students with tuition, medical expenses or to supplement living costs.

“UGA has brought me great satisfaction because the institution’s concern is to provide me the comfort I need to develop personally and professionally,” Vargas said.