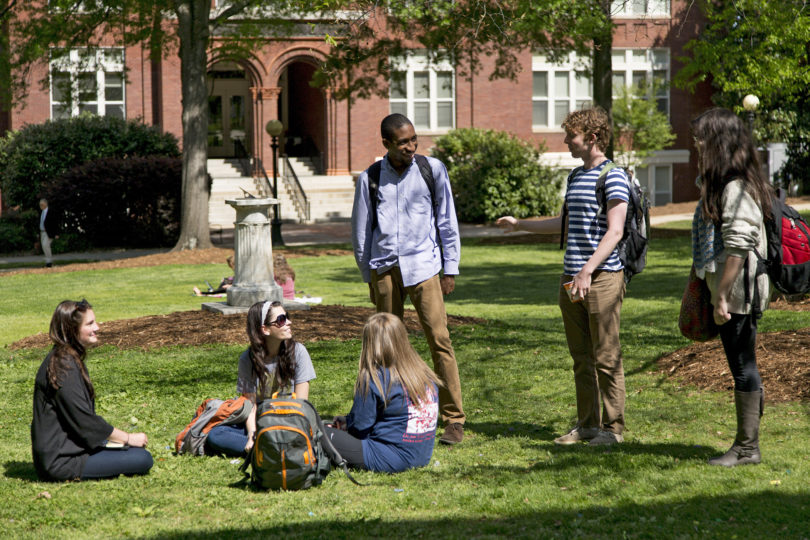 Students at the University of Georgia gather after class on the North Campus quad in front of Terrell Hall. (Credit: Andrew Davis Tucker/UGA)

UGA is beginning an initiative to preserve and restore the integrity of the historic North Campus quad. The first phase of the project will require closing two sections of the lawn for a turf restoration project until June 15. The UGA Athletic Association will be partnering with UGA by providing support for this project.

Access to the historic Arch will remain open for Commencement festivities in May and throughout the three-month project.

The North Campus lawn was included as an open green space in the 1801 plan for the building of UGA’s first permanent building known first as Franklin College and today as Old College and has been preserved since then to be enjoyed by the UGA community. Currently, it suffers from compacted soil and poor drainage, which harms the appearance and viability of the lawn. In addition, limbs from existing trees create too much shade and impede airflow, which also harm the lawn.

Improvements will aim to enhance the lawn while minimizing the effects on existing mature trees, which are essential to the character of North Campus.

The project will include selective thinning of the tree canopy, soil aeration and tilling methods to improve drainage, and sodding the lawn with the tall fescue species of grass, which grows well in semi-shady conditions.

While planning for the project, the university’s Facilities Management Division consulted with UGA turf expert Gerald Henry, the Georgia Athletic Association Professor of Crop and Soil Sciences, for input on turf type and recommendations to alleviate other problems.

During the restoration, two sections of the North Campus lawn including some sidewalks will be fenced in and closed: the northernmost section of the lawn that runs from the iron fence adjacent to Broad Street down to the Chapel, and the section of the lawn just north of Old College.

The sidewalk that runs from the Arch down the length of the quad will remain open.

Although access to the Arch will remain, construction fencing will be visible to the east of the campus monument during renovation.

Work to remove existing turf, implement soil improvements and lay sod will take place until approximately April 15. Fencing will remain in place so the lawn can become established, which is expected to be approximately June 15.