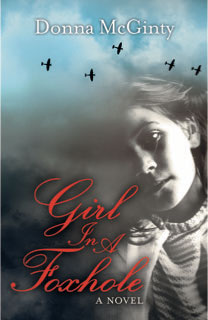 UGA alumna Donna McGinty has published a historical coming-of-age story about a young girl in the last days of World War II.

“It’s a war that is, unfortunately, slipping out of America’s collective memory,” said McGinty, who graduated from UGA in 1973 with a master’s degree in art education.

Girl in a Foxhole recounts the life of Zoe Rivers, an imaginative 12-year-old girl who lives in east Texas in the last days of World War II.

With the invasion of Japan looming, Zoe juggles a demanding grandmother, an emotionally fragile mother and a disengaged father who is stationed in Washington, D.C.

Distraught over the impending divorce of her parents, Zoe acts alone to change things. With little time, she must evict a certain man from her mother’s life, restore her father’s belief in family and shock her mother out of wildly swinging moods with a plan that endangers Zoe’s life.